Review: Waiting for a Star to Fall 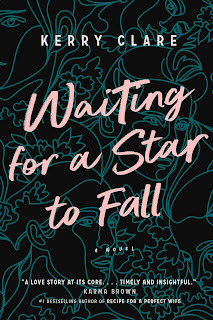 I am absolutely loving that more female, Canadian authors are publishing such smart, insightful novels these days. Kerry Clare's Waiting for a Star to Fall is the latest (just out today!) and I enjoyed it for the writing or the characters but mostly I liked it for the underlying commentary on today's society. It's intelligent, feminist, and a very good read.

Brooke has long been caught in the orbit of Derek, a rising political superstar. First he was her boss, then they were friends and she became his confidant, the one person he shared everything with. And even though she had feelings for him--it was hard to resist; he's charming and handsome, respected and beloved--she never dreamed he'd feel the same way. Derek is so much older and could have anyone he wanted.
But it turns out that who Derek wants is Brooke, and suddenly none of the reasons they shouldn't be together matter. They fall in love. And even though Brooke has to keep the relationship a secret--stealing weekends away with him, late nights with takeout after long days at work, and business trips that are always a romantic whirlwind--being close to him and her dreams of their future make everything worth it.
Then it all falls apart, and Brooke is left holding the pieces of the life they'd shared. Derek becomes embroiled in a scandal--the kind Brooke never could have imagined he'd be involved in--and she is forced to re-examine their relationship and make sense of the man she loves.
Poignant, heart-stopping, and resonant, Waiting for a Star to Fall is a story about love, the things we choose to believe, and how sometimes the path to happily ever after has to start with ourselves.

I can't remember exactly when or how I learned that Waiting for a Star to Fall was sort of inspired by Patrick Brown's political rise, fall, and rise. I think it was from Clare herself on her Instagram account (which you should follow if you're not already) but I can't be sure. (So much info comes at you all the time these days!) You don't need to know his story to enjoy the novel because it's a story that's repeated often and not just in politics. Brown, like Murdoch, was embroiled in a sex scandal but then managed to come through it all relatively unscathed and ended up being elected mayor. What was trippy for me is I lived in Barrie, which was Brown's riding when he was MP. I was in my early twenties, just like Brooke, and I went to the bar where Brown also frequented (which was hilariously called Slappin' Nellies in Clare's book). I don't know how much Clare meant for the fictional Lanark to be Barrie but that's how I viewed it in my head.

Clare's novel looks at the nuances of Murdoch's story and how we can't always know who to trust, who is telling the truth, who is getting hurt the most. We can't know the whole story or why some women don't believe other women or choose to stand by the men who have allegedly done so much harm. We know there are two sides to every story but there are layers to each side that we often lose when we, the general public who have no connection to a scandal like Murdoch's, discuss and gossip and judge. I feel like that's a major point Clare is trying to make in this novel - and, if not, that was my biggest takeaway. We can't always know even though many of us, myself included, think we do and think we know what is best.

It's been a decade since I was 23 but I remember feeling as Brooke does, at least a little. I wasn't involved with a politician nor did I go through the things she does (no spoilers here) but the feeling like you're so far past being in university (which makes me laugh now, ten years later because 23 year olds are so young to me which is unfair to them and something I'm working on. I don't want to become a "kids these days" kind of person) and you think you have life figured out but you really, really don't. You're trying to find the friends to carry you through into adulthood while also figuring out who you are (which, I will say, is an ongoing process). That feeling. That's what I remember. Trying to navigate the real world and find your values. I admired Brooke for having strong feelings, which you only really see in the flashbacks because she's so lost in the present day, because at 23 I didn't know what the hell I thought about a lot of things.

I just know some people will be annoyed at the ending. I like how Clare left it, which is surprising because normally this kind of ending frustrates me. (Yes, that's vague. No spoilers, remember?) What did sort of confuse me is there was no link back to the very first news article in the novel that reports on Murdoch's successful mayoral bid. I did read an egalley so maybe things changed but, to me, that article may have been stronger at the end of the book.
I don't always love making comparisons because all books are so different but Clare's novel reminded me a little bit of Such a Fun Age by Kiley Reid. Instead of racism, Clare's novel puts a spotlight on feminism and the Me Too movement and wraps it in a novel that is intelligent and an entertaining story.

Pick up Kerry Clare's novel because it's an entertaining, contemporary read. Stick with it because it is a perceptive, intelligent commentary of the world we're in. Waiting for a Star to Fall is a book that will stick with me for awhile because of how it made me think about how I view and consume news of the world around me.

*An egalley of this novel was provided by the publisher, Doubleday Canada/Penguin Random House Canada, via NetGalley in exchange for review consideration. All opinions are honest and my own.*
Posted by Books Etc. at 7:42 AM