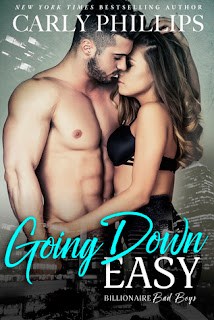 Carly Phillips is back with a new series, Billionaire Bad Boys. The first, Going Down Easy, was pretty much exactly what I expected. Damaged boy meets damaged girl and sparks fly. While it was quite predictable and not the best romance I've read, I was drawn in and am interested to find out what happens to the rest of the billionaire boys.

Meet Kaden Barnes.
Alpha-licious in the most unexpected ways, Kaden Barnes always gets what he wants.
Enigmatic and exacting, he's unable to keep an assistant for long. Until Lexie Parker arrives. She's no-nonsense, efficient and all business… She’s also hot as sin and soon starring in Kaden's dirtiest fantasies.
When their passion for each other reaches a boiling point, Kaden may think he’s calling the shots, but for this billionaire bad boy, going down easy has never felt so good.

Both Lexie and Kaden are fighting battles with mental illness. One directly, the other indirectly. I appreciated that Phillips didn't shy away from mental health but didn't try to take too much of a stand, if you will. She presented it as a natural thing that many people deal with and worked it fairly seamlessly into the storyline. I say fairly because I kind of got frustrated with Kendall, Lexie's twin sister who hasn't quite figured out how to accept what she needs to change so her mental illness does not take over her life (and therefore the lives of her family members). Kaden has a few issues of his own but I didn't find that Lexie was presented as his savior.

Lexie was a smart, sassy heroine. I was really hoping Kendall would get her act together because I could see how much her mental illness was negatively impacting Lexie's life. Lexie was such a genuinely good person that she couldn't help but drop everything when her twin needed her. How can you not root for a woman like that?

As with most romances, there were instances that were just a bit too coincidental (I couldn't quite understand how Lexie's dad could have pulled strings to have Lexie work for Kaden) but I found I could easily roll with the issues and enjoy the overall story.

Carly Phillips is definitely an author to turn to if you want a smart and sexy romance. Going Down Easy did go down easy (I couldn't help it!) and was a really easy, quick read. The first in the Billionaire Bad Boys series is a great one to toss in your bag for some weekend beach or cottage reading.


After a successful fifteen-year career with various New York publishing houses, and over 40 sexy contemporary romance novels published, N.Y. Times and USA Today Bestselling Author Carly Phillips is now an Indie author who writes to her own expectations and that of her readers. She continues the tradition of hot men and strong women and plans to publish many more sizzling stories. Carly lives in Purchase, NY with her family, two nearly adult daughters and two crazy dogs who star on her Facebook Fan Page and website. She’s a writer, a knitter of sorts, a wife, and a mom. In addition, she’s a Twitter and Internet junkie and is always around to interact with her readers. You can find out more about Carly at www.carlyphillips.com.

*A copy of this novel was provided by Rockstar PR in exchange for a review for a blog tour. All opinions are honest and my own.*
Posted by Books Etc. at 7:18 AM 1 comment:

Readalong: Then He Ate My Boy Entrancers 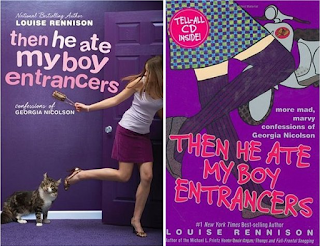 I can't believe we're over halfway through the Georgia Nicolson readalong! I think we're almost at the point where the books will be new to me. Craziness! I mentioned last time that I was feeling more optimistic about the readalong and really remembered why I adored these books when I was a teen. This time, with Then He Ate My Boy Entrancers? Er. Not so much. This was, in Georgia's words, vair vair weird. Or as Jessica of Paper Trail Diary and the mastermind behind the readalong said, Georgia's latest story was full of randomosity.

Here's the synopsis of the sixth book in the Confessions of Georiga Nicolson series:


Let the overseas snogfest begin!
Georgia and Jas are off to Hamburger-a-gogo land! Georgia plans to track down Masimo, the Italian-American dreamboat, but after a long week in America, she only succeeds in learning importantish things -- like how to ride a bucking bronco. Will Georgia reel in the Italian dreamboat? Or is she destined to live forever all aloney on her owney?

The biggest plot point in this book was Georgia and her family, accompanied by Georgia's best friend Jas, traveling to America. Georgia was thrilled about this (so thrilled, in fact, that when she learned they would be going to Hamburger-a-gogo land at the end of the last book, she hugged her father) because her latest crush, Masimo the Luuurve God, was visiting family in the US. Of course she can't track him down in Manhattan from Memphis so she has to actually take part in her family vacation. There are glimpses of a loving, family and friend oriented Georgia in the beginning and she does end up having a good time on vacation.

But this is where the randomosity and vair vair weird comes in. I present you with Exhibit A:


As the olds went off to get last-minute pressies and Libby went to get something for the kitties, me and Jas made our small but meaningful tribute to our visit to Hamburger-a-gogo land. The only good thing about the nightmare trip to Gaylords was that we got to buy some souvenir bison horn hats. We were able to wear them for our farewell nuddy-pants photo session in the hotel room.

Um. What the what? I actually don't even have words for this.

There were also far too many gay/lesbian slurs in this book. Dave the Laugh implies, on several occasions, that Masimo is gay. And at another point Libby, Georgia's younger sister, is having two of her dolls kiss and if it wasn't for the fact that it was actually one male doll dressed up like a woman, it would be "lezzie snogging" and Georgia blames her parents "because of their lack of moral code." Really? This is really what teen books were like in the early 2000s? Reading that now is incredibly appalling.

I think I've just realized a big problem I have with this series. Georgia is so completely boy obsessed that she doesn't care about anything else. Not school, not (really) her family, not even really her friends. She needs everything to be about her and her thoughts are consumed with boys (and makeup and shoes and hair and clothes). I wasn't really that kind of teenager. Sure, I thought boys were cute and I wanted to wear what everyone else was wearing, but I still realized that there were things more important than snogging my latest crush. Of course, reading it now, at 29, is much more difficult because I want to shake Georgia and tell her she's being a little idiot. She'd likely just roll her eyes and lump my advice in with that of The Olds (her parents and their friends). But really. I sometimes have a hard time feeling sorry for and reading about a teenager who is so obsessed with finding out where her new crush is staying that she can't be bothered to learn how big the United States is.

Though I had about a gazillion problems with this book, I did find myself giggling at certain exchanges. How about this foreshadowing:


[Mum] said, "I'm really looking forward to this trip, aren't you? I wonder if we will bump into George Clooney. I hope we do! He's so...woof woof."
I said, "Mum, excuse me if I am right, but did you just bark like a dog?"
She laughed, "Well, you know, he's gorgeous, isn't he? And he might really like English women."

There was also this random exchange between Georgia and her father after he came home after drinking a few beers and decided that the family was actually Irish, not English:


I said, "Dad, when you say 'villainous English,' do you mean us?"
But he wouldn't be stopped. "They changed the name to Nicolson."
I said, "What, that grand old English name? NOT. Why would they change their name from an Irish one to a Scottish one? The English, ie, us, hated the Och Aye landers just as much as the Leprechaun-a-gogo folk. More. That is why we built Hadrian's wall at the top of England...to keep the ginger-beardy folk out."
Dad was still rambling on like Paddy O'Mad. "And another thing, we look Irish. That man in Memphis spotted it. ..."
"No, he didn't, Dad. He was an American - he doesn't know where anyone comes from unless it's Texas."

I also really enjoyed how none of the Americans they met could place their accent. It's a bit true of Canadians too...I have a hard time figuring out where people are from right away. I'd have to really listen hard before I could determine if they were English, Irish, or Australian. (Though I really couldn't tell the difference between Australians and New Zealanders...sorry. I know it's the exact same as people not being able to tell us Canadians from Americans.)

The rest of the book after their vacation was a rambling mess of chasing after boys and buying shoes that were three sizes too small and having to have the doctor come to cut them off her feet (I couldn't believe how stupid she was). I think I'm going to kind of pretend Then He Ate My Boy Entrancers didn't happen because it was just so utterly bizarre. Right to the end when Gordy the kitty was eating one of Georgia's fake eyelashes aka boy entrancers.

Here's hoping the next book, Startled by His Furry Shorts isn't quite so full of randomosity! We'll be reading that one for July 26.