Review: Things to Do When It's Raining 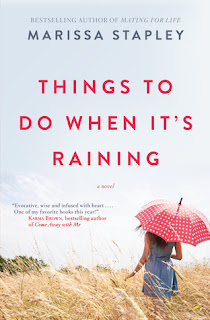 I always love finding Canadian authors who write the kinds of stories I like to read (ie not the old guard Canlit that doesn't interest me very much) so when I read Marissa Stapley's first novel, Mating for Life, almost four years ago I was thrilled (read my review here if you missed it). Finally, another Canadian author who writes well and tells a wonderful story. Fast forward a few years and I was impatiently waiting for Stapley's next novel - after meeting her at several bookish events over that time period. She's as wonderful a person as she is a writer (I'm always so happy when that turns out to be the case). As for her second novel, Things to Do When It's Raining? I didn't want to put it down.

When secrets tear love apart, can the truth mend it?
Mae Summers and Gabriel Broadbent grew up together in the idyllic Summers’ Inn, perched at the edge the St. Lawrence river. Mae was orphaned at the age of six and Gabe needed protection from his alcoholic father, so both were raised under one roof by Mae’s grandparents, Lilly and George. A childhood friendship quickly developed into a first love—a love that was suddenly broken by Gabe’s unexpected departure. Mae grew up, got over her heartbreak, and started a life for herself in New York City.
After more than a decade, Mae and Gabe find themselves pulled back to Alexandria Bay. Hoping to find solace within the Summers’ Inn, Mae instead finds her grandparents in the midst of decline and their past unravelling around her. A lifetime of secrets stand in the way of this unconventional family’s happiness. Will they be able to reclaim the past and come together, or will they remain separate islands?
From the bestselling author of Mating for Life comes a powerful story about guilt, forgiveness and the truth about families: that we can choose them, just as we choose to love.

If you've read Stapley's first novel, you'll know that she writes family dramas really, really well. Her second novel solidifies that. This story isn't just about Mae and Gabe. Nor does it focus solely on Lilly and George. It weaves a tale of two families with issues and secrets just like any other. OK, maybe they're not just like any other but I suppose that's what makes this story more interesting than others could be. Gabe and Mae didn't have the most ideal childhoods - for two totally different reasons - but they had each other, as well as Mae's grandparents, who were doing the best they could after their daughter and son-in-law died.

This isn't the easiest story to read because there's a lot of heartbreak throughout the pages. Most of the heartbreak comes from many characters being abandoned - either because of a death or because another character had (or "had") to leave. At the beginning, these characters don't handle the abandonment well at all. And you can't really expect them to either. Grief is a process and Things to Do When It's Raining allows the reader to work through the characters' grief right along with them. That's sometimes uncomfortable and I didn't always love it but I know that's what makes this book so good.

Some people may find they can't connect to the characters in this novel or that they just plain don't like them. I actually had that thought flit through my head as I was reading it. I quickly dismissed it because I think connecting with a character can look very different depending on the book. And I think readers, women reading women especially, are still conditioned to believe that we have to like every character we read. But guess what? We don't. We certainly don't like every person we come across, do we? But just because there might be a so-called connection lacking doesn't mean it's not a good character. Stapley's characters are going through a lot and, as someone who just lost her grandmother recently, I know it is not easy to be likeable while you're grieving. These characters are all deeply flawed but they are real.

Things to Do When It's Raining was a well-written and captivating family drama. Marissa Stapley has proven herself to be a master in the genre (if we want to call it that and I think I will) and I already can't wait for her next book.

*An ARC of this novel was provided by the publisher, Simon & Schuster Canada, in exchange for review consideration. All opinions are honest and my own.*
Posted by Books Etc. at 8:09 AM

Email ThisBlogThis!Share to TwitterShare to FacebookShare to Pinterest
Labels: Canadian, family, Marissa Stapley, Things to Do When It's Raining