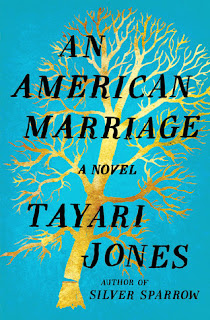 I'll be honest. I have absolutely no idea how to start this review for An American Marriage by Tayari Jones. Other than telling you I don't know how to review it. Did I find myself thinking of it often when I wasn't reading it? Yes. Was I emotionally invested? Yes, if my breaking heart was any indication. Was it good? Yes...I think so? Did I like it? Well, you've got me there. I don't actually know if I could say that I liked it. See my problem with reviewing it? Oh, and in case you missed it last week when the novel was released, Oprah has picked this book for her next book club pick!

Let's get to the synopsis while I try to gather my thoughts:

Newlyweds Celestial and Roy are the embodiment of both the American Dream and the New South. He is a young executive, and she is an artist on the brink of an exciting career. But as they settle into the routine of their life together, they are ripped apart by circumstances neither could have imagined. Roy is arrested and sentenced to twelve years for a crime Celestial knows he didn’t commit. Though fiercely independent, Celestial finds herself bereft and unmoored, taking comfort in Andre, her childhood friend, and best man at their wedding. As Roy’s time in prison passes, she is unable to hold on to the love that has been her center. After five years, Roy’s conviction is suddenly overturned, and he returns to Atlanta ready to resume their life together.

The part of the book that takes place while Roy is in prison is written entirely in letters. Mostly between Celestial and Roy but also between Roy and other characters. The thing with the letters is that you know you're not getting the whole story about any of the characters. You can sense Celestial is drifting away and that Roy isn't telling her what it's really like for him in prison. I think that this works, for the most part, because it sort of makes it seem like time has stopped. For Roy it essentially has. So, when he gets out and the story goes back to alternating first person points of view, it's jarring to realize that time has not stopped and many things have changed.

I found myself getting a bit frustrated with Roy, which is probably really unfair. I don't know what it's like to be in prison. I can imagine it's really hard to remind yourself that nothing will be the same as when you went in no matter how many visits and letters you've had with your loved ones. Roy couldn't grasp that. He expected Celestial to walk back into his arms like nothing had happened just because she was his wife. As if the bonds of marriage could withstand five years of one partner being in prison for something he didn't do. He placed a lot of hope in tiny gestures (or non-gestures) and it drove me a bit crazy because I knew it would end in heartbreak for him.

Celestial, for her part, did not have it easy. She was so conflicted and that really came through in Jones' writing. Could she abandon her husband who was in prison? Wouldn't that be just another blow to his already broken down soul? Did she have to go back to him when he was free just because they were still married? Was what she was feeling with Andre convenience or the real thing? Was it ever real with Roy? I bet you're confused just reading that. That's just a fraction of the pain I was feeling for Celestial and that was only a fraction of what she would have been feeling. (It's no joke when they say readers are empathetic!)

You might spend a good chunk of the time you spend reading An American Marriage wondering what you'd do if you were in Celestial and Roy's positions. It's easy to stand back and preach when it's not your life. I liked that Jones had many of the other characters (family of Celestial and Roy for the most part) have dissenting opinions. I don't know if any of them really stood 100% behind any of the decisions the couple made, not from before they got married to during Roy's incarceration to after he was freed.

An American Marriage was a good read even if I'm not sure I liked it and it was a difficult storyline. Tayari Jones' latest novel is a worthwhile read - perhaps for your next book club meeting!

*An ARC of this novel was provided by the distributor, Thomas Allen & Son, in exchange for review consideration. All opinions are honest and my own.*
Posted by Books Etc. at 7:56 AM