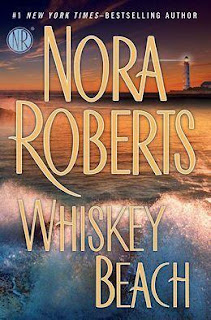 I've had a review to write of The Perfect Hope by Nora Roberts for well over a month so when I finished Whiskey Beach last night I decided to just combine the reviews into one big Nora Roberts lovefest. Sounds like fun, no? :) I'm not really a true romance reader and I don't frequent that section of the bookstore or library. My mom was the one who got me interested in Nora Roberts when she told me about the Bride Quartet series. I had noticed them because of their gorgeous covers so I gave them a shot and I was hooked! I'll start my mini reviews off with my thoughts on Whiskey Beach and then move to the conclusion of the Inn BoonsBoro trilogy.

Here's the synopsis for the new novel (released April 16th) from Roberts:


For more than three hundred years, Bluff House has sat above Whiskey Beach, guarding its shore—and its secrets. But to Eli Landon, it’s home…
A Boston lawyer, Eli has weathered an intense year of public scrutiny and police investigations after being accused of—but never arrested for—the murder of his soon-to-be-ex wife.
He finds sanctuary at Bluff House, even though his beloved grandmother is in Boston recuperating from a nasty fall. Abra Walsh is always there, though. Whiskey Beach’s resident housekeeper, yoga instructor, jewelry maker, and massage therapist, Abra is a woman of many talents—including helping Eli take control of his life and clear his name. But as they become entangled in each other, they find themselves caught in a net that stretches back for centuries—one that has ensnared a man intent on reaping the rewards of destroying Eli Landon once and for all…

This was a much different book than I was expecting. So far I've only read really romancey novels by Roberts but Whiskey Beach has a mysterious/thriller aspect to it that was really interesting. I liked this because it kept the novel from being too predictable. Abra and Eli will end up together, that's a given, but that didn't really matter to me (though I did hope they'd be able to work through their issues and that there would be a proposal by the end of the novel...and I'm not telling you if I was right or not). What did matter was finding out who the killer is. I was completely invested in Eli's life and desperately wanted his name to be cleared. I was on the edge of my seat at some points because I was so worried about what was going to happen to the characters. Roberts did a great job of keeping things hidden (sometimes literally) and revealing things at just the right moment. There were great twists, an interesting family history, romance, and a dog I really wanted to have for myself (it will make sense when you read it...). Overall, I think Whiskey Beach is a novel for those who like their romance with a little extra something. I really liked reading it and trying to figure out the mystery. This would be great for a rainy weekend read! 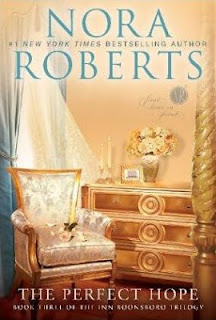 Next up, the synopsis of The Perfect Hope, the third and final book in the Inn BoonsBoro Trilogy:


The Montgomery brothers and their eccentric mother are breathing new life into the town of Boonsboro, Maryland, by restoring its historic hotel. And they’re finding their own lives revamped by love. This is Ryder’s story... Ryder is the hardest Montgomery brother to figure out — with a tough-as-nails outside and possibly nothing too soft underneath. He’s surly and unsociable, but when he straps on a tool belt, no woman can resist his sexy swagger. Except apparently Hope Beaumont, the innkeeper of his own Inn BoonsBoro. And though the Inn is running smoothly, thanks to Hope’s experience and unerring instincts, her big-city past is about to make an unwelcome — and embarrassing — appearance. Seeing Hope vulnerable stirs up Ryder’s emotions and makes him realize that while Hope may not be perfect, she just might be perfect for him...

I loved this series. Just loved it. So much so that I was actually quite sad when I finished this book. I wanted more! There's really not a whole lot that happens in the series - couples get together, buildings are built, a ghost story is solved - but I think that kind of what makes it enjoyable. I love the small town aspect of it and seeing the couples finally figure out that they're in love with each other. The Montgomery brothers are what make this series so much fun to read, I think. They're your typical guy's guy which, for me, is way more attractive than, say, a dominating billionaire (cough Fifty Shades cough.) I don't know if this was my favourite of the three but it was still a lot of fun to read. Ryder and Hope are both tough and slow to let anyone in so it was sort of even more enjoyable to read as they finally got their act together. I liked being able to see what everyone else was up to and how their stories were moving along in the background. Like I said, I loved this series and think The Perfect Hope was a great conclusion to the Inn BoonsBoro trilogy. Definitely check out this series if you're looking for a sweet and entertaining romance read.

So, there you have it. My Nora Roberts lovefest. My sister and I bought my mom another trilogy for her birthday and Christmas...er...last year?...anyway, so I have that one to dive into later this summer. Until then, happy reading :)