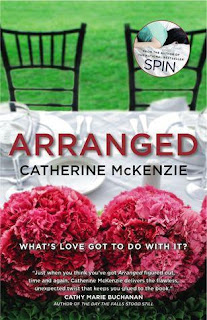 Want to know what this amazing book is about? Well, no need to wait any longer - here's the synopsis from Goodreads:

Anne Blythe has a great life: a good job, good friends, and a potential book deal for her first novel. When it comes to finding someone to share it with, however, she just can't seem to get it right.

After yet another relationship ends, Anne comes across a business card for what she thinks is a dating service, and she pockets it just in case. When her best friend, Sarah, announces she's engaged, Anne can't help feeling envious. On an impulse, she decides to give the service a try because maybe she could use a little assistance in finding the right man. But Anne soon discovers the company isn't a dating service; it's an exclusive, and pricey, arranged marriage service. She initially rejects the idea, but the more she thinks about it-and the company's success rate-the more it appeals to her. After all, arranged marriages are the norm for millions of women around the world, so why wouldn't it work for her?

A few months later, Anne is travelling to a Mexican resort, where in one short weekend she will meet and marry Jack. And against all odds, it seems to be working out-until Anne learns that Jack, and the company that arranged their marriage, are not what they seem at all.

Wondering why the name Catherine McKenzie sounds familiar? Regular readers of my blog (and I love you guys!) will know that I read her first novel Spin awhile back (read my review here!) and absolutely loved it. I had actually picked up Arranged while I was in Chapters before I read Spin but didn't buy it. Once I got Spin from the library and devoured it I went right out and purchased Arranged. I'm so glad that I did.

﻿
﻿ First of all, I LOVE that the main character's name was Anne Shirley Blythe. Yes. Named for that Anne Shirley. Anne of Green Gables was one of my favourites growing up and I know I'm not alone. Many Canadian girls grew up reading about this innocent red headed orphan. Highly recommended! Anyway, it was a little extra something in the novel that I just couldn't not mention. :)

Staying with Anne - I loved her. I think she was an amazing character and McKenzie made sure that the reader really got a sense of what Anne was like. She's a much more "with it" character than Katie in Spin but she still had some, shall we say, flaws that she had to work on throughout the course of the novel.

Anne also had a great cast of supporting characters - her best friend Sarah, boss/editor/friend William, brother Gilbert (yes, Gilbert Blythe), and sister-in-law Cathy. The only thing I'd say is that there were perhaps too many secondary characters and I didn't get a real sense of any of them. However, they were all there for Anne and that's quite important.

The story itself seems a little crazy but it really isn't. You just don't hear about arranged marriages very often anymore. I'm actually very curious as to how McKenzie came up with this idea. It's just such an interesting topic that I found myself wondering how many people have arranged marriages these days.

As for Jack? Loved him too. He really does seem like a perfect match for Anne but a good story can't be, well, good without some twists and turns. McKenzie delivers and makes you wonder how everything's going to turn out. The chemistry between Jack and Anne is just sexy enough and pretty realistic. Granted, I don't know what it would be like to jet off to Mexico to marry a man without ever meeting him before, but, hey, anything can happen on "vacation" :)

Finally, one other tidbit about this book that I loved - after a catastrophic revelation Anne is watching a marathon of Gilmore Girls on tv. As it turns out, Anne and I have the same favourite Gilmore Girls episode! It's the episode when Luke and Lorelai finally kiss for the first time (though the episode before that, Liz's wedding, is also a fave episode). I just thought it was pretty neat that we loved the same episode. Kinda geeky, I know. But I'm ok with that!
Exciting side note: While checking out Catherine's website I discovered that she has a third novel, Forgotten, coming out sometime...well, sometime. SO EXCITED! :) You can bet that I'll be reading it as soon as I can get my hot little hands on it.

Any readers from the States concerned that they can't get a copy of this easily? Not to worry! You can buy Arranged for Kindle (ok, it won't let me link which is SUPER annoying but go to Amazon.com, search for the book and it's there. Unless it's lying to me. I'm sorry if that's the case) AND Spin, Arranged, and the forthcoming Forgotten will all be published by HarperCollins in the US next year. Canadian friends, on the other hand, have no excuses. Buy Arranged and Spin right now. Read and enjoy. You won't be disappointed!