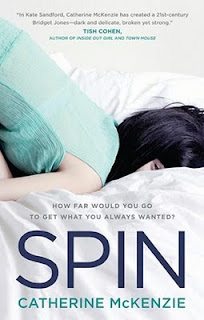 Good evening on this snowy March day! Yes. Snow in March. Welcome to Canada! This particular morning was pretty brutal as it took almost 20 extra minutes to get to work, no fun. So, I am now relaxing and watching Morning Glory.

I also have to tell you all about this book I just finished the other night. If you follow me on Twitter (@KaleyS23 if you don't!) you'll know that I stayed up MUCH too late the other night finishing a book...Spin was that book. The book came out in December of 2009 and it was one of those books I would always see on the shelves and think about getting. I was at the library last weekend and happened upon it when wandering through the stacks, so I thought...why not?

Here's the synopsis from Chapters:

Katie Sandford has just gotten an interview at her favourite music magazine, The Line. It's the chance of a lifetime. So what does she do? Goes out to celebrate -- and shows up still drunk at the interview. No surprise, she doesn't get the job, but the folks at The Line think she might be perfect for another assignment for their sister gossip rag. All Katie has to do is follow It Girl Amber Sheppard into rehab. If she can get the inside scoop (and complete the 30-day program without getting kicked out), they'll reconsider her for the job at The Line.
Katie takes the job. But things get complicated when real friendships develop, a cute celebrity handler named Henry gets involved, and Katie begins to realize she may be in rehab for a reason. Katie has to make a decision -- is publishing the article worth everything she has to lose?

To be honest, I didn't have high hopes for this book. A 30 year old boozer who clearly doesn't realize how much her drinking is completely and utterly screwing up her life? It could have gone so wrong...however, I was pleasantly surprised. Yes, it was annoying that she didn't realize that she was quickly becoming an alcoholic but she had one of those fantastic literary "journeys" while following Amber into rehab.

As I mentioned, this book was written by a Canadian author. That was one of the things that I really loved. What kind of surprised me, though, was the fact that there wasn't any mention of any Canadian cities or icons or anything. The major city Katie lived in was called The City. And the little town where she went to rehab wasn't mentioned either. The fun thing is that I think I kind of figured out where the novel took place. How? you ask? Well, let me explain. Even though the author is from Montreal I thought that the novel likely took place in Ontario (it's the province I live in so I feel like I can say this...it's where everything seems to be set in Canadian literature, movies, and television shows. It's probably all Americans think there is in our country!) There was also something else that tipped me off. When Katie goes off to rehab she mentions that it is in a teeny tiny town near where she grew up. She says that her hometown is near a Santa's Village and my first thought was Bracebridge! Of course rehab would be in Muskoka. Wouldn't you want to get cleaned up while looking at a view like this: 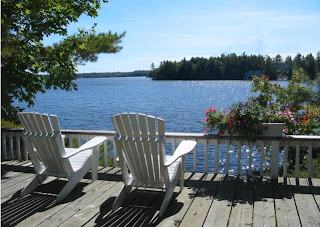 That's what I thought.
﻿To summarize the above ramblings...I loved that the author is Canadian but wish the novel had had more Canadian aspects to it. Maybe that's unreasonable, but I think that we, as Canadians, need to celebrate our culture and not make our stories so ambiguous that they could be taking place in the US. Thoughts?
Overall, I definitely recommend this book. The characters are great, the writing is well done, and the story has just enough little twists and turns to make it interesting without being a rehab roller coaster. Not only all of that, but this was a debut novel! Fantastic. I am going to have to look into finding Arranged, McKenzie's second novel. I actually almost bought it a few weeks ago when it was on sale and am now wishing I did. I'll find it and let you all know how it is!

Well, the movie is over and I'm not sure how much I absorbed...what does that say about the movie? Or me? Not sure, but I do know that it is time for bed. Night all!
Posted by Books Etc. at 10:33 PM