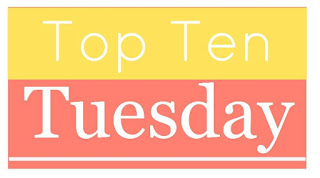 This week we're to list ten books we turn to when we need something light and fun. Instead of books, I'm going to list ten authors I love to check out when I need a guaranteed good read. Some of the stories they write about aren't all sunshine and lollipops but I always enjoy them so that's why they're on the list! What are some of your go to reads for when you need something light?


Don't forget to check out their blog for a full list of everyone participating this week!

Nora Roberts
I haven't read much by her (especially if you think about it in percentages, man, that woman writes a lot) but I've found each series I have read really sweet and enjoyable. I just recently finished the Inn Boonsboro series and I wanted there to be more. If you are looking to dive into the world of romance, start with Roberts.

Janet Evanovich
I've been reading the Stephanie Plum series since I was in high school and they're always good for a laugh. True, there may be about ten too many at this point, but they're still entertaining. I've read a couple of her others and enjoyed them as well but I always look forward to the new Stephanie adventure.

Joanne Fluke
I like to say that Fluke's Hannah Swensen series is a literally sweeter version of Evanovich's Plum series. Hannah owns a cookie shop and the books are full of recipes, hence the literal sweetness. She also has to choose between two men but sex has never been implied, let alone written about. They're fun little murder mysteries and great for a weekend read.

Talli Roland
I've been working my way through Talli's work and I just love her stories. They're funny and cute and clever and just oh so enjoyable.

Sophie Kinsella
Do I really need to explain this one? :)

Heather Thurmeier
So far I've read three of Heather's books and I've loved each of them, especially her reality TV series. In fact, I'm impatiently waiting for book number three to be released! I like to think of these ones as romance novels with sass, I guess. I literally just made that up. My point is that the books are romances at the core but there's more to it than just trying to get the guy. OK, bad explanation. Just read her books.

Carole Matthews
This is another author who I almost always love (I say almost because one of her recent Christmas books was such a disappointment to me) and enjoy reading. I think it has something to do with the fact that she's British and I adore British chick lit. I have a few of her older ones sitting on my shelves and I'd like to give some of her latest ones a try as well.

Romi Moondi
Romi's novels always have me laughing. She's got such a fabulous sense of humour and her books are so much fun to read. I can't wait for her to get down to writing now that she's in Paris (a lifelong dream of hers) and will impatiently wait for her third novel in the Year of the Chick series to be published.

Kathleen Kole
Kathleen's books have so much heart and are always amusing. Each of her books that I've read have been enjoyable and feature loveable heroines.

Heather Wardell
I have absolutely adored every single one of Heather's novels. Seriously. I think all but one have gotten five star reviews and that was only because I hated what happened to one of the characters. Even though I got it, I was still upset. I don't know what it is about her books but they're all amazing.

*Fun fact about my list...first three are American, two are Canadians now living elsewhere (Talli's in England, Heather in the US), two are British (Kinsella and Matthews), and the rest (Moondi, Kole, and Wardell) are Canadian. I guess I like to cover the map!
Posted by Books Etc. at 7:07 AM