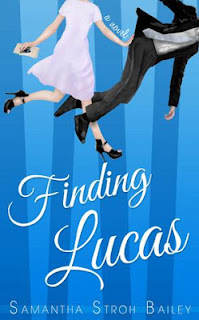 Finding Lucas was one of those novels I had been meaning to read for forever. Well, for a year (it was publishing in April 2012) anyway. Author Samantha Stroh Bailey is a fellow Canadian and we have become good Twitter friends over the past several months. I was excited to finally dive into her novel and it did not disappoint. It was sweet and hilarious and a great chick lit read.


Can you ever really go back to the past?
After five long years of living with Derek, her former bad-boy-turned-metrosexual boyfriend, Jamie Ross finally reaches her breaking point. She's had enough of his sneering disdain for her second hand wardrobe, unusual family and low-paying job as the associate producer of Chicago's sleaziest daytime talk show. When her new boss plans a segment on reuniting lost loves, Jamie remembers Lucas, her first love and the boy she'd lost ten years earlier. Spurred on by her gang of quirky friends, Jamie goes on a hilarious, disastrous and life changing hunt to track Lucas down. But are some loves best left behind?

One of the things I liked about Finding Lucas was that it felt very real - the circumstances, the dialogue, the characters, everything. I mean, there are some ridiculous situations but what chick lit doesn't have it's share of craziness (see: Confessions of a Shopaholic, hehe), right? Things could have been crazy and over the top but Samantha does a great job of keeping things balanced and it all works.

There were a few minor things that...irked me, I guess, but there wasn't anything that took away from my overall enjoyment of the novel. I was completely immersed and entertained by the story. These issues, if we even want to call them issues, were so minor, in fact, that I couldn't even recall them just a few days after finishing the book.

I love the romance in this book and part of the reason I love it is because it didn't take over. Even though Jamie is searching for an old boyfriend after leaving her twit of an ex, we got to see Jamie on a personal journey more than a hunt for a man. Does that make sense? She realizes so much about herself and that's the main point of her story. The bonus is that she finds love with an awesome guy (and I'm not telling you which guy it is!) and becomes more comfortable with herself and her family.

Speaking of family, this book is full of fabulous secondary characters. Jamie has a great best friend in Hannah and I loved reading about her story. Her parents (including step moms) are such a huge part of her life and it was so much fun reading the scenes with her family. Oh, and her roommates! Ha! Loved them. And I totally called the twist with them. "Twist?" you ask? Read the book and you'll understand. And probably laugh your ass off.

Overall, Finding Lucas was such a great read. Samantha Stroh Bailey wrote a novel that makes you laugh while also tugging at your heartstrings. I highly recommend it to anyone looking for their next chick lit read. I can't wait to read Samantha's next book!
Posted by Books Etc. at 7:33 AM