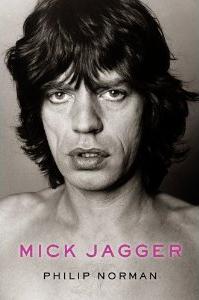 Confession: Before reading Mick Jagger by Philip Norman I would not have been able to tell you how many band members are in The Rolling Stones, let alone what some of their names are (or were). I know Mick and I know Keith but after that? Clueless. So why did I decide to read this biography if I didn't know much about the band? Because I'm intrigued by them and wondered what their rise to fame was like. I know (and really enjoy) a lot of their songs so I was looking forward to learning about their popular front man.

The first thing I learned was that Mick was not involved in the writing of this biography. From what I understand, Norman has been interviewing the band for years and took some of the information he learned from those interviews as well as information from memoirs or biographies about people from Mick's past (former managers, wives, girlfriends, and the like) and put it all together to create this bio. Is this a bad thing? No, not really. My issue was that it didn't feel very personal. Norman has written a couple of biographies on John Lennon and I'm interested to know if those bios have the same feel. To me, when biographies don't have personal statements from the subject or some acknowledgement from them when they are still living, it doesn't feel...legitimate, I suppose. In the long run, it really doesn't matter too much but I think readers should be aware of the nature of the bio before jumping in.

After finishing this book (which took me forever, by the way, as I'm a slow non-fiction reader and this book is 640 pages long), my first thought was, "How are these men still alive?!?" The amount of drugs and alcohol that were consumed is just mind boggling. But that's part of the mystique of the Stones, isn't it? How much did they do? And the other big question - how many women did they sleep with? Norman does a good job of making sure this doesn't become a little black book list and tends to focus on the relationships Mick had instead of the women he was fooling around with on the side. Which leads to a few other interesting tidbits: Mick has seven children (with four different women) and four grandchildren and he used to date Angelina Jolie. The latter was pretty mind boggling, let me tell you.

The other thing I didn't really like was that Norman was portraying Jagger in a very positive light. I could see the negatives in his personality but they were almost glossed over. He also didn't seem to be fond of Richards and was always on Mick's side when writing about the problems he and Keith had over the years. There was one particular passage that just completely slammed Keith and I had to read it aloud to my boyfriend - a Richards fan - because it was just so biased. Final issue: Mick was knighted in 2003 for services to music and, I'm not kidding here, every single time Mick was mentioned after that section, Norman referred to him as Sir Mick. Every single time. I get that he's now knighted and is a Sir but I thought it was overkill.

I know this review is coming off as very negative, but I did enjoy reading this biography. Really! It was so interesting to learn about Mick and the band. They've been around for so long (technically, 50 years but the Stones don't consider 1962 as their "birth" year as Charlie Watts didn't join until the next year, according to this article in Rolling Stone) and have a fascinating history. Surprisingly enough, no band member has ever died of overdose (see above re: extreme drug usage), although one, Brian Jones, may or may not have been murdered (nope, didn't know that either). They never really broke up either, just took a short hiatus or two. How many other bands can or will be able to say that?

Overall, I think Mick Jagger was a really interesting read. While I wasn't a fan of the way author Philip Norman wrote the bio I enjoyed learning about Jagger and the Stones.

Finally, I leave you with the video of one of my favourite Stones songs. What's your favourite?


*I received a copy of this book from Random House Canada in exchange for an honest review*
Posted by Books Etc. at 8:53 AM