Earlier this week I reviewed Libby Mercer's novel Unmasking Maya (check out my review here if you missed it). I really enjoyed it and am so happy to have a guest post from the author herself for you all! I think this is a fabulous post and I hope you all like it. Thank you to Libby for writing this post! 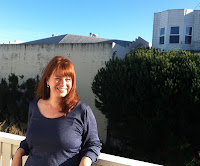 Hi Kaley, and thanks so much for having me here today!

A few years ago, back when I was running a little boutique in New York, I had a bizarre glimpse at the life I might have had. To properly explain, I’ll have to rewind a few more years to when I worked as a freelance fashion journalist.

It wasn’t a bad situation. I absolutely loved writing about fashion, but money was tight. I had to supplement my funds with soul-destroying temp jobs, and I was dying for a steady, stable position. The whole time I was a freelance journo, I applied and interviewed for editorial positions in dozens of glossy fashion mags. Well, if you’ve read or seen The Devil Wears Prada, you’ll know how high my goals were as I tried to land “the job a million girls would kill for.”

Then one day, I had an interview at Cosmo that went fabulously well. Days later, the editor called to offer me the position, but informed me it would no longer be an editorial assistant post – it would be an internship. I’d been out of college for over three years by then, and I’d already had three unpaid internships, so (regrettably) I turned her down.

Fast forward to that day in my boutique. I was chatting with a customer who happened to mention that she worked at Cosmo. Turns out, she’d taken the internship I turned down a couple of years back.

It was wild, and it got me thinking: what would my life be like if I’d taken the internship? Why did I choose not to? Sure, the idea of yet another unpaid job was my reason, but I could have gotten by (just) with my freelance work. Cosmo was major. I hadn’t been offered a position (paid or not) with a magazine of its calibre before. In retrospect, it’s kind of strange that I turned it down.

I know a lot of people believe everything happens for a reason. I’m still officially on the fence about this one, but I’m warming to the idea.

Let’s press rewind again, and revisit my life as a freelance journo. While seeking out stable employment and bringing in some income, I was also writing fiction. Not to toot my own horn (well… okay, to toot my own horn) but I did quite well in college. I majored in creative writing, and because my profs loved my stuff, I was sure the world would too. Needless to say, I envisioned a fabulous life just around the corner as a successful author.

Pride cometh before the fall, of course. Immediately after graduation, I started sending out my stories. And I was met with rejection after rejection for year after year. But that didn’t stop me. Even though all those rejections were tough to endure, I never gave up. And I never stopped improving. This is key. And this is what makes me think perhaps everything does happen for a reason. If someone had taken a chance on me way back when, it would have been disastrous. My writing was pretentious and I hadn’t fully grasped story structure. No doubt my book would have flopped.

So even though my twenty-two year old self would have been mortified if she’d known it would take me/her/us so long to reach published author status, if I could travel back in time and tell her one thing, I’d say, “Chin up, babe. There’s a reason for all this rejection. You’re not ready yet.”

What do you think? Do you believe everything happens for a reason?

Author Bio:
Born and raised in the Midwest, Libby Mercer’s adventurous spirit kicked in after graduating from high school, and she’s since lived in Boston, NYC and London. San Francisco is the city she currently calls home. For several years, Libby worked in fashion – first as a journalist and then as a shopkeeper. She also dabbled in design for a while. Even through the crazy fashion years, Libby never let go of her dream of being a published author, and has since developed her signature writing style, crafting quirky chick lit/romance hybrids. Fashioning a Romance was her first published novel, and Unmasking Maya will be her second. Libby has a third novel, The Karmic Connection, scheduled for release in 2013.