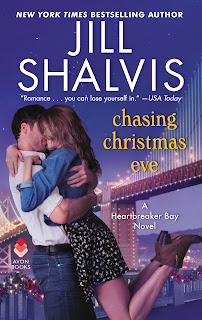 It may be Thanksgiving here in Canada (Happy Thanksgiving, friends!) but I'm getting the holiday spirit going already with Chasing Christmas Eve by Jill Shalvis. This is the latest in her HeartbreakerBay series but you don’t have to read the others to enjoy Colbie and Spence’s story. Of course, if you’re like me and haven’t read them you’re probably going to want to go back and visit the stories Shalvis has already written. That’s how much fun and how sweet this novel was!

Here’s the synopsis via Goodreads:

Meet cute...Run for the hills—temporarily. That's Colbie Albright's plan when she flees New York for San Francisco. Wrangling her crazy family by day and writing a bestselling YA fantasy series by night has taken its toll. In short, Colbie's so over it that she's under it. She's also under the waters of a historic San Francisco fountain within an hour of arrival. Fortunately, the guy who fishes Colbie out has her looking forward to Christmas among strangers. But she's pretty sure Spencer Baldwin won't be a stranger for long.
Make merry...Spence's commitment to hiding from the Ghosts of Relationships Past means he doesn't have to worry about the powerful—okay, crazy hot chemistry—he's got with Colbie. Just because she can laugh at anything, especially herself... just because she's gorgeous and a great listener just because she gets Spence immediately doesn't mean he won't be able to let Colbie go. Does it?
and hope for a miracle.Now the clock's ticking for Colbie and Spence: Two weeks to cut loose. Two weeks to fall hard. Two weeks to figure out how to make this Christmas last a lifetime.

It was really easy to see why Spence would fall for Colbie. I loved her too! She was smart, funny, and down to earth. She had issues – which reared its ugly head a few times over the course of the novel – but she seemed committed to working through them. After running away, of course. I do wish she was more firm with her mom and brothers at the end because they really were taking advantage of her. I get that she’s a fixer – I kind of am myself – but she was so focused on that that she couldn’t see that maybe her life could be different and oh so much better with Spence and San Francisco.

It was also easy to see why Colbie loved San Francisco. I’ve never been but it’s on my travel bucket list. The area Spence and his friends live in sounded so great and had a nice small town vibe in the middle of a big city.

Spence had a really awesome, loyal group of friends which are his self-made family. I loved the friendship between all of them. They’re super protective of him because other people from his past have taking advantage of him. For the most part, that’s sweet. But sometimes their protectiveness became a little extreme. I get that they might assume Colbie is a reporter since they know virtually nothing about her but I also couldn’t quite see why there was so much fuss about Spence. Sure he’s crazy smart and rich and good-looking but…I don’t understand why the media was crawling all over him. I also really didn’t understand why Elle was so crazy Mama Bear protective of Spence. It was honestly annoying to read and I wish she, and some of the others, gave him the chance to fall in love instead of blocking his relationship with Colbie whenever they could. They liked her – and it was sweet that the ladies of the group immediately took Colbie under their wing – but instead of allowing her to share her background in her own time, they forced the issue.

The romance was totally believable in this story, even if it happened really quickly. Colbie and Spence had so many common personality traits and differences where it mattered that it made so much sense for them to fall for each other.

I’m finding that most Christmas romances these days aren’t really too Christmassy. So it wasn’t that weird reading a book set in the three weeks leading up to Christmas when it was October and unseasonably warm here in Ontario. But, had I been reading this in December and wanted a romance with all of the Christmas trimmings, I may have been disappointed. As long as you don’t expect Santa or tinsel at every turn, I think you’ll enjoy the hints of holiday throughout this book.

All in all, Chasing Christmas Eve was a really nice read. Jill Shalvis is so talented at creating worlds that are sweet and so much fun to read about. I read this one really quickly and my heart was full at the end for Colbie and Spence. I’d consider that a win.

Excerpt
At the unexpected sight of Spence, Colbie startled hard. How was it that he was the one who needed glasses and yet she’d not seen him standing against the window? “No, I don’t kill a lot of people,” she said cautiously because she was wearing only a towelin front of a strange man. “But I’m happy to make an exception.”
He laughed, a rough rumble that was more than a little contagious but she controlled herself because, hello, she was once again dripping wet before the man who seemed to make her knees forget to hold her up.
“I didn’t mean to scare you,” he said and pushed off the wall to come close.
She froze, but he held up his hands like, I come in peace, and crouched at her feet to scoop up the clothes she hadn’t realized she’d dropped.
Leggings, a long forgiving tee, and the peach silk bra-and-panty set that hadn’t gotten so much as a blink from the TSA guy.
But it got one out of Spence. He also swallowed hard as she snatched them back from him.
“Hold on,” he said and caught her arm, pulling it toward him to look at her bleeding elbow.
“Sit,” he said and gently pushed her down to a weight bench. He vanished into the bathroom and came back out with a first aid kit.
It took him less than two minutes to clean and bandage the scrape. Then, easily balanced at her side on the balls of his feet, he did the same for both her knees, which she hadn’t noticed were also scraped up.
“You must’ve hit the brick coping as you fell in the fountain,” he said and let his thumb slide over the skin just above one bandaged knee.
She shivered, and not from the cold either. “Not going to kiss it better?” she heard herself ask before biting her tongue for running away with her good sense.
She’d raised her younger twin brothers. Scrappy, roughhouse wild animals, the both of them, so there’d been plenty of injuries she’d kissed over the years.
But no one had ever kissed hers. Not surprising, since most of her injuries tended to be on the inside, where they didn’t show. Still, she was horrified she’d said anything at all. “I didn’t mean—”
She broke off, frozen like a deer in the headlights as Spence slowly lowered his head, brushing his lips over the Band-Aid on her elbow, then her knees. When he lifted his head, he pushed his glasses higher on his nose, those whiskey eyes warm and amused behind his lenses. “Better?”
Shockingly better. Since she didn’t quite trust her voice at the moment, she gave a jerky nod and took her clothes back into the bathroom. She shut the door and then leaned against it, letting out a slow, deliberate breath. Holy cow, she was out of her league. He was somehow both cute and hot, and those glasses . . .

*A copy of this novel was provided by the publisher, Avon Books/HarperCollins, in exchange for review consideration. All opinions are honest and my own.*
Posted by Books Etc. at 8:55 AM