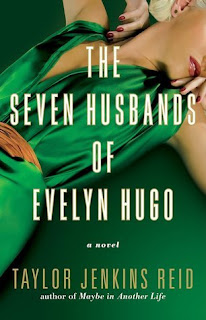 Like many avid readers, I love finding that book that grabs hold of you from the beginning and refuses to let you go. It's that story that you want to finish because you love it so much but know you're going to be devastated when you turn the last page. The Seven Husbands of Evelyn Hugo, Taylor Jenkins Reid's latest novel, was that kind of book for me. I. Loved. It.

Here's the synopsis, from Goodreads:

From Taylor Jenkins Reid comes an unforgettable and sweeping novel about one classic film actress’s relentless rise to the top—the risks she took, the loves she lost, and the long-held secrets the public could never imagine.
Evelyn Hugo is finally ready to tell the truth about her glamorous and scandalous life. But when she chooses unknown magazine reporter Monique Grant for the job, no one in the journalism community is more astounded than Monique herself. Why her? Why now?
Monique is not exactly on top of the world. Her husband, David, has left her, and her career has stagnated. Regardless of why Evelyn has chosen her to write her biography, Monique is determined to use this opportunity to jumpstart her career.
Summoned to Evelyn’s Upper East Side apartment, Monique listens as Evelyn unfurls her story: from making her way to Los Angeles in the 1950s to her decision to leave show business in the late 80s, and, of course, the seven husbands along the way. As Evelyn’s life unfolds through the decades—revealing a ruthless ambition, an unexpected friendship, and a great forbidden love—Monique begins to feel a very a real connection to the actress. But as Evelyn’s story catches up with the present, it becomes clear that her life intersects with Monique’s own in tragic and irreversible ways.
Filled with emotional insight and written with Reid’s signature talent, this is a fascinating journey through the splendor of Old Hollywood into the harsh realities of the present day as two women struggle with what it means—and what it takes—to face the truth.

Reid's novels are always well written and The Seven Husbands of Evelyn Hugo, while a bit different from her other stories, was no exception. Her characters jump off the page, the story flows, and you can perfectly picture yourself in the setting of the novel. Which, seeing as half of the book took place in the past, is quite impressive.

The entire book is told in first person - but that first person actually changes. The story starts with Monique (actually it starts with an "article" that gives just enough information about Evelyn Hugo so the reader fully understands her star power) but when Evelyn and Monique are working on the memoir, Evelyn's memories are told in first person as well. That sounds confusing but I didn't even notice it until I started working on this review. That's how seamless it was.

This novel has all of the best kind of drama that really helps the story grab you. There are family issues (Evelyn's upbringing left a lot to be desired and Monique's father died when she was young) and career struggles (Evelyn had to work to prove herself and Monique's journalism career isn't going the way she'd hoped). Relationship problems seem to be at the heart of the story (seven husbands, duh) but as Evelyn discusses her marriages you realize the husbands really aren't the point of the story, or her life.

I loved reading about Evelyn's career. Old Hollywood is so interesting (and always makes me wish I had taken more film courses in university). Reid balanced just enough historical details - what it would have been like when actors had contracts with studios, for example - without bogging down the overall storyline.

Evelyn fought for pretty much everything in her life. She's strong. She's unapologetic about using whatever tools she has at her disposal to get what she wants. She's not entirely likeable but she's captivating and a character I still haven't been able to get out of my head.

Monique was sort of a secondary character in the novel but I think Reid did a great job of showing her growth throughout the novel. Monique started out in a supporting role - in her life and against Evelyn - but as the story went on, and as she learned more about and from Evelyn, she began to turn into the leading actress of her own life. (Yeah, that's a bit cheesy but, come on. The story is about a famous actress. I couldn't not make those comparisons :) ) Evelyn changed Monique's life, and not just because of certain stories that come to light, but also by knowing and learning from this strong, formidable woman

I really wasn't sure how the whole story was going to play out. Reid kept me guessing and I actually gasped in a few places, and I'm pretty sure my jaw dropped too. The twists added a whole new, and wonderful, dimension to the story.

The Seven Husbands of Evelyn Hugo was the first book in a long time that gave me an immediate book hangover. I didn't know what to do with myself after I finished Taylor Jenkins Reid's newest novel. I wanted to reread it and also thrust it upon every other reader (and non-reader) I knew because it's just that good. This is a novel you are definitely going to want with you this summer and it's one that just might be my favourite of 2017.

Make sure you check out the other reviews that have already been posted as part of this blog tour. We were all in love with Evelyn and this novel! 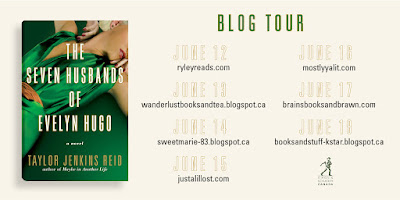 *An ARC of this novel was provided by the publisher, Simon & Schuster Canada, in exchange for a review for the purposes of a blog tour. All opinions are honest and my own.*
Posted by Books Etc. at 8:07 AM