A few months ago a bunch of Toronto area bloggers got together for an event and they got to talking about how they all wanted to do a reread of the Harry Potter series. It turns out there are a lot of people who want to revisit the world J.K Rowling created! Michele of Just a Lil' Lost put together a sign up post and opened it up to other readers and bloggers. As of mid-January there were 25 people signed up, which is pretty cool. It's a very casual readalong as you can read at your own pace as there aren't any prompts or anything. We're all staying connected by posting on Twitter or Instagram with #HPreread. The goal is to read a book a month. My goal is to put up some sort of post after every reread but I haven't really decided how each month will look. Some may be longer than others and some may be more rambling. They definitely won't be "true" reviews because, hello, almost everyone has read these books. Though I'd recommend not reading each post unless you've read the entire series. It's all up in the air at this point so we'll see how the year goes! First up, my thoughts on my reread of book number one, Harry Potter and the Philosopher's Stone.

Before starting the book I was trying to remember how old I was when I first came across Harry Potter. I know I was still in elementary school and I'm 95% certain only the first three books were released. A friend of the family, who had a daughter the same age as my younger sister, told my mom about these awesome magical books and said we had to read them too. I am so thankful for that recommendation! Goodreads tells me that Prisoner of Azkaban and Goblet of Fire were both released in 1999 so that must have been the year we read them meaning my sister was 9 and I was 12. So, assuming that's correct, Harry Potter has been part of my life for about fifteen years. That's over half my life. Kind of crazy, no?

I wasn't sure what to expect with this reread. It's been a long time since I've reread all the books (at least four years but probably closer to five or even six) and I wondered if the magic would still be there for me. I knew exactly what was going to happen after all (the last time I reread them the final book had yet to be released). On a Saturday morning I settled myself on my couch, under a blanket and with a cup of tea, and found that I was amazed at how happy it made me to be rereading a favourite book. I had been having a crap week and everything seemed better after I started reading. Amazing what books can do, isn't it? 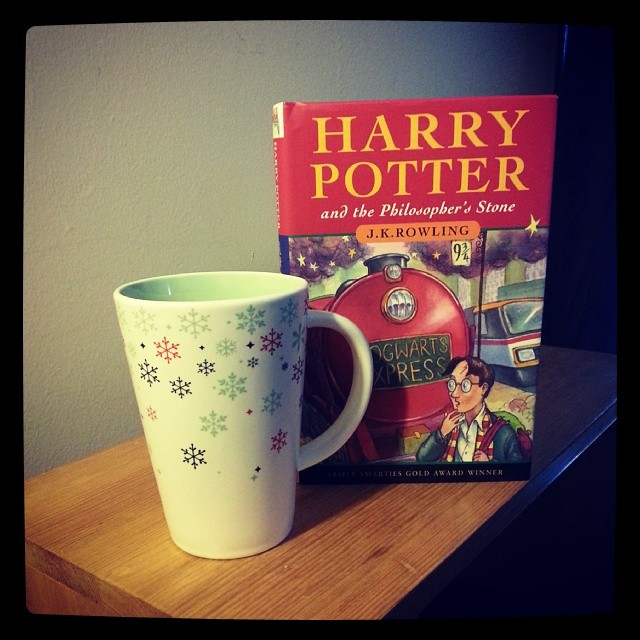 I was really looking forward to seeing what I had missed the first few times I read the series. Rowling does such an awesome job of hiding seemingly innocent details in the story that you don't realize until later how extremely important they are. The jinxed broom during the Quidditch match and the Mirror of Erised are important parts of this story and I liked rereading those scenes to see what I missed the very first time I read the book. I also found the detention scene very interesting. Draco, Harry, Hermione, and Neville have to go into the Forbidden Forest with Hagrid and Fang and at one point Hagrid says, "There's nothin' that lives in the Forest that'll hurt yeh if yer with me or Fang." (page 183) Is that a bit of foreshadowing, particularly with the spiders in Chamber? I had also forgotten that Hagrid gives Harry a photo album full of pictures of his family but I did consciously notice this time around that Harry had never seen his parents until he looked in the Mirror of Erised. I can't imagine what that would have been like. Something else that I had never noticed before was this exchange between Dumbledore and Harry at the end of the book when Harry is recovering from meeting Voldemort. Harry asks why Voldemort would want to kill him and this is Dumbledore's reply, "Alas, the first thing you ask me, I cannot tell you. Not today. Not now. You will know, one day...put it from our mind for now, Harry. When you are older...I know you hate to hear this...when you are ready, you will know." (page 216) Had anyone else recalled that exchange? It takes so long for Harry to finally realize the reason Voldemort wants him dead that I didn't think about what Dumbledore told him in the first book.

One of the interesting and sort of unimportant things I noted included the realization that Lily, Harry's mother, and Petunia, his aunt, are both named after flowers. I also found myself wondering what it would have been like had there been a magical sort of Google available to the students. You know how much easier it would have been for Harry, Ron, and Hermione to find Nicholas Flamel if they were just able to pop it into a search engine? Actually, now that I think about it, I bet that sort of thing would have been banned from the school and students would still be made to use the library!

Next, let's talk about the feelings. I found myself getting increasingly excited as Harry received his first letter, went off to Diagon Alley (love love love that part of the book), and finally traveled to Hogwarts. I love that we learn about the magical world right along with Harry and I wonder if that's what makes it so easy to relate to. This boy is also learning all these new things like we are but he's accepting them so we should too. Interesting thought. I was filled with mixed emotions whenever Draco showed up because, while he's a horrible boy in the first books, he eventually comes into his own, in a positive way, in the very end. Same goes for Snape. I really liked reading the parts with him because of what we learn at the end of the series. I was also reminded how much I love the chess scene near the end of the story. Ron has always been my favourite and I realized how important this scene is in setting the stage for his and Harry's friendship. He takes control of the giant chess game and Harry allows that because he realizes he can't do it alone (sure, he struggles with that eventually but let's not worry about that now). The same goes for Hermione and the potions but for some reason the chess scene stands out more for me. Finally, and most importantly, I got goosebumps during Dumbledore's end of year speech as he awarded Ron, Hermione, Harry, and Neville points and explained why he was doing so. I was surprised by that because I knew what was coming but I was still completely affected by it.

I tweeted 15 times while doing the reread. I liked this because I know I would like to read tweets from people as they reread Harry Potter and it allows others doing the reread know that I'm working my way through the book. On the other hand, it took away from the solid reading time I had set aside. Every once and awhile I would stop, pick up my phone, tweet something funny/interesting/emotional and then go back to reading again. It sort of took me out of the story too much and I wonder if I'll tweet as much as I read the other novels. I used Storify to create a compilation of all my #HPreread tweets so use this link to check 'em all out if you missed them the first time around.

The Harry Potter movies have become such a huge part of the whole universe Rowling created and I found it hard to remember how I pictured the characters when I first read the books. All I see and hear in my head now are the actors' faces and voices. This isn't necessarily a bad thing but it reminds me why I love reading so much. I love being able to create my own little picture of the characters and world in my head.

Finally, I realized what I love about this series, and the first book in particular. It's the world building Rowling does. I adore the magical world of Harry Potter and I'm able to really understand what's in it because of the way Rowling writes. She has every little bit of information about the world - even if it's not in the book - so we, the reader, know why things are the way they are, like how many Knuts are in a Sickle (It's 29 for those who forgot. 17 Sickles to a Galleon). Speaking of which, can we have that Harry Potter encyclopedia already? :)

What I've learned from this month's reread and what I'll continue to do going forward: