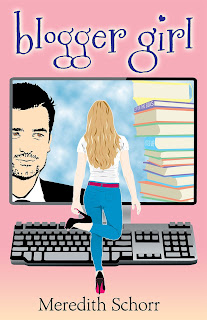 I was so excited when author Meredith Schorr asked me to be a part of her launch for her new novel Blogger Girl. I wrote a guest post on her blog back in July, shared the cover reveal earlier this month, and today I'm finally sharing my review! I was really looking forward to reading this novel and it happily exceeded expectations. I loved it!


What happens when your high school nemesis becomes the shining star in a universe you pretty much saved? Book blogger Kimberly Long is about to find out.
A chick lit enthusiast since the first time she read Bridget Jones’s Diary, Kim, with her blog, "Pastel is the New Black," has worked tirelessly by night to keep the genre alive, and help squash the claim that "chick lit is dead" once and for all. Not bad for a woman who by day ekes out a meager living as a pretty, and pretty-much-nameless, legal secretary in a Manhattan law firm.
While Kim's day job holds no passion for her, the handsome (and shaving challenged) associate down the hall is another story. Yet another story is that Hannah Marshak, one of her most hated high school classmates, has now popped onto the chick lit scene with a hot new book that's turning heads--and pages--across the land. It's also popped into Kim's inbox--for review. With their ten-year high school reunion drawing near, Kim's coming close to combustion over the hype about Hannah’s book. And as everyone around her seems to be moving on and up, she begins to question whether being a “blogger girl” makes the grade in her off-line life.

I couldn't wait to read this one and not just because I've enjoyed Schorr's previous work. I was excited about this novel because I couldn't wait to learn about the main character, Kim. A heroine who's a chick lit book blogger like me? Sounds amazing! I think I definitely could have been friends with Kim. We have a love for the same genre, both write blogs while working in a job that's not so exciting (ok, well, I'm not currently working but when I was my blog work was usually more enjoyable than my day job), we're very close in age, and she just seems like an awesome person. The only thing we may not be able to get over is the fact that she's 4'11" and I'm 6'. That and the fact that she's fictional. :) Kim was a fabulous heroine. She was just flawed enough to make her likeable and her flaws were completely normal and believable. She has qualities that I think every reader can identify with, especially if they're trying to figure out what it is they love to do. I really liked that Kim struggled with her jealousy of Hannah because it (and Nicholas) forced her to face her hidden desire and goal. Kim felt incredibly real and that made her a great heroine. She also had some fabulous friends and they all made for solid, and entertaining, secondary characters.

The romance in this novel was great. I knew Kim would probably end up with Nicholas but I wasn't sure how or when it was going to happen and what sort of obstacles they might face. The issues that did come up were relatable and nothing was over the top. I was rooting for Kim and Nicholas and I hoped they would have a happily ever after.

I liked that Schorr included tweets and bits of reviews in the text. It wasn't too much so it was nice to see these parts of Kim's online life and it helped show what kind of reviewer Kim was. I found it amusing that two very popular chick lit authors were mentioned...sort of. Schorr cleverly changed the names but it was still pretty obvious who she was referring to. I also liked that Kim was a defender of chick lit - the genre and the label. A lot of people hate the term "chick lit" and refuse to use it. I don't see a problem with it and I think we should embrace it. I also wish that people would stop judging others based on their reading tastes. Everyone likes what they like and no one should be made to feel lesser because of what the cover of their book looks like.

I adored Blogger Girl by Meredith Schorr. I think it's a fabulous novel that celebrates all things chick lit. Of course, I probably loved it a little bit more because Kim is a blogger like me but I think this novel is one that all chick lit lovers will enjoy. I loved it so much that I was still thinking of it days after I finished it. Hey, Meredith...how about a sequel? I think there's lots you could do for a second (or third) novel about Kim! :) Blogger Girl is funny, sweet, a little sexy, and so so good. Read it! You won't be disappointed.

*I received a copy of this novel from the author in exchange for an honest review*
Posted by Books Etc. at 6:22 AM