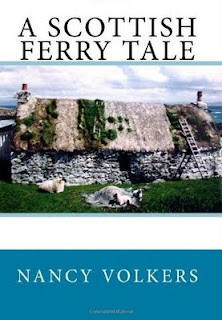 When I first saw that Samantha at Chick Lit Plus was hosting some blog tours it took me a little while to decide if I wanted to take part, but I'm very excited about the few that I'm doing (and the list just keeps on growing!). When I heard that Samantha was organizing a tour for Nancy Volkers' A Scottish Ferry Tale I immediately signed up. I gotta admit, it was basically because of the title - I've got quite a bit of Scottish blood in me. Once I read the synopsis though, I was definitely in. Here's the synopsis from the back of the book:


Once upon a time, Cassie Wrentham goes to Scotland and gets her heart broken. She is cynical enough to close the door on true love, but hopeful enough not to lock it. Instead she escapes, to an island off the west coast, where she meets someone who could change her life...if she'd only allow it. Does she? And who is this life-changing person, anyway? Are there dragons? Fairy godmothers? Chocolate cake? What about happily ever after?

I'm really glad that I got a chance to read this book and I want to thank Samantha and Nancy Volkers for making that happen!

Overall, I really enjoyed this book. My favourite part was the setting (obviously) but it was especially because of the way Scotland played such a large part in the story. Volkers really played up the fairytale feeling of Scotland by placing Cassie in such a remote (ie not urban) area. Somehow, having the story set in Scotland made the love at first sight theme much more believable.  In my head Scotland is such a magical place so it really isn't hard to believe that Cassie and Ralph could have fallen for each other so quickly. And there are sheep! You have to love how livestock always make an appearance in books or movies set in Great Britain and Ireland.
I also liked that Cassie was close to my age in this novel. I could definitely relate to her indecision about school and work and what she wanted to do with the rest of her life. What I'd like to know is how the heck she had so much money to travel back and forth from the States to Scotland so many times! I just finished up five years of post-secondary school last April and I didn't have enough money to even get to Scotland once! That, however, is only a minor annoyance and one that is easily overlooked.

One thing that I couldn't get past was the age gap between Cassie and Ralph - it was about twenty years. Anyone else find that kinda hard to accept? I know it happens, my best friend's mom and dad are sixteen years apart, but that doesn't mean I can easily picture it. In fact, I realized the other day while watching Leap Year that, in my head, Ralph looked like Matthew Goode...

Not totally sure why since Leap Year takes place in Ireland, not Scotland, and Matthew Goode is younger than Ralph is supposed to be, but there you have it. In my imagination, Matthew Goode = Ralph, and that made it slightly easier for me to read.

I don't want to give too much away, so I apologize for the vague descriptions. At one point someone tells Cassie that it is hard to get a hold on Ralph and to really figure out what he's like. I felt like this was a good way to describe Cassie too. She's still quite young but she's got such an old soul. She would jet over to Scotland for a boyfriend for only a week (kind of dependent on the boy?) but has no problem going to a small island alone (therefore, independent). She cares about school and finding a good job but parts of her late teen years are divulged and it just seems so completely out of sync with what her goals are. Cassie also manages to have, and I cannot think of another way to phrase it, snooty pastimes - poetry, plays, music - but manages not to be stuck up. She knows all sorts of plays and playwrights but doesn't assume that she is better than everyone else because she knows that so-and-so wrote some play that is the most magnificent thing to ever grace the stage. You know the people I'm talking about, don't deny it :)

What really frustrated me was that Cassie was hemming and hawing about what to do about Ralph and if she should continue the long distance relationship. I just wanted to strangle her! I've been in a long distance relationship for the better part of six years (granted, we're in the same province and not in different countries) and they're hard work but if you actually care about the person you will make the distance work. You don't slowly pull away from them! (Wo)man up and face the issues and you'll all live happily ever after. Phew. Sorry for the rant!

The most touching part of the whole story occurred between Cassie and her three year old niece, Aisling. Again, I don't want to give much away so I apologize for what seems like a half explanation. As a three year old girl, Aisling is completely obsessed with princesses and fairy tales (one part of the clever play on the title, in my opinion) and can't quite understand romantic love. When she sees a picture of Cassie and Ralph she asks who he is. Distraught and stumped for an answer, Cassie finally figures out the best way to describe it to Aisling, and herself: "prince." Because of this discussion with Aisling and her asking Cassie (the princess) has been put to sleep (like Snow White), Cassie finally realizes what she's done and what she needs to do to fix it. It's a sweet analogy made even sweeter by the fact that Cassie is helped by an adorable toddler.

Finally, I finish this incredibly long post (sorry!) with an excellent quote. I think I like it mostly because of my Scottish heritage, but I think it's a great insight.

When people heard I was going to Scotland, they looked at me strangely and made noises about whiskey or golf or sheep. A few said something about the Loch Ness monster or kilts or bagpipes. That was it. People knew nothing about the country, and now, standing on that ferry, I wondered if the Scots didn't want it that way. 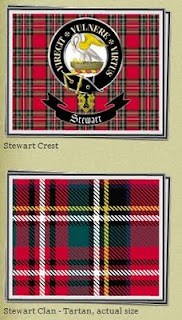 Thanks again to Samantha and Nancy Volkers for making this blog tour happen. I really enjoyed this book and appreciate this opportunity. I would definitely recommend it to anyone who loves a sweet but realistic romance and/or anything to do with Scotland. I'm really looking forward to the sequel!
On the left you'll see my family tartan. I had to share! :)

One final thing: Please join Nancy Volkers on May 10th at 7 pm CST for her own Twitter Party hosted by CLP Blog Tours. Ask Nancy your questions on her books, writing, or more by using the hashtag #CLPNancy.
Posted by Books Etc. at 9:31 AM