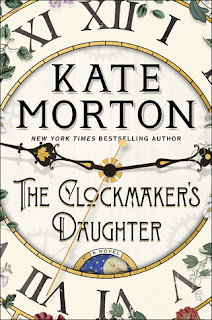 Kate Morton is a wonderful storyteller. She can take two (or more) time periods and characters within them and weave an incredible story. The Clockmaker's Daughter showcased her talents once again. But...I didn't completely fall in love with it as I had hoped to. It's a great novel, don't get me wrong, but I think I expected more.


My real name, no one remembers.
The truth about that summer, no one else knows.
In the summer of 1862, a group of young artists led by the passionate and talented Edward Radcliffe descends upon Birchwood Manor on the banks of the Upper Thames. Their plan: to spend a secluded summer month in a haze of inspiration and creativity. But by the time their stay is over, one woman has been shot dead while another has disappeared; a priceless heirloom is missing, and Edward Radcliffe’s life is in ruins.
Over one hundred and fifty years later, Elodie Winslow, a young archivist in London, uncovers a leather satchel containing two seemingly unrelated items: a sepia photograph of an arresting-looking woman in Victorian clothing, and an artist’s sketchbook containing a drawing of a twin-gabled house on the bend of a river.
Why does Birchwood Manor feel so familiar to Elodie? And who is the beautiful woman in the photograph? Will she ever give up her secrets?
Told by multiple voices across time, The Clockmaker’s Daughter is a story of murder, mystery, and thievery, of art, love, and loss. And flowing through its pages like a river is the voice of a woman who stands outside time, whose name has been forgotten by history, but who has watched it all unfold: Birdie Bell, the clockmaker’s daughter.

I can't quite put my finger on what it was about this novel that prevented me from loving it. It might have been the number of points of view (there are so many that I honestly couldn't tell you all of them). Or it could have been that Part One only had two POVs and switching to others in the following parts made me miss Elodie. She played such a huge part in Part One and barely showed up in the whole rest of the book.

I also wasn't a huge fan of how the book ended. I was reading along and knew it would be done soon because I could tell things were being wrapped up and all the little clues and hints were coming together into an almost satisfying conclusion. Then I realized I only had about 35 pages left of the book. How could it all come together in a great ending in only 35 pages? Turns out it couldn't. Not totally. That being said, there is resolution. And we, as the reader, do know the full story (and I do kind of appreciate Morton assumes intelligence of the reader and allows us to make some final connections). I think I just wanted (needed) to see all the characters finally realizing the full story too. (Wow, it's hard to write about the final pages of a novel without giving anything away.)

Even if I wished the ending had played out a bit differently for the characters, I was reminded how great Morton is at bringing seemingly unconnected threads together to form a full picture. I never know exactly how things are going to be connected but I trust that Morton has a wonderful story in store for me. There's nothing better than exclaiming "Ohhhhh!" as you realize how something that seemed insignificant earlier on was actually the key all along.

The setting of this novel was absolutely magical. It's no wonder Elodie, as her mother before her, was entranced by the fairy story and the house in the country. I could easily picture the house and the landscape as I was reading - and definitely wanted to visit even if the house is likely haunted.

The art nerd in me loved the art history aspect of the story too. It was really neat to read as Morton imagined what it would have been like for artists at the time gallivanting off to make art and how they worried about making pieces to satisfy those wealthy folks who were paying them.

While The Clockmaker's Daughter wasn't as amazing as I wanted it to be, I was still hooked and completely invested in Kate Morton's newest novel. It's mysterious, historical and contemporary, and really well written. It's also a beast at 400+ pages so make sure you have the time to commit once you start because you likely won't want to stop.

*An eARC of this novel was provided by Simon & Schuster Canada via NetGalley in exchange for review consideration. All opinions are honest and my own.*
Posted by Books Etc. at 8:03 AM