Review: A Little Something Different 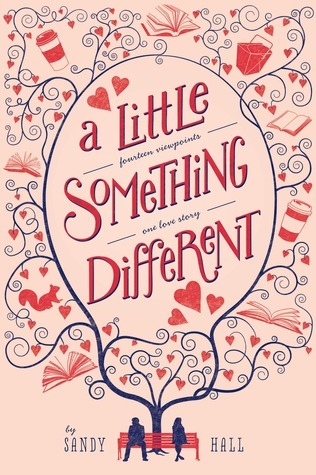 I love when books surprise me. It's been awhile but I was (oh so pleasantly) surprised when I read A Little Something Different by debut novelist Sandy Hall. I thought I'd be in for a sweet contemporary novel but I got a lot more than that.


The creative writing teacher, the delivery guy, the local Starbucks baristas, his best friend, her roommate, and the squirrel in the park all have one thing in common—they believe that Gabe and Lea should get together. Lea and Gabe are in the same creative writing class. They get the same pop culture references, order the same Chinese food, and hang out in the same places. Unfortunately, Lea is reserved, Gabe has issues, and despite their initial mutual crush, it looks like they are never going to work things out. But somehow even when nothing is going on, something is happening between them, and everyone can see it. Their creative writing teacher pushes them together. The baristas at Starbucks watch their relationship like a TV show. Their bus driver tells his wife about them. The waitress at the diner automatically seats them together. Even the squirrel who lives on the college green believes in their relationship.
Surely Gabe and Lea will figure out that they are meant to be together....

On the surface, A Little Something Different seems like every other contemporary story: boy meets girl, they fall for each other, have a conflict, resolve their conflict, and live happily ever after. Sure, the story follows that formula but the way the story is told is what makes this book so awesome. This love story is told from fourteen different viewpoints...except Gabe and Lea's. I know that sounds bizarre. I was skeptical but Hall totally makes it work. It's amazing how well a story can be told simply from others' observations. The synopsis mentions one of my favourite viewpoints: that of the squirrel. Yes, a squirrel in the park tells part of this story! It's a really funny one (the squirrel doesn't understand human but he flicks his tail adorably in the hopes he can get some nuts) but it also allows for some insight into conversations between Lea and Gabe that they wouldn't have in front of others (or at least other humans).

It's not just the way the story is told that makes this novel, well, different. The characters are all unique with interesting back stories. The main characters had really great personalities, too, so it was easy to read about them and read their viewpoints. They're average...but not really. They all have their quirks and differences that make them really interesting to read about. Not boring at all.

Finally, the story was so realistic. I think that's one of the reasons why I love reading contemporary stories so much. I love when the stories are believable and involve something that could happen (or could have happened) in my own life. These are people you could have met or stories you could have heard when you were in university or college. And I love that.

OK, one final note. I think this novel fills a gap in New Adult that a lot of people have wanted filled for awhile. And yes, no matter what tags you may see on Goodreads, this is not Young Adult. The characters are in college and dealing with more real world experiences than high school kids. But there's no major angst or tons of steamy sex scenes (actually, I don't think there are any sex scenes at all) like you may see in most other NA books. Yay! Something different!

A Little Something Different is just awesome. I loved Sandy Hall's debut novel and think so many others would too. It's sweet but not sickeningly so. It's real so it has humour and darkness. It involves a squirrel for crying out loud! How could you not want to read it?

*A copy of this novel was provided by Swoon Reads via Raincoast Books in exchange for review consideration.*
Posted by Books Etc. at 7:01 AM