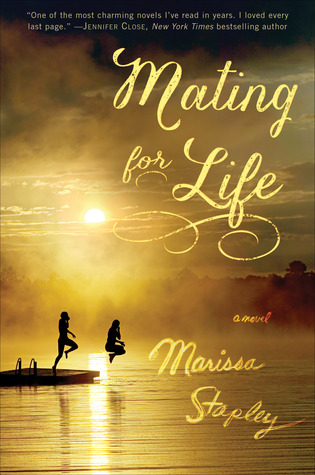 Declaration time! I have found a new Canadian author to love after reading Mating for Life. Marissa Stapley's debut novel was so good and I enjoyed every second I spent reading it.

Former folk singer Helen Sear was a feminist wild child who proudly disdained monogamy, raising three daughters, Liane, Ilsa and Fiona (each by different fathers) largely on her own. Now in her sixties, Helen has fallen in love with a traditional man who desperately wants to marry her—and while she's fearful of losing him, she’s equally afraid she’ll betray everything she's ever stood for if she goes through with it.
Her youngest daughter, Liane, has just ended her own tepid engagement, and is in the heady early days of a relationship with the love of her life. But he has an ex-wife and two daughters—and her new role as “step-something” doesn’t come with an instruction manual. Ilsa, an artist (and classic middle child), has broken away from a bohemian past and is fervently hoping her second marriage will stick. Yet her world feels like it is slowly shrinking, and her painting is suffering as a result—and she realizes she may need to break free again, even if it means disrupting the lives of her two young children. And then there's Fiona, the eldest sister, who has worked tirelessly to make her world pristine. When she discovers her husband has been harboring a huge secret, her own past becomes harder to ignore, and Fiona loses her tenuous grip on happiness. To get it back, she must face some truths that she’d rather keep buried,
and alter the impossibly high expectations she’s been holding everyone – including herself – up to.
Interwoven with these narratives are glimpses of the lives of the women that surround Helen and her daughters: the first wife of Liane's great love; the girlfriend of a man Ilsa is drawn to; the young woman that Fiona's husband has kept a secret. Through these alternating perspectives, and with pitch-perfect honesty and heartwarming humor, Stapley explores sex, marriage, and how the many roles that women play are often at odds with each other. Ultimately a celebration of the redemptive power of love in all its forms, Mating for Life is a stunning, memorable debut.

I had received an ARC so long ago that I had forgotten what the book was really about, let alone that it was written by a Canadian. There are oodles of amazing Canadian authors out there. Some of those authors have written really great women's fiction. What I lack in my reading life (which, let's be honest, is my entire life) is women's fiction set in Canada. It just doesn't often happen. So, I was thrilled when I realized (remembered?) that Mating for Life was set in Muskoka and Toronto. This may not mean much to anyone else but ever since interning at Project Bookmark Canada (and, actually, I think there are some awesome Bookmark opportunities with this one) I've been trying to read more CanLit and it's hard when one of my preferred genres isn't represented. So, thank you, Marissa , for writing just the book I wanted to read.

I really loved the relationships in this novel. Stapley did an amazing job of capturing the nuances of the relationships between a mother and her daughter and between sisters. Because, as much as the marriages and other romantic relationships played a part in this novel, that's really what the story was all about - Helen and her three daughters and they way they interacted and felt about each other. I liked that even if you had a good relationship with your own mother or sister, as I do, you could still identify with Helen, Fiona, Ilsa, and Liane. You knew where they were coming from even if you couldn't understand, for example, how Liane didn't mention her engagement to her sisters, or even to her mother (those would be my first two phone calls should I ever get engaged). The family dynamic was just so real. I don't know how else to really explain why I liked the female relationships in this book...they were just really well done and I felt connected to their story and their lives as I was reading.

If you follow me on Goodreads you may be wondering why, if I'm obsessing over this book so much, I didn't give it five stars (if you don't follow me on Goodreads, I gave this one four, and only because I can't do halfs on the site!). This was purely for a personal reason. It is very common for me to not like a book when it switches perspectives. I like being in the head of one character (sometimes two is ok) but I'm not usually a fan of books that switch between three or more characters. Mating for Life switches between many characters but...I was pretty much ok with it. It still bothered me because I wanted to know what was happening in one character's life but then the chapter would end and it'd be onto someone else's world. It worked, totally, but it made me wish for more time with certain characters. It's also worth it to note that there were usually gaps in time between chapters and you're sort of left scrambling and playing catch up as you try to figure out what had happened with a character since you last heard of them. Again, this really worked with the way the story was being told but it was a little something that I didn't totally love.

A small thing to note but I liked it so I wanted to share: each chapter started with the name of an animal (fox, squirrel, seagull) and a description of their mating behaviour. And I am pretty sure the name of that animal is mentioned within that chapter. I missed a few of them but I definitely caught others. So neat! Here's an example:

I don't know what else I can say about Mating for Life except: read it. Seriously. Marissa Stapley has written an absolutely wonderful novel and I think so many others would love it too. You can bet I'll be pushing this one on almost every reading woman in my life. If you're looking for a well written, emotional, real women's fiction novel (an added bonus if you want a Canadian to have written it), Mating for Life should be your next read. It will be released, appropriately enough, on July 1. Buy it, devour it, and then let me know what you thought of it!

*I received an ARC of this novel from the publisher, Simon & Schuster Canada, in exchange for an honest review.*
Posted by Books Etc. at 6:38 AM