Review: Catch of the Day 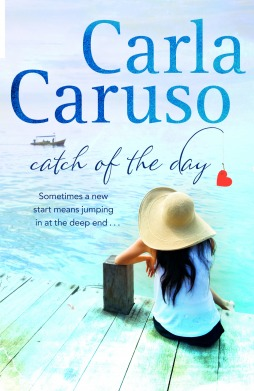 Catch of The Day by Carla Caruso was a sweet read. I didn't love it but I didn't dislike it. I did, however, love that it was set in Australia!


After a regrettable incident at the office Christmas party, up-and-coming fashion editor, Winnie Cherry, is banished to coastal South Australia to set up a beach lifestyle magazine – 300km from nowhere.
Her friends joke that she'll marry a rich cray fisherman and stay there for good, but Winnie has other ideas. Determined to get back to Sydney within two months, she gets to work and starts counting down the days. Until she meets handsome freelance photographer Alex Bass, and sparks begin to fly.
As Winnie is increasingly drawn into the close-knit local community, she starts to question whether city life is really what she wants. That is, until Alex drops a bombshell that casts dark storm clouds over all her coastal dreams…

This was a really middle of the road book for me. I didn't fall in love with the characters (or really even fall in like with them) but I still wanted to know what would happen to them at the end of the novel. I knew there were going to be major issues coming up (the foreshadowing wasn't very well done and I figured out the basics of Alex's secret) and I wondered how the characters would deal with them. I rooted for them as I wanted to see everyone have a happily ever after ending.

This novel had a Pride and Prejudice feel to it. When Winnie and Alex first meet they instantly dislike each other based on a split second judgement. I'm glad they eventually got to know each other and realized that the other had more going on with them than what was on the surface. That being said...it was kind of hard to believe Winnie's change in attitude over the course of the novel. She wanted absolutely nothing to do with the town and her city girl persona seemed so ingrained in her that it was a touch harder than it should have been to see her small town girl personality come out and shine.

My favourite part of the whole book was the setting. I don't often come across books that are set in Australia. In fact, I can't remember the last book I read that was set there, let alone written by an Australian author. Not only was the setting lovely but the language was authentic too. Caruso used a lot of Australian terms (including ute...which I am only just now looking up because I had no idea what the hell kind of transportation device it was...ha! Short form for 'utility vehicle'. Learn something new every day.) and, while I was lost with some of them (obviously), I was still glad they were included.

I also really like the look of the cover (other than the fact that the author's name is taking up half the cover...hate that). The blues are so pretty and the woman sitting on the dock could totally be Winnie (except for the hair colour. She was described as a strawberry blonde...as well as auburn and dusty blonde...). I also love that pop of red with the heart dangling on the line off the 'd'.

Overall, Catch of the Day was a fun read. Carla Caruso has written a sweet chick lit novel that I think lots of others would enjoy, even if I didn't absolutely love it.

*A copy of this novel was provided by the publisher via Netgalley in exchange for an honest review.*
Posted by Books Etc. at 7:17 AM