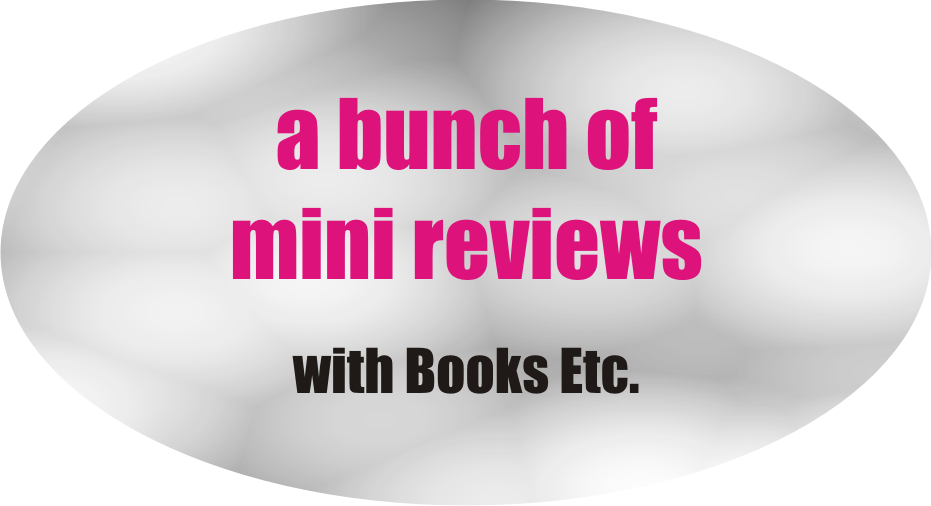 This edition of mini reviews is a mix of my own book (one) and library books (two). I'm still trying to use my library as much as possible even though there are some books I want to own myself. It's also a good way to break out of my comfort zone as it allows me to get some of the YA I've been missing out on. Without further ado, here is my seventh installment of mini reviews!

Before every Ontario Blogger Meet-Up, a massive file is started with lists of books bloggers have to give away or trade. I always peruse the list but I don't have much to offer nor do many books appeal to me because the vast majority of titles are YA. This year though, I saw that Wendy had Dash and Lily's Book of Dares up for grabs and she was willing to give it to me. Yay! I'm so glad she did because it was such a cute and enjoyable read!
I was hooked on this story as soon as I read the first few lines:


Imagine this:
You're in your favorite bookstore, scanning the shelves. You get to the section where a favorite author's books reside, and there, nestled in comfortably between the incredibly familiar spines, sits a red notebook.
What do you do?The choice, I think, is obvious:
You take down the read notebook and open it.
And then you do whatever it tells you to do. (page 1)

Doesn't that intrigue you? I loved that Dash and Lily met because of a scavenger hunt Lily thought up. I totally wanted to take part! I think the hunt exposed more of themselves and their personalities than Lily had intended but it was really great to read along as they learned more about each other and, oh so slowly, fell for each other.
I don't think this is a book that everyone will love though - and I think it's because of the characters. This is probably going to sound harsh/weird/judgmental but bear with me! This book was published in 2010, before the whole hipster scene became a popular thing. I mention this because Dash and Lily are total hipsters in training and that is going to rub a lot of people the wrong way (like my sister, for instance. I think she'd enjoy the story but she would have really disliked the characters, especially Dash). I was fine with it because these types of characters aren't often the focus of novels. I love Sarah Dessen and everything (fave author ever) but her main characters all have similar characteristics. Dash and Lily broke the average character mold and that was really enjoyable to read.
I liked that there was a touch of Christmas cheer (or anti-cheer in Dash's case) in this novel. Because it was a short read, it made it a perfect book for me to read over Christmas. I started it Christmas Eve and finished it in the wee hours of Boxing Day and it was delightful.
If you're looking for a different sort of contemporary YA read, check out Dash and Lily's Book of Dares. It was cute and a lot of fun!

I've been reading Evanovich's Stephanie Plum series for some time now - probably about ten years. Which is half the time the books have been around. Yes, my friends, One for the Money was released a whopping twenty years ago in 1994. I've been saying for awhile that I just kind of wished this series would end. I'm not loving it like I used to and it's gone on for so long. To be blunt...I'm sure the only reason this series is still being written and published is because it's making money. And that bugs me because there are so many other (better) novels out there that aren't getting the time of day because books like these are front and centre at the store. But that's an issue for another day...
Basically, I didn't love Takedown Twenty. It had the same humour and hijinks you'll always find in an Evanovich novel, particularly her Stephanie Plum series, and I found that kind of boring. My favourite part of the book had to do with the giraffe that was running around Trenton. I'm sure I would have found this amusing even if giraffes weren't one of my favourite animals but because they are, I found myself looking forward to every scene featuring Kevin (Lula decided the giraffe looked like a Kevin...she became quite attached to him).
I've decided that I will not read another Stephanie Plum book until I know it's the last one (so someone let me know, K?). You can't fault me for that...I need to know who she finally chooses! Will it be Morelli or Ranger? Until then, I'll pass on Plum's adventures because there are other books I'd rather spend my time on. I know tons of people will read this and enjoy it and that's totally fine. I am not one to judge what others read, trust me. I'm just done with Stephanie until Evanovich is.

Now this should have been my first read of 2014. I could not put Ten Tiny Breaths down. I was hooked! Tucker created a really addictive story and interesting characters in the first of this series.
I did have a couple of problems with it and that's why I didn't give it five stars. It looks like I'm joining others who are not a fan of instalove. I haven't read a ton of books that are like this but as much as I know instant attraction can exist (I'm looking at you, lust), it was sort of hard to get over how quickly Kacey and Trent fell for each other. Another thing that kind of bugged me had to do with the big revelation that I saw coming and you probably will too but I can't say much more about it because I don't want to spoil anything. I just couldn't really see how Kacey could forgive such a huge lie. Everything else I can understand but the lying to her was hard to take.
I did appreciate that there were some serious issues addressed in this book and it wasn't all about the relationship. Kacey has some major problems to sort out thanks to the car accident she was in that killed her parents, her best friend, and her boyfriend. I think Tucker did a good job of showing how PTSD can really affect a person and how different people react to it in different ways.
I also like that the cover doesn't look like your typical New Adult cover (which tend to look like romance covers but with models who are in their twenties). Kudos to whoever approved that!
Even though I had a few issues, I really loved this book. I'll eventually read the next two books in the series, One Tiny Lie and Four Seconds to Lose, but I think I might wait a little while because they feature different characters and I want to stay with just Kacey and Trent for a little while longer.
Posted by Books Etc. at 6:42 AM