Taking It Off the Shelf: The Devil Wears Prada 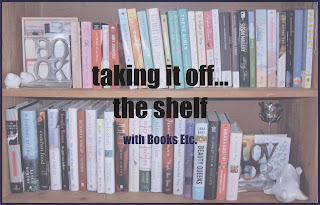 For this month's Taking It Off...the Shelf review, I decided to go with an iconic chick lit novel: The Devil Wears Prada. I've read author Lauren Weisberger's novels before, and enjoyed them, but I had not yet read her debut novel - even though I had seen, and loved, the movie adaptation starring Anne Hathaway and Meryl Streep. I picked this book for the feature because: 1. It's been around for awhile (ten years!) 2. I want to read the sequel. 3. It has been sitting on my shelf for a couple of years (two or three, perhaps.) Last week I finally read it! Warning: this post may be a little more spoilery than usual because I figure anyone reading this post has at least watched the movie. Also, I'm not providing the synopsis (though you can read it here). 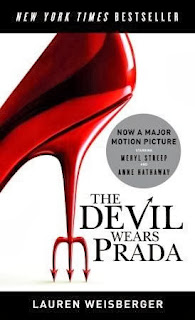 I don't often read a book after watching the movie. In fact, I can only think of two instances where this has happened over the past several years. Once with The Nanny Diaries (I thought the movie was cute after randomly finding it on TV one day and decided to read the book since there was a sequel coming out...I enjoyed all three) and now, with The Devil Wears Prada. I'm a book lover (duh) and I like being able to have my own images in my head before seeing what Hollywood thought of the story. I also like having all the information since adaptations (have to) cut out a lot of details.

The Devil Wears Prada was originally published in 2003 and I missed the boat on it as I was still in high school - not quite the target demographic, not yet anyway. Fast forward three years and the movie is released - starring one of my favourite actresses. I watched it, loved it, bought it. The years passed and I still didn't read the novel. My mom even gave me a copy of it. Then news broke of the sequel, Revenge Wears Prada, and I knew I would have to finally read the first book. I was worried because I liked the movie so much and I hadn't really heard amazing things abut the novel. I was only sort of liking the book for about three quarters of the way through but then it picked up and I ended up really enjoying it.

I think my problem has nothing to do with the story itself and almost everything to do with the fact that I already basically knew what would happen because of the movie. There were a few differences between the book and the movie in the beginning but not many. It was slow going as I was reading about Andy getting used to Runway, the Clackers, and her evil boss, Miranda. But once things started moving (just before Andy has to go to Paris, I think), I couldn't turn the pages fast enough. This was really only the last quarter of the book but it was enough to bump up my overall opinion of the novel.

I want to highlight some differences between the book and movie, for those who may have only seen the film. Some are minor, some are not:


I'm glad I finally gave the book a chance. The Devil Wears Prada was enjoyable and had a good story. I tried really hard not to let the movie alter what I thought but I know it affected my judgement, especially at the beginning. One thing this did teach me is that I'm definitely a read-the-book-before-the-movie kind of girl. I can't wait to read Revenge Wears Prada!

So what's up next for Off the Shelf? I think I'll probably read Comfort Food by Kate Jacobs. I think it's fitting since October is Thanksgiving in Canada and that means lots of comfort food!
Posted by Books Etc. at 7:44 AM