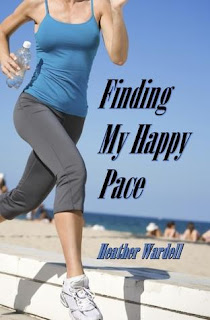 I've mentioned several times on the blog that I'm a huge fan of Heather Wardell. I've loved every single one of her books and Finding My Happy Pace was no exception. I've been trying to catch up on her novels but she's just such a fast writer and I have a bazillion other books to read so I'm still behind. I've also gotten myself out of order! She has a Toronto Series that's not really a true series but some of her previous characters appear or are mentioned in subsequent books. Since I've already read the next book in the series, I'm now only behind by three books. Not bad!

Here's the synopsis of Finding My Happy Pace:

If thirty-year-old Megan were any more of a doormat, she'd have footprints on her back. She helps anyone and everyone, no matter the cost to herself, and she's always been that way. Even the thought of withholding her assistance makes her feel sick. Worse, it makes her feel like she's a bad person, selfish and unkind. She takes up running purely to avoid gaining weight, but as she trains with her cute but heartbroken coach Andrew she becomes more able to do things she'd never thought she could, both physically and emotionally. The day before she runs her first marathon, though, her best friend's demands result in the biggest challenge yet to her developing assertiveness and Megan must decide: cave in as she always has before or stick to her new-found 'happy pace' in running and life.

Usually I give Heather's books a five star rating on Goodreads because I adore them so much. This time, though, I couldn't quite justify it. I loved the story but I hated how much of a doormat Megan was. Because of that annoyance I couldn't quite love it as much as I'd like. It was tough because I really did like Megan and she's a great person and character but reading about how she constantly gave into her so-called BFF and her mother was frustrating. Oh, and speaking of her mother...the family dynamics in this one drove me up the wall. Though it's a testament to Heather's writing that I felt as frustrated as I did. Sure, I was constantly yelling at Megan to stand up for herself but I could also see exactly why it was so difficult.

I'm so happy that Andrew featured prominently in this novel. He was in Planning to Live (funnily enough, the only other book of Heather's that I gave four stars to. You can read my review here) and I always wondered what he got up to afterwards. It was great to see that he was trying to move on with his life and was open to, well, opening up to someone else. It's hard to say too much without giving away the ending of Planning to Live! He's a great guy, though, and I'm really happy he and Megan were able to connect.

I really liked the marathon/running aspect of this novel. I always think that Heather has really interesting and unique ideas and activities for her main characters. Training for a marathon isn't a very unique thing, you're right, but I don't think I've personally read any novels about it before. It was interesting and made me think about my running obsessed friend, Heidi. We all tease her but I'm also so incredibly proud of her for being so dedicated and running so many races. This line made me think of her and made me giggle: 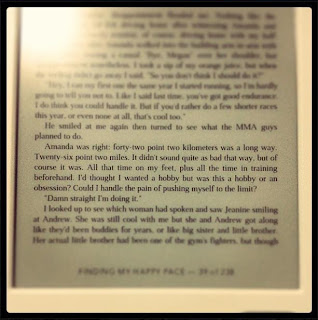 Once again, Heather Wardell delivers a winner with Finding My Happy Pace. It's not my favourite of hers but I think everyone would enjoy it. I can't wait to move onto her next one! Hopefully I'll be all caught up by the end of the year!