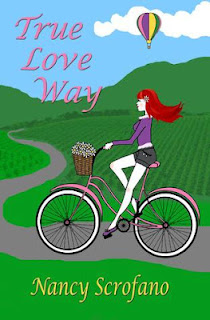 Welcome to a stop on the True Love Way tour! Nancy Scrofano's debut novel was a fun read and while it won't feature on my top ten list, I'm still really glad I got the chance to read it.

Here's the synopsis for this novel:


Marlo Spencer relishes all things retro. Old TV shows, classic movies, and even the collectible lunch boxes to go with them. In fact, she’s quite cozy in her Malibu apartment, surrounded by her treasured knick-knacks and vintage memorabilia. It’s her best friend, Nik, who doesn’t get her fascination with all that “old junk,” as he calls it. He especially doesn’t understand why she’s so keen to get back to their hometown of Napa when her high school sweetheart, Josh, suddenly returns after twelve years in Paris and nary a single phone call, eager to reunite with her. So, when Marlo heads up north to wine country to rekindle her relationship with Josh, Nik tags along, claiming he was already planning to visit his sister, Savannah, Marlo’s gal pal. Once they reach Napa, however, dreams of a blissful reunion are shattered as old secrets and past betrayals are revealed, leaving an unsuspecting Marlo to pick up the pieces. Can she forgive and forget, or will true love find a different path to her heart?

Sometimes I really enjoy friendship turned relationship stories and sometimes I get frustrated because the characters in question are obviously blind to the attraction between them. Happily, True Love Way leaned towards the former. I know the synopsis doesn't mention this part of the story so I'm really hoping I don't give too much away (please forgive me if I do!). I figured Nik secretly had a thing for Marlo but I could tell that she had absolutely no clue. This provided enough drama without being overwhelming and Scrofano had enough plot twists to leave me unsure of how the story would wrap up.

At first I wondered if Marlo had completely lost her mind. Her first love is suddenly calling her up and asking to see her again after twelve years. She immediately wants to see him and seems to think that they can pick things up again where they left off. One teensy, tiny problem - they last spoke to each other a dozen years ago!! Marlo is so convinced that things will work out with her and Josh that she's completely blind to several other important matters. The aforementioned feelings Nik has for her being one of them. Even though I thought she needed to think things through a little bit more, I know I would have gone to see Josh if I was in her shoes. I may not have assumed that we would get married and have lots of babies and that everything would be a-ok but I would definitely want to see what he was up to and what sort of feelings were still lingering.

I loved the family aspect to this novel. I'm not sure if it was Scrofano's intention but the importance of family is incredibly prominent in this book. Marlo is close to her parents even though she lives a few hours away. She and Nik regularly visit her Aunt Margaret, which is so sweet. (By the way, her aunt is a fabulous character. You will love her as much as I did. I promise.) Then there's Marlo's other family - Savannah, her daughter, and Nik - which is just as strong as her blood relations. It was nice to read about these strong relationships. Each character had multiple people who showed that they would stand by them, no matter what, even when the world seems to be crashing down around them. It's the kind of family that almost everyone would wish for.

Marlo and Savannah have such a strong friendship that nothing can break it. Seriously. This book is proof of that. I would like to say I would have been as mature as Marlo in the situation they find themselves in but I don't know if I could do it. I was actually incredibly upset with Savannah and it took me much longer than Marlo to forgive her. I am glad that things worked out for the best for everyone involved, even though I do foresee some awkward moments for the group in the future. And yes, I know that's super vague but I'm referring to a very important plot twist here so I'm not giving anything else away :)

I happened upon the synopsis of this novel well before I was asked to participate in this blog tour. I immediately told one of my best friends about it because I thought she would really enjoy it. She's an old soul and loves vintage things, just like Marlo. Even though I didn't love this book I still think my friend, and other chick lit lovers, would enjoy it. Sometimes a book doesn't totally click due to a personality thing and I think True Love Way was one of those books for me. So don't let any of my less than positive thoughts influence you too much. I still think readers should give Nancy Scrofano's novel a shot. I'll definitely be keeping an eye on her and will very likely read whatever she comes out with next!

Thank you to Lucie Simone at Simon and Fig and Nancy Scrofano for the review copy for this tour!

Check back tomorrow when Nancy stops by Books Etc. with a guest post.