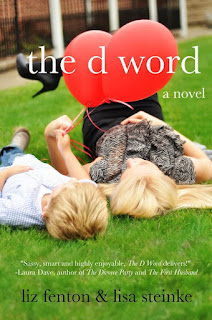 I am going to start off this review with a simple statement:

Of course, if you're a regular reader of Books Etc. you'll already know that. And, if you took a look at the title of this post you'll realize that I read The D Word by Liz Fenton and Lisa Steinke for a chick lit challenge (hosted by the amazing Chick Lit Plus).

One of the first sites I found when I first fell into this wonderful world of book blogs a few years ago was Chick Lit is not Dead. Many of you will know that site as well (and if you don't, get your butt over there and check it out!) Liz and Lisa have all sorts of good stuff on their site - author interviews, reviews, giveaways. Not only do they run a rockin' website but, as it turns out, they're pretty stellar authors themselves. I really enjoyed reading their novel The D Word.

Want to know what this great book's all about? Here's the synopsis:

Jordan Daniels and Elle Ryan thought their lives would become less complicated when they walked away from their respective relationships one year ago. But instead, they find themselves vying for a relationship with the same divorced man.
As a spiritual counselor, newly single mother Jordan Daniels makes her living predicting other people’s futures. If only she could foresee her own. A year after filing for divorce from her husband, Kevin, he seems to be the one moving on effortlessly, while Jordan still can't bring herself to fill his old underwear drawer. But it’s not until Jordan’s polar opposite, Elle steals Kevin’s heart, that Jordan becomes convinced she’ll be replaced both as a wife and a mother to her five-year-old son, Max.
When Elle met Kevin, the last thing she wanted was another relationship. Especially not with a man with baggage-she already had enough of her own. She left her fiancé, Chase right before their wedding to avoid the imminent D word, something she’s convinced runs in her family like a disease. But a year later, she’s no closer to becoming less skeptical about marriage. And despite her attachment to Kevin and his son, when Elle sees just how far Jordan’s willing to go to win Kevin back, Elle starts to question if she should have left Chase in the first place.
In The D Word you’ll walk in the shoes of Jordan and Elle as they discover that sometimes you’re not that different from the person who makes you feel the most insecure.

I was expecting a good book but I found myself a great one. I wasn't sure how I was going to feel about the whole divorce thing but it ended up being a non-issue. You know when there are seemingly huge roadblocks thrown in the way of characters and you can tell they're just put there by the author to have some conflict and they really don't work with the story? Well, that doesn't happen with this novel. Jordan and Kevin's divorce added all the conflict needed for the novel which meant that there weren't any crazy antics created solely to amp up the tension.

I was hoping for a particular conclusion for pretty much the entire novel but I ended up having an ah-ha moment at the same time as Jordan and Elle. I knew, as they did, that things were going to turn out differently. And I was more than ok with that, just as they were. I found that interesting because I kept thinking about the possibility of another outcome and I didn't think I was going to like it. Fenton and Steinke managed to create a conclusion that totally satisfied me and I applaud them for that.

The multiple perspectives was a smart idea for this book. I loved being able to get into the minds of the two women. I also liked that every once and awhile we got an inside look at some of the other characters as well - if I remember correctly, that included Elle's mom, and Kevin, to name two. This was helpful because it allowed me to be unbiased and get both sides of the story. All of this helped me love Elle and Jordan even more. I was really invested in both of their lives and stories and loving a character is almost always necessary for me to love a novel.

I really liked reading The D Word and am really excited to get to the other novel written by these lovely ladies, I'll Have Who She's Having. It would be a safe bet to expect a review of that one later on this year for the challenge! Take note, fellow chick lit lovers. You should definitely add this book to your to be read list!