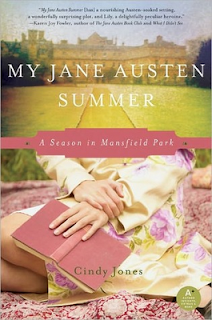 Ladies and gentlemen, I have completed the Vacation Reads Challenge! *curtsies* I honestly didn't think I would be able to get it done - six books in three months and that was on top of many blog tour reviews and everything else that happens in the summer. But I did it! The sixth and final book I chose for this review was My Jane Austen Summer by Cindy Jones.

I'm switching things up a little bit with the synopsis - this one comes from Indigo (because the one on Goodreads isn't really the synopsis, it's a review from Publishers Weekly. Not helpful):


Lily has squeezed herself into undersized relationships all her life, hoping one might grow as large as those found in the Jane Austen novels she loves. But lately her world is running out of places for her to fit. So when her bookish friend invites her to spend the summer at a Jane Austen literary festival in England, she jumps at the chance to reinvent herself.
There, among the rich, promising world of Mansfield Park​ reenactments, Lily finds people whose longing to live in a novel equals her own. But real-life problems have a way of following you wherever you go, and Lily's accompany her to England. Unless she can change her ways, she could face the fate of so many of Miss Austen's characters, destined to repeat the same mistakes over and over again.
My Jane Austen Summer explores how we fall in love, how we come to know ourselves better, and how it might be possible to change and be happier in the real world.


I wanted to love this book. I really did. While I still haven't read Mansfield Park or Northanger Abbey, I still consider myself an Austen fan. I have all six of her novels, several other novels that revolve around some sort of Austen plot (like Confessions of a Jane Austen Addict), and a biography. I also have several movie adaptations and Austen-esque films (like The Jane Austen Book Club). I even wrote an essay on Jane Austen adaptations for a film class I took in fourth year university! (Yes, I had some amazing classes). So, long story short, I wanted to like this book because it promised me a world where Austen was queen. And she was, don't get me wrong, but something just didn't work for me in this novel.

Part of me wonders if the reason I didn't love this novel was because I haven't yet read Mansfield Park. From what I understood, My Jane Austen Summer drew from that particular Austen novel and the criticisms surrounding it. Not to mention the fact that Mansfield Park is the novel the characters are adapting into a play for the festival. I'm going to give this novel the benefit of the doubt and assume that I would have gotten more out of it had I had already read Mansfield Park. I think that's fair, don't you? :)

There was a lot going on in this book. There was the literary festival, its uncertain future, the death of Lily's mother, Willis, Vera and Nigel, Bets and her theatrics, Magda and Archie and their affair, and so on. Some things worked well together and the story flowed, such as Lily feeling slightly unhinged, shall we say, because of her mother's death and wanting to find a way to hide from her own life. On the other hand, there were parts of the novel (the storyline with Archie, his wife and children, and his affair with Magda) that didn't need to be as in depth as they were. The flow was a bit off and that may have been something else that stopped me from loving this book.

I loved the idea of this novel - traveling to a literary festival based around a wonderful author. This is the reason I chose this book for the Vacation Reads Challenge - not only because it takes place in England and I desperately want to travel there, but because it would be like living in an Austen novel for a little while. (Through a quick Google search I see that "Jane Austen festival" generates a great deal of options. Note to self: look into these festivals!) It's just such a neat idea to devote an entire event to one author and I think it would be a lot of fun to look into going to such a festival.

Overall, I didn't love this book. I just couldn't. That being said, I think I would still recommend it to other Janeites. I'd likely warn them that I didn't love the book and give a little insight why but I wouldn't let that stop them from reading it. I'm sure others would love this book and I wouldn't want to get in the way of that! Has anyone else read My Jane Austen Summer? What did you think of it? I'd love to hear your thoughts!