Just Finished: "A Discovery of Witches"

I know it's been awhile since I posted but life has been CRAZY! Not to worry though, I am back and do I ever have a great book for you to read. I just finished A Discovery of Witches by Deborah Harkness and it was so incredibly fantastic that I don't think there are enough adjectives to describe how amazing it is. Right now it is definitely the front runner for my favourite book of 2011. 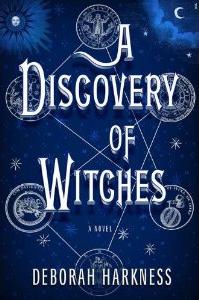 I happened upon a review of this book in an issue on Entertainment Weekly, which you can find here. I'm usually pretty happy with their reviews and both my mom and I decided to check this one out. Boy, oh boy, are we ever glad that we did.

Here's the synopsis from Chapters:


A richly inventive novel about a centuries-old vampire, a spellbound witch, and the mysterious manuscript that draws them together.
Deep in the stacks of Oxford's Bodleian Library, young scholar Diana Bishop unwittingly calls up a bewitched alchemical manuscript in the course of her research. Descended from an old and distinguished line of witches, Diana wants nothing to do with sorcery; so after a furtive glance and a few notes, she banishes the book to the stacks. But her discovery sets a fantastical underworld stirring, and a horde of daemons, witches, and vampires soon descends upon the library. Diana has stumbled upon a coveted treasure lost for centuries-and she is the only creature who can break its spell.
Debut novelist Deborah Harkness has crafted a mesmerizing and addictive read, equal parts history and magic, romance and suspense. Diana is a bold heroine who meets her equal in vampire geneticist Matthew Clairmont, and gradually warms up to him as their alliance deepens into an intimacy that violates age-old taboos. This smart, sophisticated story harks back to the novels of Anne Rice, but it is as contemporary and sensual as the "Twilight" series-with an extra serving of historical realism.

Both this synopsis and the EW article compare this book to the Twilight Saga and I have to agree with them. I hate to do it because there's just this sort of stigma associated with Twilight (and as someone who is slightly older than the target audience and as a former bookseller, I've heard and told all sorts of excuses for reading them) but the comparison really is hard to avoid. I'll put it this way - if you enjoy the idea of Twlight, the vampires, forbidden love, and different types of mythical beings, you'll love A Discovery of Witches. This a grown up version of Meyer's novels with more creatures (witches and daemons instead of werewolves) and an amazing historical aspect. The writing is so incredibly well done and, well, Twilight isn't exactly a literary masterpiece (no matter what those teenyboppers think).

Let me explain why the historical aspect is such a great part of this novel. I wasn't a history major in university and I didn't even take any history classes (and since I saw what my roommates had to deal with, I am sooo glad that I didn't) but I enjoy a good documentary or historical novel every once and awhile. Diana is researching alchemy in an effort to push aside her magical ancestry. She has tenure at Yale so is obviously quite the historian. What makes this kind of neat is that she ends up with a vampire who has personally known some of the greatest minds Diana has been reading about her whole life. I love how amazed Diana gets when she learns Matthew knew someone famous and how she becomes distracted from an original conversation once she finds that out. Can you imagine how cool and completely crazy that would be?

There are a ton of secondary characters but Harkness does a great job of giving just enough background information on each of them so they are really three dimensional characters, just like Diana and Matthew. It is a massive book and each page is used to its fullest with descriptions and explanations cleverly written so as not to give too much away at once.

This novel had just the right amount of magic, suspense, romance, and action all wrapped up in its 592 pages. I was so hooked on this book that I couldn't put it down and I was constantly thinking about it when I wasn't reading it. One of the best things about this novel is that it is the first of a trilogy. Of course, I am going to go crazy waiting for the next book in the All Souls Trilogy (it comes out sometime in 2012) but at least there will be a next one!

Overall, I am completely and utterly in love with this book. I love novels that have a bit of witchcraft (as long as they don't venture into the fantasy category) and this one was just about perfect. It created a world where not only witches live, but also vampires and daemons, all with their own unique powers. The regular stereotypes of each creature are present, but with Harkness wisely puts her own twist on the powers and defining features of each. I highly recommend this book. It is well worth the price in hardcover, but buy the e-book or check it out from the library if you really don't want to spend that much money. I would love to hear from anyone else who has read this one or who knows someone who has read it. Were they as enthralled with is as much as me? Let me know!

Another weekend is done and I happily spent most of it reading this amazing novel. Please please please give it a try as it is just so fantastic. Until next time, happy reading :)
Posted by Books Etc. at 10:22 PM