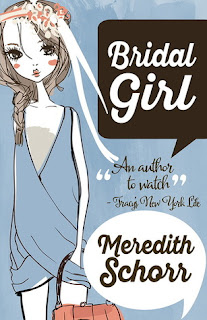 Finally! A new Blogger Girl book from Meredith Schorr! I absolutely adore her series (and, honestly, everything else she writes) and was thrilled when I found out she was publishing another story about Kim Long. Last we left the pint-size chick lit blogger turned author she was engaged to Nicholas and I was excited to see how the wedding planning and actual ceremony would go. That's what happens in Bridal Girl, and oh my word, everything that could go wrong does in a sweet and hilarious chick lit story from one of my favourite authors.

Sassy book blogger-turned-author, Kim Long, thought her life couldn’t get any pinker when she received a two-book publishing deal and a marriage proposal in the same night. The wedding plans are coming together seamlessly, from the catering to the flowers to her much-coveted appointment at the exclusive and world famous Kleinfeld Bridal. Her debut novel is flying off the shelves to celebrated reviews, and her second book is practically writing itself.

If only the above wasn’t a big fat lie.

If only Kim could drown out the conflicting opinions of her overzealous bridal party, most notably, her sister and future sister-in-law, who haven’t stopped bickering since day one.

If only everyone would adore her first book—or she’d take Nicholas’s advice and stop reading reviews—she might not second guess every new word she writes.

If only Nicholas’s past would remain there rather than threaten their future.
The pressure is on, the clock is ticking, and in walks Hannah Marshak.

Will the former “mean girl” lend a helping hand or make things worse? Will Kim ever write “The End” on her sophomore novel? And, will she and Nicholas make it down the aisle to say those two precious words: I do?

We’ll never tell. So, put on your reading glasses, fill your champagne flute/cup of tea and prepare to laugh with (and sometimes at) Kim as she rewrites her happy ending until it’s worthy of five pink champagne flutes.

If you've ever attended or planned a wedding, you know there are about a bazillion things to look after. Which means there are about a bazillion things that could go wrong when planning the wedding. Poor Kim and Nicholas. All those things did go wrong for them. It almost got to be too much but, like any good romantic comedy writer, Schorr found the right balance and kept the story from being too over the top. I always say that weddings lend themselves well to rom-coms because of all the elements to it. Romantic relationships are front and centre, obviously, but there are potential issues with family and friends as well as details with the dress, the food, and the parties. The possibilities are endless for amusing, cringe-worthy, and really sweet moments and I'm so glad Schorr used them all to her advantage.

One of the reasons I love the Blogger Girl series is because Kim is a book blogger like me. She wanted to write a book - and did - so the last two books have been less about the blogging and more about trying to become an author and producing a second novel. While blogging took a backseat, I still loved how much Kim's love for chick lit came through. She started to doubt herself and the genre (the plot of her second novel took a turn that I was really anxious about) and had to find ways to pull herself out of the spiral of defeat she was caught in. It was hard to read just as it would have been hard for Nicholas and Kim's friends to hear and see. There were many times I caught myself thinking that Kim was being so silly and why was she doing such idiotic things? But then I remembered how easy it is to get blinded by your own problems and not realize there's a way out. Even though Kim was going bananas, that meant Schorr had set the scene for some really sweet moments between Kim, Nicholas, and the rest of her friends. It was a reminder that Schorr can write some amazing characters and relationships.

I always find it so incredibly hard to review Schorr's books because I love them all so much. I want to just write READ THE BOOK AND BE HAPPY BECAUSE IT'S SO GOOD but that's not exactly how it works on book blogs! It's also hard with this one because I really don't want to give away any of the surprises Schorr has in store for readers in this book.

Like all of Meredith Schorr's previous novels (and there are several so start reading her backlist if you've never read her before), Bridal Girl is charming and witty with a cast of characters you can't help but fall in love with. I was so glad to spend more time with Kim and am really hoping we'll get even more books in the Blogger Girl series.

*An egalley of this novel was provided by the author via NetGalley in exchange for review consideration. All opinions are honest and my own.*
Books Etc. at 8:19 AM
Share