Review: Say You Still Love Me 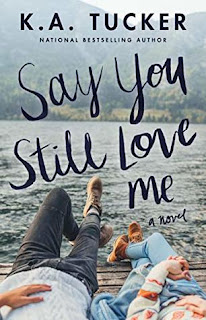 Fact: I will always love whatever K.A. Tucker writes. I've been reading her books for so long now that I can't imagine not falling in love with the characters and world she creates. That might make me a bit biased these days but it's the truth. She is, and always will be, one of my favourite authors (both because of the amazing books she writes and because she's such a lovely person). And because she's a favourite and an auto-read (and usually auto-buy but my wallet usually has more to say about it than I'd like), I knew I'd want to read Say You Still Love Me as soon as I heard about it. So much so that, confession time, I actually had no idea what the book was about before I dove in. And, oh boy, did I ever dive. I didn't want to put it down.


Life is a mixed bag for Piper Calloway.
On the one hand, she’s a twenty-nine-year-old VP at her dad’s multibillion-dollar real estate development firm, and living the high single life with her two best friends in a swanky downtown penthouse. On the other hand, she’s considered a pair of sexy legs in a male-dominated world and constantly has to prove her worth. Plus, she’s stuck seeing her narcissistic ex-fiancé—a fellow VP—on the other side of her glass office wall every day.
Things get exponentially more complicated for Piper when she runs into Kyle Miller—the handsome new security guard at Calloway Group Industries, and coincidentally the first love of her life.
The guy she hasn’t seen or heard from since they were summer camp counsellors together. The guy from the wrong side of the tracks. The guy who apparently doesn’t even remember her name.
Piper may be a high-powered businesswoman now, but she soon realizes that her schoolgirl crush is not only alive but stronger than ever, and crippling her concentration. What’s more, despite Kyle’s distant attitude, she’s convinced their reunion isn’t at all coincidental, and that his feelings for her still run deep. And she’s determined to make him admit to them, no matter the consequences.

Second chance romances are my favourite (yep, I'm a broken record and you'll continue to hear that from me until I can no longer flail about books) so Say You Still Love Me was right up my alley. What I liked about Tucker's approach to the trope was that the relationship began at summer camp (so, hello, perfect for summer) and it featured characters who were from two very different worlds.

The other thing Tucker did with this novel and the second chance trope was tell it in two time periods. There was a chapter in the present ("Now") and then a chapter from 2006 ("Then") when Piper and Kyle were both counsellors at summer camp. Each chapter moved forward in time and, slowly but surely, the story came together and all the little mysteries (what happened to their friend from camp? Why did they break up?) were solved.

Another of my all-time favourite authors is Sarah Dessen. She writes strictly contemporary YA novels (the only kind of YA I'll read these days and even then only from specific authors) and I've been reading them since I was about 15. Her books often take place in the summer because she sees the season as a transformative one where absolutely anything can happen. Once I got thinking about Tucker's latest and all of Dessen's books, I realized something. Say You Still Love Me is what would happen if Dessen's characters grew up and we got to see what they were up to years after a magical, life-changing summer. No wonder I loved it so much.

Three side notes. The first, I love this cover. Just love it. It reminds me of where I grew up and the docks and trees that are found all over the bay. The second is I'm fairly certain Tucker referenced one of her own books in a very sneaky fashion. Piper catches Kyle reading a thriller and its cover features a blurred person with their palm pressed against a pain of glass. Sound familiar? Third, Kyle changes his last name to Stewart, which was his mom's name. I did the same thing when I turned 18. And the name I changed it to? Stewart.

I'm not sure if this book will get bumped to the top of my favourite of Tucker's books - and I can't quite put my finger on why. I thought it was a unique story (yes, there were tropes but Tucker used them well and put her own spin on it) and the characters were interesting (I loved that Piper was smart and kicking ass in the corporate world) and had chemistry. It was still really, really good though and one I'd highly recommend for the second half of your summer (it takes place in part at summer camp, of course you want to read it in the summer).

Say You Still Love Me is yet another wonderful novel from K.A. Tucker. She knows how to write real, angsty, and interesting novels and I always look forward to them. I'm a bit jealous of all of you who haven't read this one yet because you have such a treat to look forward to. I, on the other hand, am already impatiently waiting for what Tucker writes next!

*An ARC of this novel was provided by the publisher, Simon & Schuster Canada, in exchange for review consideration. All opinions are honest and my own.*