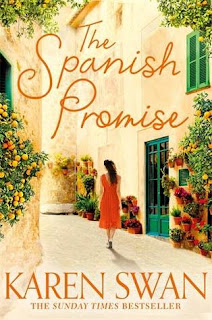 Karen Swan has a lot of novels - and I've read a good number of them. Lately she's had a winter/holiday themed title released near Christmas, as well as a novel released in the spring. The Spanish Promise was this year's spring offering, having been published in March. Even though every single book doesn't completely wow me, I always look forward to reading Swan's novels because the settings are delightful and the stories are interesting. This book was...fine. It wasn't fantastic but it kept my attention enough to want to keep reading until the end.


Charlotte, a wealth counsellor who knows from personal experience the complications that a sudden inheritance can bring, helps her clients navigate the emotional side effects of sudden wealth syndrome. When she is asked by Mateo Mendoza, heir to a huge Spanish estate, to fly to Madrid to help resolve an issue in his father's will, she's confident it will be straightforward. The timing isn't great as Charlotte's due to get married the following week, but once her client signs on the dotted line, Charlotte can return to her life in London and her wedding, and live happily ever after. Marrying Stephen might not fill her with excitement, but she doesn't want to live in the fast lane anymore - safe and predictable is good.
But Carlos Mendoza's final bequest opens up a generation of secrets, and Charlotte finds herself compelled to unravel the mystery. As Charlotte digs deeper, she uncovers the story of a family divided by Spain's Civil War, and of a love affair across the battle lines that ended in tragedy.
And while she is consumed in the drama of the Mendozas, Charlotte's own tragic past catches up with her, threatening to overturn everything in her life she's worked so hard to build.

I think part of my issue was that I was kind of bored by Charlotte. She had something happen in her past that made her shed her rich girl life but I still kind of felt that she was playing at being average, for lack of a better description. She clearly hadn't dealt with her past trauma and was rebelling against her mother and fiance who wished she would just quit her job, get married, and settle into a housewife role like the good little girl they thought she was. I wanted to see more of a spine from Charlotte - especially when she was being challenged by someone from her past - but I never felt like she truly dealt with her past and embraced a life where she didn't rely on her family's funds.

The story takes place during two time periods. While it was very interesting to read the parts on Spain's Civil War, I think the novel suffered from trying to tell two stories. I imagine Swan probably wanted it more intertwined but it just sort of felt like I was reading two different novels. It wasn't until the very end when you could really feel how the stories came together.

My favourite thing about this book - and all of Swan's previous titles - is that it's set somewhere I've never been before. Granted, I haven't been many places, but Swan manages to really paint a picture for me so it feels like I have been there.

It may seem like I didn't like The Spanish Promise but I did. Karen Swan's latest is one to pick up when you want to escape to another country (unless you, you know, live in Spain) and have a mini vacation. I'd file this one under "borrow" and keep in mind you'll get to learn a little bit about the Spanish Civil War along the way.

*An egalley of this novel was provided by the Canadian distributors, Publishers Group Canada. All opinions are honest and my own.*
Posted by Books Etc. at 7:46 AM