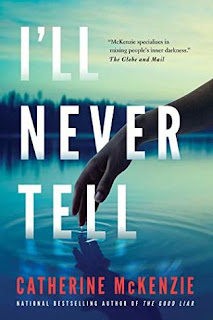 I've been reading Catherine McKenzie's novels for years (eight, as my Goodreads has told me) and I have always marveled at how unique each story is. I eagerly look forward to her next novel as soon as I finish her last. I was especially looking forward to I'll Never Tell after absolutely loving The Good Liar last year (review is here if you missed it). Could her new one live up to her last (which was an instant bestseller, btw)? The short answer is: hell, yes.


What happened to Amanda Holmes?
Twenty years ago, she washed up on shore in a rowboat with a gash to the head after an overnight at Camp Macaw. No one was ever charged with a crime.
Now, the MacAllister children are all grown up. After their parents die suddenly, they return to Camp to read the will and decide what to do with the prime real estate it's sitting on. Ryan, the oldest, wants to sell. Margo, the family's center, hasn't made up her mind. Mary has her own horse farm to run, and believes in leaving well-enough alone. Kate and Liddie—the twins—have opposing views. And Sean Booth, the family groundskeeper, just hopes he still has a home when all is said and done.
But then the will is read and they learn that it's much more complicated than a simple vote. Until they unravel the mystery of what happened to Amanda, they can't move forward. Any one of them could have done it, and all of them are hiding key pieces of the puzzle. Will they work together to solve the mystery, or will their suspicions and secrets finally tear the family apart?

This isn't the first novel that features a dysfunctional family and a surprise in a will, and it won't be the last. But it's definitely going to be one that sticks with me for awhile. The MacAllisters are likeable enough (way more palatable than some families), they're just a bit messed up. And who isn't? It's hard to say if they really deserved to be dealing with their father's bizarre conditions even though it's pretty clear one of them is a murderer.


Speaking of murder and whodunnit - I had no idea. Every time the perspective changed with a new chapter (not as jarring as you might think), I changed my mind. Every sibling had motive and opportunity, though a few of them were immediately ruled out. Or were they? Yep. It's a twisted mystery and I loved it.

There's one thing that's been niggling at me since I finished the novel and it has to do with some choices Pete MacAllister made. I can't really say anything more because it's a hell of a spoiler if I do but his reasoning never made clear (not for the surprise in the will, that part was pretty clear). I guess I'm always just looking for more of an "everything wrapped up in a bow" situation than McKenzie was going for, especially for a character who is dead, but I feel like there's way more to him and his motivations than we got to see.

I loved that this books was set at a summer camp. I never went to overnight camp growing up so I don't have the kinds of memories that the campers at Macaw would but McKenzie does have that experience and, through that background and her great writing, I was able to understand what it was like and why the characters may have acted the way they did.

Also, I always thought the cover was so well suited to this novel - and I was very happy that McKenzie wasn't given an obviously feminine cover - but it wasn't until I inserted it into this review that I realized how perfect (and perfectly creepy) it really is.

I'll Never Tell is an amazing follow up to Catherine McKenzie's success with The Good Liar. It's an intriguing, complex, twisted story that she tells so, so well. I may have started reading her books because they were contemporary, fun, and relateable but I'm so happy with the direction she's taken because she's so good at writing thrillers. Pick this one up for your summer vacation!

*A copy of this novel was provided by the publisher, Simon & Schuster Canada, in exchange for review consideration. All opinions are honest and my own.*
Posted by Books Etc. at 7:44 AM