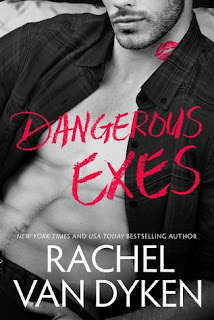 I love a good romance. I won't shame anyone for reading those types of novels because they can be so rewarding and so much fun. Sooo, it's a bit disappointing when a book isn't so fun. I read Rachel Van Dyken's Dirty Exes earlier this year (you can check out my review here in case you missed it) and found it enjoyable enough. I decided to give the sequel, Dangerous Exes, a try - if nothing else to see what Blaire, Isla, Colin, and Jessie were up to since the last book wrapped. It was a fine book but it wasn't anything special, unfortunately.


Isla made one teeny little mistake. Now she and her PI company, Dirty Exes, are being targeted by one seriously angry and furiously sexy ex-quarterback. Jessie freakin’ Beckett. But there’s no way some NFL superhunk is going to take her business away. If only he didn’t make her so hot—and bothered.
Jessie wants payback for a ruined reputation. His plan? Top secret. His hard-to-hide arousal for Isla? Not so much. Especially when they let down their guards and sneak a kiss. Like any juicy scandal, it goes so viral, so fast, that only a good lie can combat the bad press. Mortal enemies in a fling? No way. Um…this is love!
Actually…could it be?
Isla’s not faking it. Jessie can’t. As the game of let’s pretend gets real, Jessie forgets all about revenge. That’s the problem. His plan is already out of his control. Now it could undo everything they’ve been trying to build. Coming clean may be the only thing that can save it.

I had a few issues with the way the first book in the Liars Inc. series was written but it wasn't a deal-breaker. While reading the second, though? It bugged me a bit more. It was sometimes too stream-of-consciousness and choppy which made it look poorly written, when I don't actually think Van Dyken is a bad writer. I'm sure it's really hard to find that balance of getting in the characters' heads and relaying what they're thinking and having a well structured novel. I love first person, and don't mind when points of view alternate as in these books, but something about the way these books are written just didn't work for me.

I also had a really hard time understanding what was happening and who was lying to who. I don't think I really understood why Jessie was trying to destroy Isla's PI business especially when his best friend, Colin, was dating the other partner, Blair, who, coincidentally, was Jessie's ex. It just made Jessie seem like the world's largest asshole and so I struggled with understanding how Isla could fall for him.

A note: I'm pretty sure I'm in the minority with not loving (or even liking) this book as Dangerous Exes has over a 4 star rating on Goodreads. So do with that what you will :)

There's not really a whole lot else I can (or care to) say about Dangerous Exes. Rachel Van Dyken's book was a very "meh" for me and, all in all, will probably be forgotten sooner rather than later. Too bad because I think I could like her stories a lot more than I have so far.

*A copy of this novel was provided by the Canadian distributor, Thomas Allen & Son. All opinions are honest and my own.*
Posted by Books Etc. at 8:05 AM