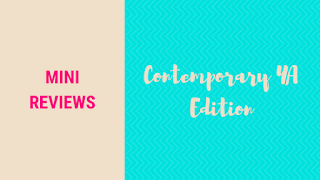 Raise your hand if you have a library card. And raise the other if you use it frequently. *looks around* Good. Glad to see many of you using your library. I, like many voracious readers, don't have the funds to buy all the books I'd like to read. Enter my public library. I use it a lot for book club books and any of the YA titles I want to read but don't get for review. This summer I read two wonderful contemporary YA novels that I really wanted to talk (read: flail) about on the blog.

My YA reading is pretty much restricted to contemporary YA books these days and even then it's only a certain few authors that I make the time for (so many books, so little time). I put Morgan Matson's Save the Date on hold as soon as it was available and was anxiously waiting for it to come in. I honestly didn't even know what the book was about (but you can read the synopsis here) but Matson has become an autoread author for me in recent years. I had the chance to go to a meet and greet before her first ever Canadian tour date where my blogger friend Tiff - from Mostly YA Lit - interviewed her. But...I have a new job and only so much wiggle room on asking for time off plus I'm not super close to where the event was happening. *sobs* 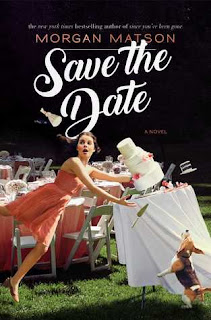 This book was pretty much impossible for me to put down and I had it finished in a weekend. It was smart, funny, and genuine - things I look for in almost every book I read. I was completely sucked into Charlie's life and, as is usual when I read YA books these days, I found myself wanting to play the big sister to Charlie and help her figure out her life. I'm the eldest in real life anyway, plus I'm so much older than the teens I'm reading about now, so it's inevitable that I'll start feeling protective of these girls. Even though I wanted to swoop in and tell her what I thought she should do, I knew she had a great head on her shoulders and she'd figure out on her own what the best path for her would be. That's what being a teenager is all about, isn't it? Making your mistakes, learning from them, and growing as a person.

The Canadians in the crowd will definitely understand me when I say the cartoon Charlie's mom drew totally reminded me of For Better or For Worse, a strip by Lynn Johnston that I was obsessed with growing up (seriously, I still have the book collections). Charlie's mom's strip Grant Central Station, like FBorFW, shows the characters aging in real time. Plus, there were older siblings and a much younger sibling (or siblings) in both, and a dog. I clearly was on the right track because this came up during the event I missed and Tiff, with her amazing recap, mentioned it. LOVE.

Finally, I loved that this book was about Charlie and her family (as well as a little bit about her friends). The boy troubles were totally realistic because, hello, she's 18 and interested in boys so of course they're going to come up in her life. But they weren't the point of the story. She very much was figuring out herself and her place in her family and the world in general. The love story was secondary (but no less welcome).

I also try to make time for really great books I wouldn't necessarily read when bloggers I trust can't stop talking about them. This time it was Ginger (of GReads!) flailing about Stay Sweet by Siobhan Vivian. (Synopsis is here on Goodreads) I wholeheartedly trust Ginger's opinion so on the reserve list it went and I happily dived in when it arrived. And oh - how sweet it was! 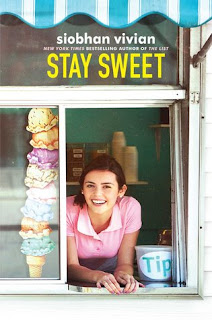 These novels were actually quite similar (which is kind of fun/odd because the two authors are friends). Both stories featured smart, funny, sort of shy girls who had just finished or were finishing high school and were looking forward to their next step - college. Every summer I always find myself thinking of the year I was getting ready to go to university and how much of a big deal that summer was. I had some major changes that year, just like Amelia and Charlie. I finished high school, was finishing my final summer at the library where I had worked all through high school (and wanted to work at since I was little, just like Amelia with the ice cream shop), and I started dating someone new even though he was staying behind for another semester and I was moving 2+ hours away. (Spoiler alert: we're still together 13 years later.) That summer between high school and university/college is just so magical and I really, really love reading stories set during that time - especially when they're so amazing. Stay Sweet was great and I am SO GLAD I made the time to read it.

I'm a big ice cream fan (Revelation: I don't know if I can fully trust anyone who isn't...) but I also try to make sure I only eat really good ice cream. I could totally identify with the popularity of Meade Creamery and found myself constantly comparing it to a local ice cream shop I was introduced to a year or so after moving to the area I'm in now - Avondale Dairy Bar. Not only do they both have the family run business feel but I pretty much only see teenagers working at Avondale and most of them are girls, just like at Meade Creamery. I adored that only girls were allowed to work at the ice cream shop and couldn't get enough of Amelia describing how they all helped each other out and the older girls were like another set of older sisters for the newbies. It was also feminist AF and I loved one scene where Grady says Amelia is being bossy and she totally calls him out on it and tells him he's being rude. He immediately apologizes. (Also - I'm writing this almost a month after reading it so I'm kinda paraphrasing.)

I really loved Amelia - probably because she reminded me a lot of myself at that age. Only she's way more confident than I was and had a better sense of her future than I did. (Hell, than I do now at 31.)

Overall, these two books are MUST. READS. for your summer. Or fall. Or holiday. Just read them. And gift them to all the teens in your life because every reader needs to meet Charlie and Amelia because they are absolutely amazing characters. And suddenly I'm craving ice cream...but what else is new?
Posted by Books Etc. at 8:10 AM