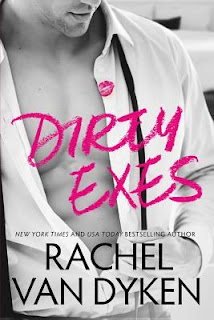 What you see (or read) is what you get with Dirty Exes by Rachel Van Dyken. Which, depending on your mood, could be good or bad. It was great for me because I was in the mood for a romance with some humour and heart and Dirty Exes, the first book in a new series, totally delivered.


Blaire has never quite gotten over Jessie Beckett, the ex–NFL star whose kisses were hot enough to ignite the entire Eastern Seaboard. When he chose work over her, Blaire was left brokenhearted. Why else would she have married a skeezy two-timer, just to divorce him less than a year later?
Now Blaire is getting even by becoming one half of Dirty Exes, a PI firm fully committed to humiliating cheating jerks. If only the new jerk she’s been hired to uncover wasn’t Jessie Beckett himself.
Exposing Jessie isn’t going to be easy, especially when she still daydreams about his sexy smile. Further complicating matters is Colin, Jessie’s best friend. He’s gorgeous, a little bit cunning, and willing to help Blaire get the inside scoop on Jessie—for a price.
Now caught between two men—one totally right and the other totally wrong—Blaire will need to decide just how much she’s willing to risk…and whom she’s willing to risk it for.

Was Dirty Exes the best rom com I've ever read? No. But did it give me exactly what I hoped it would (which was some swoons and some laughs)? Yes, absolutely. I love romance novels because I know just what I'm going to get with the story but I especially love the ones that are really well written and provide a great story line along the way to the Happily Ever After.

The story is told from three perspectives - Blaire, Colin, and Jessie - and each is first person. I liked how that worked because you got a sense of what each character was really thinking and feeling. This was especially useful in this story because there were so many secrets between the three of them that it would have been really hard to figure out Colin and Jessie's motives had the story only been told from Blaire's perspective.

The first person narrative also created a very informal, conversational type of storytelling. Lines and thoughts were sometimes choppy which can be a bit weird to read but if you think of it more as though you're following along with the character's train of thought it usually works. For example, this little excerpt shows how Blaire is working through a revelation about Jessie (it's not a spoiler because you learn these details early on through Jessie's POV):


Vanessa was living with him.
Living. With. Him.
And he was flirting with me. With his wife still under his roof.
My phone buzzed again.
Seriously?
I grabbed it and checked my messages.

You see what I mean? It's odd to see that all written out but it's exactly as you would be saying it either to a friend or inwardly as you worked out the issue.

I had a hard time really getting to know Blaire because she had so many walls up. I couldn't really see how she fell for Jessie the first time and why she was so crushed when he left. I also didn't see any glimpse of the woman who would have run straight into the arms of a "nice guy" who ended up being an ass who also broke her heart. She was angry and bitter and I really needed to see her let those feelings go. She was a complicated character whose layers weren't quite as fleshed out as I would have hoped for.

I really wasn't sure how the Happily Ever After was going to work out. I hadn't reread the synopsis before diving in so I had forgotten that I wasn't supposed to be sure who Blaire would end up with. I was sure it would be Jessie but then I realized she was starting to fall for Colin too but, wait, does she actually still love Jessie more? It was a back and forth that kept me on my toes.

All in all, Dirty Exes was a fun read for me. I liked meeting all the characters Rachel Van Dyken created and I'd definitely like to catch up with some - or all - of them in the next book, Dangerous Exes.

*A copy of this novel was provided by the distributor, Thomas Allen & Son, in exchange for review consideration. All opinions are honest and my own.*
Posted by Books Etc. at 8:04 AM