About two months ago I read Karina Halle's The Swedish Prince (you can read my review here in case you missed it). It was a lovely addition to royal fiction and I enjoyed it. I wasn't sure how I'd feel about the book she was planning next, The Wild Heir, which was going to feature Magnus, the Prince of Norway (not the real prince...all her royals are fictional). Don't tell Prince Viktor but...I loved Magnus and his story so much more. It was really enjoyable - and timely since Royal Wedding coverage was everywhere as I was reading it.

At first glance I probably seem like any good-looking guy in their late twenties. I have an obscene amount of confidence, a tattooed body sculpted by the Nordic gods, and I love the ladies as much as they love me.

If I’m not BASE jumping or car racing, I’m chasing other devious thrills with the woman of the week. And that’s fine if you’re the average single guy.

But I'm not the average single guy.

Now the only way the monarchy can save face is for me to smarten up – publicly. If I don’t, I’ll no longer be heir apparent to the throne. So it’s either I abdicate my future role as King or… I get married.

To a blue-blooded stranger.

Enter Princess Isabella of the tiny country of Liechtenstein.

Quiet, intelligent, and uniquely beautiful, Ella doesn’t like this arrangement any more than I do and she’s not afraid to show it. She says I’m a womanizer, that I don’t take anything seriously, that my ego should be taken down a few pegs, and I think she aims to make me miserable for the rest of my life.

But even as our arranged marriage becomes a war of wit and words, I’m determined to break through Ella’s prim and proper façade to find the wild, sexual and risk-taking woman underneath. I want to uncover the Queen inside her.

The only question is – will she let me?

Like many of Halle's books (actually, I think it might be all of them but can't say for certain), the story is told from two perspectives. In the case of The Wild Heir, readers hear from both Magnus and Ella. I like having both main characters represented because the story always feels so much more in depth and richer for it. I also like that it doesn't always alternate evenly. A chapter may end with Ella but instead of automatically switching back to Magnus, Halle might stay with Ella because her thoughts and part of that story isn't finished yet. Halle knows how to tell her characters' stories so well which is one of the reasons I love her books.

Halle is always very clear that her books are standalones even if they play off each other. I'm a pretty big series purist so I always recommend reading all the previous books before because then you won't be spoiled or missing out on any particular storylines. But this one? Totally can stand on its own. Viktor shows up for one fun weekend plot point but Maggie is really only mentioned in passing. So, if you want a royal marriage, pick this one up, dive in, and don't worry about feeling left out.

I had an idea of Magnus in my head after reading The Swedish Prince and it was not unlike what Ella thought of Magnus before she got to know him. It was a lesson to both of us (and I'm sure many other readers as well) that you should never assume you know what someone is really like, especially when they're in the public eye. I know Ella was happy with the man she got to know over the course of the novel and I was too. Magnus also really grew as a man which was really great to see and I liked that Halle didn't make it too obvious. She never veered away from his true character. I would really like to read another book about Ella and Magnus in part because I'd like to see how Ella grew and evolved after their marriage. And I just really want to read more about them!

The slow burn of their relationship was perfection. The whole arranged marriage thing could have been done so badly but Halle did it well. I loved reading as Ella and Magnus slowly (oh so slowly) got to know each other. Ella seemed like a skittish colt but she was a strong woman who wasn't about to get pushed around by some brutish prince.

The Wild Heir was a delight to read - it was funny, deep, and sexy - three things I always look for in my romances. I'm fairly certain you're going to fall in love with Magnus and Ella once you read their story. So what are you waiting for? Get your own copy and discover Norwegian royalty for yourself!

*An eARC of this novel was provided by Social Butterfly PR in exchange for review consideration. All opinions are honest and my own.*

Meet Karina
Karina Halle is a former travel writer and music journalist and The New York Times, Wall Street Journal and USA Today Bestselling author of The Pact, Love, in English, The Artists Trilogy, Dirty Angels and over 20 other wild and romantic reads. She lives on an island off the coast of British Columbia with her husband and her rescue pup, where she drinks a lot of wine, hikes a lot of trails and devours a lot of books.
Halle is represented by the Root Literary and is both self-published and published by Simon & Schuster and Hachette in North America and in the UK. 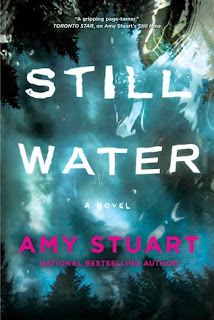 I had heard of Amy Stuart's novel Still Mine when it was released back in 2016 but never did get around to reading it. (So many books, so little time.) But when I heard Still Water was being published I thought I should give it a try. And am I ever glad I did. I didn't want to put this book down and I'm sure you won't either.


How do you find the truth in a town full of secrets?
Clare has to find them.
Sally Proulx and her young boy have mysteriously disappeared in the stormy town of High River. Clare is hired to track them down, hoping against all odds to find them alive. But High River isn’t your typical town. It’s a place where women run to—women who want to escape their past. They run to Helen Haines, a matriarch who offers them safe haven and anonymity. Pretending to be Sally’s long-lost friend, Clare turns up and starts asking questions, but nothing prepares her for the swirl of deception and the depth of the lies.
Did Sally drown? Did her son? Was it an accident, or is their disappearance part of something bigger?
In a town where secrets are crucial to survival, everyone is hiding something. Detectives Somers and Rourke clearly have an ulterior motive beyond solving the case. Malcolm Boon, who hired Clare, knows more about her than he reveals. And Helen is concealing a tragic family history of her own. As the truth surges through High River, Clare must face the very thing she has so desperately been running from, even if it comes at a devastating cost. Compulsively gripping and twisty, Still Water is a deep dive of a thriller that will leave you breathless.

As I hadn't read the first book about Clare, I was especially paying attention to how Stuart would recap (or not) Still Mine. I think she did a great job of giving background information a new reader would need but that I don't think would bore a reader who already knows Clare's history. I definitely think you can dive into Still Water (er, no pun intended) without having read Still Mine but I think you'll have an even richer reading experience if you read both.

I was pretty much addicted to this story. It's really fast paced with all sorts of twists and turns. I found myself thinking of it often when I wasn't reading it and couldn't wait to see how it would all turn out. I really had no idea how Stuart was going to have things end up. I loved that.

There were a lot of secrets in this novel. As I said, I wasn't sure how the story would end because I really wasn't sure who to trust and who was telling even part of a truth. No one was who they seemed which made fitting the puzzle pieces together so difficult. Once I neared the end of the book I realized how easily it all came together which I think is a sign of a great mystery.

Clare was a really interesting character. I had only met her well after she had run away from her husband so I'm not totally sure of what kinds of abuse she really suffered. What I do know is that many people are and were doubting her because of her past history with drugs. It was so frustrating that so many people - including a close friend - had this bias. Almost like they thought that because she did drugs, she deserved what she got.That she wasn't totally lucid and should have been so she could fight back. And then there's the fact that her husband is telling a totally different story. It's terrifying to think that women are in these situations all the time and face so many issues when they try to tell the truth and get help.

But back to Clare. She's a smart woman who has a whole boatload of problems she's never been able to deal with properly. I think in this book she's realizing how she can take control and is sort of facing her demons head on. She still has a lot of work to do so I'm really hoping Stuart is working on another story for Clare. I'm totally invested now.

I'm hoping Still Water is a book we'll see everywhere this summer because it's so good. I was a little bit obsessed with it and Amy Stuart's writing. Pick this one up the next time you're in a bookstore or download it to your e-reader. Seriously. It's a well-told, gripping thriller that I think so many other people will love.

*An Advanced Reader Copy of this novel was sent by the publisher, Simon & Schuster Canada, in exchange for review consideration. All opinions are honest and my own.*
Posted by Books Etc. at 8:04 AM No comments: Links to this post