I've been reading Karina Halle's books for ages now and, lucky for me, she's an author who publishes books really frequently. Due to time and funds, I've skipped buying the last few she's written but once I saw what Wild Card was about I knew I had to have it. Small town? Canadian? Second chance romance? Sign. Me. Up. And guess what? It totally delivered. I loved it!

What would you give up to have a second-chance at a once-in-a-lifetime love?
Wild Card is a STANDALONE SECOND-CHANCE ROMANCE from the NYT bestselling author of The Pact and Before I Ever Met You.
Rough, raw & rugged.
As the man in charge at Ravenswood Ranch, Shane Nelson has never been afraid to get his hands dirty. His sculpted physique isn't the product of a gym, but of years of hard labor under a relentless sun. His straightforward, alpha tendencies come from a man who knows what he wants and goes after it.
And what he wants is Rachel Waters.
He's never stopped wanting her.
They were childhood best friends, then teenage lovers who evolved into soulmates. But on one fateful night, Shane made a grave mistake, breaking both their hearts in the process.
Now, after six years, Rachel is back in the small, wild mountain town of North Ridge, BC.
Ready to face her past.
Ready to face Shane.
Ready to face his dark secret.
But is a second-chance at a one true love in the cards? Or will their wild hearts be broken once again?
WILD CARD is a complete standalone novel and the first book about the Nelson brothers of North Ridge.

First things first, as the synopsis says, Wild Card is the first book in (I assume) a trilogy about three brothers. It's a sort of series in that the books are connected but you don't have to read each book. Not into second chance stories? That's ok. Wait for Maverick's novel. I'm a bit of a series purist though so I'm going to read each in the order they're written.

Halle has an amazing talent of writing romances that are about so much more than the love story. Her characters are so developed and multi-layered. Their stories will grab hold of your heart and not let go. Seriously, I finished this book hours ago (yesterday, by the time this post will be published) and I've barely been able to stop thinking about it.

Rachel has a past that is far from sunshine and roses. She's suffered and that pain really came through the pages. So much so that I found myself close to tears in some points. Heart-wrenching in the best way. (That sounds weird to anyone who isn't a reader but readers will understand!) There were a few flashback sections and I was so glad Rachel had Shane when she was younger. There was so much awareness in that little boy and he made it his mission to protect Rachel and make sure she had the best possible life. Until, of course, his secret causes them both unimaginable pain.

Their love story, though? Swoon. It's hot, it's heavy, it's romantic, it's heartbreaking, it's the stuff of fairy tales. And, best of all, it felt real.

It's rare that these types of stories are placed in Canada so I loved that Halle, Canadian herself, placed the story in BC.

I cannot wait for the next books to be released. I need to know how Rachel and Shane are doing and I'm really looking forward to seeing how Fox and Maverick's love stories end up. If you are looking for a great read that really pulls you in and you will not want to put down, you need to read Wild Card. If you're a fan of Colleen Hoover and KA Tucker, Karina Halle should definitely be on your TBR list.
Posted by Books Etc. at 7:32 AM No comments: Links to this post 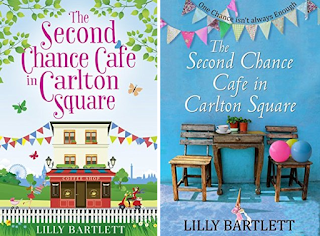 A few months ago, HarperCollins started a campaign asking #WhoIsLilly. Lilly Bartlett was a debut author but she was the pseudonym for another, more established author. I took part in the campaign, tweeting out clues over the course of week or so, until the big reveal was made. Lilly Bartlett, author of the new book, The Big Little Wedding in Carlton Square, is actually Michele Gorman! I've been reading Gorman's books on and off throughout the years so it was so much fun to take part in the campaign. I never did manage to read the first Lilly book but did dive into The Second Chance Cafe in Carlton Square.

Here's the synopsis via Goodreads:

One chance isn't always Enough
Everyone expects great things from Emma Billings, but when her future gets derailed by an unexpected turn of events, she realizes that getting back on track means traveling in a different direction.
She finds it in the closed-down pub on Carlton Square. Summoning every ounce of ingenuity, and with the help of her friends and family, she opens the Second Chance Café. The charity training business is meant to keep vulnerable kids off the streets and (hopefully) away from the Metropolitan Police, and her new employees are full of ideas, enthusiasm ... and trouble. They'll need as much TLC as the customers they’re serving.
This ragtag group of chancers have to make a go of a business they know nothing about, and they do get some expert help from an Italian who's in love with the espresso machine and a professional sandwich whisperer who reads auras, but not everyone is happy to see the café open. Their milk keeps disappearing and someone is canceling the cake orders, but it's when someone commits bloomicide on all their window boxes that Emma realizes things are serious. Can the café survive when NIMBY neighbors and the rival café owner join forces to close them down? Or will Emma’s dreams fall as flat as the cakes they’re serving?

While you don't necessarily have to read the first book about Emma, I would suggest it. I wasn't really confused about her life or anything like that but I wish I had been able to read how she and her now-husband Daniel, met and got married. I also suspect that would have given me even more insight into Emma's character instead of meeting her as she was a mother and trying to fit in opening a business around raising twins.

This novel is definitely a rom-com with more lighthearted laughs and silly scenarios than actual depth, but there is so much heart in this book that the seemingly superficial nature of the story doesn't really matter.

I'm not totally sure why Bartlett chose to start the story in the present, go back in the past, and then work her way forwards to explain the story. It worked just fine but I don't know if I necessarily needed to know (other than from the synopsis) that someone was sabotaging her business before I learned how and why she was opening the cafe.

I did love that Emma was so committed to her trainees. She had two - one teenage boy and one teenage girl. They had had a rough upbringing and at least the girl, Lou, has a record (she'd been caught stealing). Emma's a bit hesitant about the teens but her heart is so big that she really wants to help them succeed. It's equal parts sweet, funny, and frustrating to watch as she trains these kids and tries to give them the tools they'll need to succeed in their future.

The Second Chance Cafe in Carlton Square is a quick and sweet read that's for anyone looking for a fun and lovely story. It'll make you smile and cringe, and probably start hunting for a cafe in your neighbourhood that's just like Emma's. I'm definitely going to be on the lookout for that cafe - and for Lilly Bartlett's next book!

*I received a copy of this novel from the author in exchange for review consideration. All opinions are honest and my own.*
Posted by Books Etc. at 8:39 AM No comments: Links to this post