Review: Lily and the Octopus 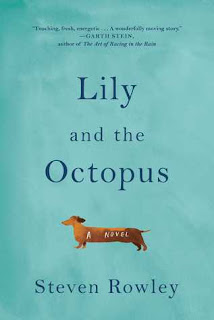 
Combining the emotional depth of The Art of Racing in the Rain with the magical spirit of The Life of Pi, Lily and the Octopus is an epic adventure of the heart.
When you sit down with Lily and the Octopus, you will be taken on an unforgettable ride.
The magic of this novel is in the read, and we don’t want to spoil it by giving away too many details.
We can tell you that this is a story about that special someone: the one you trust, the one you can’t live without.
For Ted Flask, that someone special is his aging companion Lily, who happens to be a dog.
Lily and the Octopus reminds us how it feels to love fiercely, how difficult it can be to let go, and how the fight for those we love is the greatest fight of all.
Remember the last book you told someone they had to read?
Lily and the Octopus is the next one.

I'm going to go against the synopsis and give you a bit more background on the story. Lily has been Ted's dog for many years and one day he realizes there's something growing on her head. Ted decides that that something is an octopus. I think he knows, deep down, that it's a tumor and Lily is therefore very sick. What follows is a story that is sweet and heartbreaking all at once.

So that magic the synopsis alludes to? It took the reader on a bizarre adventure on the high seas and that is when Rowley completely lost me. I love a good magic realism book but when I'm not expecting something like that and when I wasn't as invested with the story to begin with...well...it doesn't help my enjoyment.

I can't pinpoint what, exactly, my issue was with this novel. It wasn't a bad book. It was written well. I just don't think the subject matter resonated with me and I think it needed to for the reader to fully enjoy the novel.

I do have to say that I love the idea of being able to have actual conversations with our pets. And the opening? That Thursdays are for talking about boys Ted and Lily think are cute? Love. (Ted is a Ryan Gosling fan while Lily is Team Ryan Reynolds.)

Lily and the Octopus really was a sweet novel. I think it might resonate more with dog owners. I have a rabbit and I'd be devastated if an "octopus" moved in with us. Many, many other people absolutely adored Steven Rowley's novel so don't just take my (oh so very lukewarm) thoughts on it.

*An ARC of this novel was provided by the publisher, Simon and Schuster Canada, in exchange for review consideration. All opinions are honest and my own.*
Posted by Books Etc. at 9:32 AM

Email ThisBlogThis!Share to TwitterShare to FacebookShare to Pinterest
Labels: dogs, Lily and the Octopus, Steven Rowley