Readalong: Knocked Out by My Nunga-Nungas 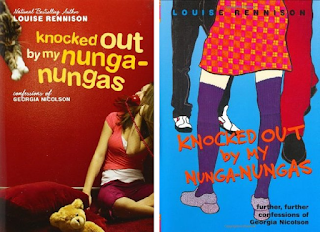 To borrow a phrase from the incomparable Georgia Nicolson, erlack a pongoes! (Seriously, she does say this but I have no idea why.) I apparently forgot how to read calendars and confirm when I'm to have certain books read by. I'm a couple days late posting about Knocked Out by My Nunga-Nungas, the third book in the Georgia Nicolson series by Louise Rennison and the third book in The Paper Trail Diary's Readalong.

Here's the synopsis for the third book:


Georgia Nicolson is now the girlfriend of the Sex God (aka Robbie), and things are wonderful. Except her loony parents are dragging her off to Och Aye land (aka Scotland), and the Sex God's band's chance at a record contract has left her something of a "pop widow."
Then up rears temptation in the form of old flame Dave the Laugh. Is Georgia about to become a shameless vixen?

I've been reading these books really quickly (like...under 2 hours quickly) and I hadn't thought much of that before today. I finished Nunga-Nungas after one lunch break (30 minutes) and one workout (40 minutes on cardio aka reading machines). I'm a fast reader to begin with and these books aren't very long (under 200 pages) but that's still especially quick for a YA novel. I don't read a ton of current YA but I still think the books I do pick up are taking me longer to read and I'm not sure why. Am I reading these ones quicker because I've already read them? (Albeit 10+ years ago.) Or are they just not as deep as new YA books? I'm leaning towards the latter because, honestly, not a ton happened in this book. I'm all for quick, easy, fun reads but I don't think these books would thrill today's YA readers somehow.

Just like with the second book, I had to try really hard to remember that I was once 14 and ridiculous. I was probably unintentionally cruel to my parents and friends. But that doesn't make it easier to read. I struggle with how Georgia treats Jas, her best friend. Take this exchange for example. Jas has just told Georgia something about Tom, Jas' boyfriend:

"I nearly said, 'Who cares.' But you have to be careful with Jas because she can turn nasty if she thinks you are not interested in her." (page 26)

What Jas told her isn't particularly thrilling, I'll give you that, but I feel like a best friend shouldn't respond with "who cares" when you're talking about something of importance to you.

There were a few funny moments in this book (I was actually laughing out loud when on the bike at the gym...which got me a few weird stares). One of my all time favourite lines in the series finally showed up in this book, courtesy of, of course, Dave the Laugh. Instead of goodbye, he says, "I'm away laughing on a fast camel." My friends and I used that saying for ages after we read these books. It pretty much makes zero sense but I still love it.

I will say that I completely understand Georgia's struggle with Robbie aka the Sex God vs Dave the Laugh. Teenage girls (well...many females at any age) tend to be drawn to the popular boys - whether it's a musician like Robbie, the captain of the football team, or maybe the bad boy - even though he's not right. Georgia isn't the first girl to swoon over a good looking boy and want to date him based solely on his looks. She realizes that she acts like a bit of a loon around Robbie sometimes, but not around Dave, but, like most 15 year old girls (er...is she 15 yet? I can't remember), she doesn't realize why that matters. Snippets of maturity and self-realization are evident and it's those snippets that make me want to keep reading.

We have to talk about the whole touching of Georgia's nunga-nungas (aka basoomas aka breasts). Jess (of The Paper Trail Diary) also mentioned it in her review (read it here), and includes the full exchange between Jas and Georgia that had me cringing. Basically, a boy in Scotland (where Georgia was vacationing with her family) randomly fondled Georgia's breast. She didn't ask for it - had barely talked to the boy in question, to be honest - and despite what Jas implies, she isn't putting out any signals that makes it seem like this kind of touching would be welcome. Later in the book, Mark, a boy she dated awhile back who also touched her without her permission, makes a comment about the size of Georgia's breasts in front of his friends. I don't think I would have thought anything of this when I first read this book (likely because I had no basoomas to speak of at 15) but now? Now I feel gross reading it. (Jess used the same word and it's just the best way to describe it.) Unwanted touching and slut shaming are still things we deal with (ugh...why?) but I think (hope like hell) the conversation around these things is changing. I hope.

Overall, my thoughts on Knocked Out by My Nunga-Nungas are pretty mediocre. I don't love how Rennison approached a lot of things (can she stop implying being a lesbian is wrong or a reason to make fun of someone?) but I find I'm curious to see how things might change by the end of the series. Would I be as committed to finishing this readalong if the books weren't so quick and easy to read? I'm not sure. Reading time is a valuable commodity for a book blogger but curiosity is winning over the general ugh feelings I have with certain things in the books. We'll see what happens after we read Dancing in My Nuddy Pants for May 24.

Review of book one, Angus, Thongs, and Full-Frontal Snogging.
Review of book two, On the Bright Side, I'm Now the Girlfriend of a Sex God.
Posted by Books Etc. at 7:44 AM