Readalong: Dancing in My Nuddy-Pants 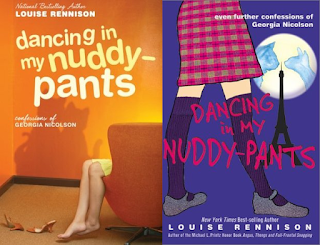 We're back with another installment in the Georgia Nicolson Readalong! Last time, when reading Knocked Out by My Nunga-Nungas, I found myself getting more and more frustrated with Georgia. I don't know if I was in a better mood or was just able to monitor my annoyance better but I found Dancing in My Nuddy-Pants to be more enjoyable. Learn more about the readalong on The Paper Trail Diary.

Here's the synopsis of the fourth book in the series:


Since Georgia's been dating the yummy scrumboes Sex God, Robbie, her glossy lips are always at the ready, and her "red-bottomosity" is kept under wraps. Along with Naomi the Sex Kitten's new litter (thank you, Angus), Robbie's announcement that his band will be traveling to Hamburger-a-gogo land (Georgia can only hope to go with), and a class trip to France, Georgia is one camper in a state of teenage splendiosity. The small trouble is, Georgia also wonders if Dave the Laugh might still be the guy for her, and when Robbie gives a surprise-ending twist to his travel plans, she gets a "weird feeling of reliefosity" that makes her wonder if she must venture out and bravely use her "red bottom wisely."

As Jess mentions in her review, not a whole heck of a lot happened in this book. Of course, in the mind of a teenager, SO MUCH IS HAPPENING. Her Sex God boyfriend might be going to America with his band but she can't keep her teenager lips off Dave the Laugh. There's also a field trip to France with her class and the good looking male French teacher. But...that's about it. Was it a huge problem? No. Not really. I still blazed through the book in one afternoon and didn't think about the lack of plot or events until well after the fact. (Blazed is appropriate as I was an idiot and read outside with no sunscreen on our holiday Monday...I might be a bit burnt...)

Georgia plays field hockey for her school and in this book is made team captain. And then, because she acts like the immature 15 year old that she is and irritates the caretaker yet again, she has the captainship taken away. I would have liked Georgia to really think about why she was no longer allowed to be the captain. You can tell when you're reading that she's upset but isn't fully sure why she's upset. Her parents never even find out - I don't know if they even knew she was captain in the first place. But, shortly after she gets sacked from the captain's job, in a fit of rare "maturosity", Georgia and the rest of the ace gang "snitch" on the two mean girls who essentially caused two other girls to get suspended for shoplifting. Clearly there's some correlation between the two events even if Georgia doesn't realize what it is yet.

One of the phrases that stuck in my head when I first read this series made its first appearance in this book:


[Dave] explained that "having the Horn" means fancying people. And it's got various stages. "You can have the Specific Horn, when you fancy one person. Then if it gets worse you get the General Horn, which is when you fancy loads of people. But worst of all is the Cosmic Horn."
He was making me laugh and feel funny at the same time, but I couldn't help asking, "What in the name of Lucifer's bottom is the Cosmic Horn?"
"That's when you fancy everything and everyone in the universe."
Blimey.

My friends and I used Specific, General, and Cosmic Horn all the time when we were teens (it may have been implied I had Cosmic Horn...so what if I had crushes on all sorts of boys? lol). I would love to know how Rennison came up with some of these ideas!

The next book in the series is Away Laughing on a Fast Camel (aka one of my favourite phrases from the series). The review posts will go up on June 14. I can't quite remember what happens next so I'm looking forward to it.

I'm going to leave you with the pic I posted on Instagram on Monday because it was a gorgeous day and I was so happy to finally be reading outside!

This is bliss. Happy #longweekend. #bookstagram #GeorgiaNicolsonReadalong #nofilter (seriously, no filter.)
A photo posted by Kaley (@kaleys23) on May 23, 2016 at 4:20pm PDT