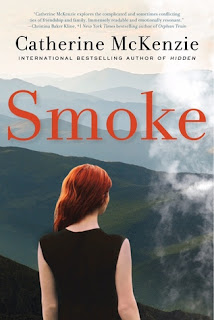 It's no secret that I adore Catherine McKenzie's novels. I'll tell anyone who will listen (and some who won't) that they should read her books because they're so great. One of my favourite things about her novels is they all feature something you wouldn't normally think of writing (or reading) a book about and her latest is no different. Smoke

was a novel that kept me turning the pages quickly because I was so invested in the story.


After a decade-long career combating wildfires, Elizabeth has traded in for a quieter life with her husband. Now she works as the local arson investigator in a beautiful, quaint town in the Rockies. But that tranquil life vanishes when she and her husband agree to divorce, and when a fire started in nearby Cooper Basin begins to spread rapidly. For Elizabeth, containing a raging wildfire is easier than accepting that her marriage has failed.
For Elizabeth’s ex-friend Mindy, who feels disconnected from her husband and teenage children, the fire represents a chance to find a new purpose: helping a man who lost his home to the blaze. But her faith is shattered by a shocking accusation.
As the encroaching inferno threatens the town’s residents, Elizabeth and Mindy must discover what will be lost in the fire, and what will be saved.

I liked that there was a hint of a mystery in this novel - though I wouldn't exactly classify it as such. I think what makes the book seem more mysterious is that there are so many secrets being kept by various characters. Secrets that, for the most part, don't actually have anything to do with the fire. The fire is the main mystery...what happened? Who set it? Was it done on purpose? As the town, and, by extension, Elizabeth, get closer to figuring out how the fire got started, even more secrets are revealed.

As I mentioned earlier, McKenzie has a knack for writing interesting stories. Not only are they interesting but they really dig into the human psyche. Why do people act in certain ways? Arranged is my favourite novel by McKenzie and it features arranged marriages. Hidden focuses on extramarital affairs. Smoke has characters who willingly fight fires, plus there's a marriage in trouble and a friendship that has completely fallen apart. How did these characters get to this point? And can they repair the relationships? Do they want to? Even though the main characters in Smoke are your average people you'd meet on the street, the way McKenzie writes them turns them into something so much more fascinating. You'll want to know what happens to them (and, in my case, make sure they're all going to be ok...you know me and the Happily Ever After!), as much as you want to know how the fire got started.

This novel is told in two perspectives. The chapters alternated between Elizabeth and Mindy. I liked this because it showed two very different approaches to the fire and also showed, first hand, the emotional upheaval each woman was going through over the course of the novel. What I didn't especially love was that Elizabeth's POV was told in first person whereas Mindy's was third. I'm not really sure what the reasoning was but, for me at least, it created more of a connection to Elizabeth when that didn't necessarily need to be the case. I loved that the story was broken up into days from when the fire started to the end of the novel. I liked this because it made it clear how much time had passed and it also further hit home how quickly a fire can start, spread, get out of hand, and (hopefully) be contained.

is on a pretty high pedestal!). I really enjoyed it! I loved the setting, the secrets, the characters...it all came together in such a great read. I think this one would be perfect for book clubs because there are so many elements to discuss. Have you read McKenzie's latest novel? What did you think of it?

*I received an ARC of this novel at BEA but I am also a member of Catherine's Street Team. As always, opinions are honest and my own.*
Posted by Books Etc. at 7:45 AM