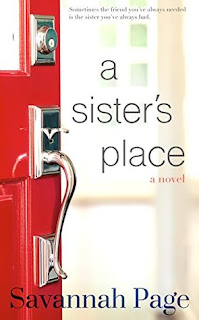 I've read (almost) all of Savannah Page's When Girlfriends series and loved them (you can find my reviews here). So when I learned Page had a new stand alone women's fiction novel, I knew I needed to read it. I could not put A Sister's Place

Sisters Gracie and Juliette Bennett used to be the best of friends. But over the years, time and distance have worn the ties of sisterhood that once bound them together. Each has been following her own life's path, growing further apart.
When their beloved grandmother Mimi passes the Bennett sisters are set to inherit her house--the charming Santa Barbara Craftsman, a family heirloom three generations old.
But there's a catch: In order to inherit their home away from home Gracie and Juliette must live at 1402 Laguna Lane for one year...together.
Now, in an unexpected and peculiar way, their paths intertwine. Gracie and Juliette have a chance to come together and reexamine their relationship, perhaps even become the kinds of friends only sisters can be. Because as they'll learn over the course of the trying year ahead, Mimi's clever plan is about more than preserving a piece of family history.
Differences will be embraced, pasts confronted, loyalties tested, and secrets revealed. And in their darkest hours Gracie and Juliette will have to decide if a sister's love is what they need to get through the year. If a unique friendship between sisters is what they've needed all along.

This book will really resonate with you if you have a sister (but you'll still love it even if you don't). My advice though? Make sure you read it when you know you're able to see or at least text your sis. My own little sister is off working on a cruise ship right now and thank goodness I'll see her soon otherwise it'd be hard to make it through the book. Page nails the sister relationship and I adored it. It's just so authentic and I don't think the book would have been as good had Gracie and Juliette's relationship not been so real.

I liked that each sister was very much her own person but you could still see the similarities between the two women. I think the fact that Gracie and Juliette had such distinct personalities made for a more interesting read. The chapters alternate between the sisters and their voices were fresh and different enough that I looked forward to the change in perspective. I liked getting to know each sister and finding out what made them tick, what their jobs were like, and who they were dating.

I really loved the actual story. It's so sad that the sisters' grandmother has died but her passing led to something amazing - the women finally reconnecting and remembering why they were once so close. Besides, Mimi actually has quite the presence in this novel. Between the letters she wrote to the girls for each season and the fact that they're living in her house, the reader really gets to know the grandmother Gracie and Juliette so adored. She actually reminded me a bit of my own amazing grandmother...though I don't think my grandma will leave her house to my sister and I and make us live together for a year. :) The story could seem a little far-fetched but Page manages to bring it all together in a way that makes perfect sense.

A Sister's Place will be one of my 2015 books I'll remember for awhile. Savannah Page's novel struck all the right chords for me and I think it will do the same for many others. It's sweet, sad, funny, and dramatic - just like real life. I highly recommend it!

*A copy of this novel was provided by the author for a CLP Blog Tour. All opinions are honest and my own.*
Posted by Books Etc. at 7:39 AM