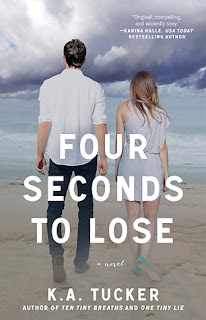 "This is my favourite K.A. Tucker book!"

That's what I say every time I finish one of her books. Every. Time. It was no different when I finished Four Seconds to Lose

, the third book in the Ten Tiny Breaths series. I absolutely adored reading Cain's story and Charlie was an intriguing heroine.


Owning a strip club isn’t the fantasy most guys expect it to be. With long hours, a staff with enough issues to keep a psych ward in business, and the police regularly on his case, twenty-nine-year-old Cain is starting to second guess his unspoken mission to save the women he employs. And then blond, brown-eyed Charlie Rourke walks through his door, and things get really complicated. Cain abides by a strict “no sleeping with the staff” rule. But being around Charlie challenges Cain’s self-control…and it’s been a long time since any woman has done that.
Twenty-two-year-old Charlie Rourke needs a lot of money, really fast, in order to vanish before it’s too late. Taking her clothes off for men makes her stomach curl but Charlie tells herself that at least she’s putting her acting and dancing skills to good use. And though her fellow dancers seem eager to nab their sexy, sophisticated, and genuinely caring boss, she’s not interested. After all, Charlie Rourke doesn’t really exist—and the girl pretending to be her can't get distracted by romance.
Unfortunately, Charlie soon discovers that developing feelings for Cain is inevitable, and that those feelings may not be unrequited—but losing him when he finds out what she’s involved with will be more painful than any other sentence awaiting her.

I always take a break between Tucker's books when they're part of the same series since they are companion novels and I don't always want to leave the perspective I just finished. After I was done One Tiny Lie (review here), I didn't know if I was going to like reading from Cain's POV. Boy, was I wrong. You get a hint of his character from the previous books and you know he's not a stereotypical strip club owner. In this book you really get the chance to find out how he got to where he is and why he acts the way he does. Speaking of the companion books, I really liked having the chance to see what characters from the previous books had been up to.

I liked that there was a bit of mystery surrounding Charlie. You know right off the bat (even if you didn't read the synopsis) that "Charlie" isn't real. But what you don't know is who the girl pretending to be her really is. Or why she's using a fake identity or trying to get a job in a strip club. Tucker sucks you into the story right away and continues to build on the mystery until you're flipping pages as fast as you can to find out what's going to happen next.

You eventually learn Charlie's full history - but I'm not telling you what it is (did you really think I would?). I will tell you that it's pretty intense. And scary. I love how Tucker is able to balance the drama, angst, and sexual tension so perfectly in her books. It's such a gripping story and the hot romance only adds to how good the novel is.

I loved Four Seconds to Lose. Cain is such an interesting character and I'm so happy K.A. Tucker decided to explore his side of the story and give him the woman he deserved. Tucker remains firmly on my "favourite author" list. If you haven't read any of her books yet, I highly suggest you do. They're addictive in the best possible way!

*An ARC was provided by the publisher, Simon & Schuster Canada, in exchange for review consideration. Opinions are honest and my own.*

(courtesy of my library) not long after this one and that honestly is my favourite one of the series. There was just something about Ben and Reese that I absolutely adored. It was the best way to end the series.
Posted by Books Etc. at 9:23 AM