After a crazy (but great) first day at BEA, I was ready to move onto my evening activities. First up, as I previously mentioned, was the Simon & Schuster hosted event for Laura Dave's Eight Hundred Grapes

It was a happy coincidence that I had read Eight Hundred Grapes about a week and a half prior to BEA - before I even knew I'd be going to this event. I'm really glad I did because book events are so much better when you've read the book being talked about! I wasn't originally invited to this event and it was thanks to the amazing generosity of Melissa of Chick Lit Central (who I would finally be meeting that night) that I'd be going. She reached out to BookSparks, who had invited her, and asked for me to be put on the guest list. Thank you, Melissa!

It was adventure getting there (my first Uber ride was interesting), but eventually the girls (Tiffanie of Mostly YA Lit, Andi of Andi's ABCs, Tiffany of About to Read, and Gail of Ticket to Anywhere) and I arrived at the venue, The Park. The restaurant was so nice and I adored the twinkle lights strung up around the outdoor seating.

We were able to meet author Laura Dave immediately. She was as sweet in person as I expected! She actually remembered tweeting with me a few days prior (thank you, Mom, for giving me a unique name, and thank you, self, for giving yourself a Twitter handle that includes your name) and was so appreciative of my kind words about her book! I always love an author even more if they are as thankful for my support as I am to be meeting them.

There was a ton of food to be eaten but, I admit, I was more excited for the above desserts and wine! There were three kinds of each, though I only tried the two white wines (the Prosecco was dee-lightful).

While I was thrilled to finally meet Laura Dave, I may have totally fangirled when two other guests walked into the event...LIZ AND LISA. Ahhh! Liz Fenton and Lisa Steinke are the two women behind the, now defunct, Chick Lit is Not Dead blog. They're authors as well  (so they're focusing more on their own work than reviewing other novels) and I absolutely adore them. I awkwardly hung around so I could meet them and, after telling them that I really love their work, mentioned it was Melissa who got me into the event as I was wait-listed for the event my other dinner companions were going to. Turns out they were going to that event too and Liz told me they wouldn't leave without me and we'd all go to the event together. Speechless.

After chatting books, life, and being a twentysomething with two of the girls from Simon & Schuster (I wish I remembered their names because I totally adored them), taking pictures with Laura, and picking up a finished copy of Eight Hundred Grapes (now signed and personalized!) and a great mug, Liz, Lisa, Melissa, and I headed out to Ladies First, an event hosted by Jennifer Weiner and Atria Books, in support of VIDA: Women in Literary Arts.

True to her word, Liz got me in the door and I was able to surprise Samantha Stroh Bailey (in the blue striped dress above) and Meredith Schorr (in the black and white striped dress above), two of the other women I'd be dining with that evening! While the event was free, you could give a $30 donation and get a tote and five signed books from any of the authors at the event. And there were a lot of authors! Jennifer Weiner, of course, Jodi Picoult (who we apparently walked right by when we came out of the elevators), Elin Hildebrand, Jen Lancaster (in the flower dress and crown in the group shot above), and so many more. It was quite hard to pick which books I wanted! There was a lot of food here too but since I had had so much at the previous event I passed on everything...except the milkshakes. Give me ice cream and I am a happy girl. :)

I ended up with Colleen Hoover's Confess

(I got a picture with her but didn't think to get my copy personalized. Stupid. BUT she said I looked familiar after I said I was at the Atria Toronto event last fall. Squee!), Maureen Johnson's The Name of the Star

(I've loved her for so long and to be able to say hi and get a signed book was so cool!), Elisabeth Egan's A Window Opens

(which she personalized for me - she's so sweet!), and Spinster

by Kate Bolick (which wasn't actually signed and she was busy chatting with someone and didn't even look over to me while I was hovering sooo...that sucks.).
Meredith, Samantha, Melissa, and I had dinner reservations to get to so we scurried off to our next destination. The cab ride took forever so we eventually got out and walked the last couple of blocks to the restaurant (Trattoria Trecolori), just as it started raining, of course! Along with the four of us, Julie Valerie (who I had met for lunch earlier in the day), Francine LaSala, Amy (who also reviews for Chick Lit Central), and Lynn Marie Hulsman were also there. There was so much to talk about (books! BEA! life! wine!) and so much to eat and drink that it felt like we were there for no time at all. I pretended to be oblivious as Meredith, who was seated next to me, ordered desserts for Sam and I (her birthday was the day before, mine the next day), and act surprised when a piece of the most decadent chocolate cake was placed in front of me. :) Amy and I quickly devoured the cake and then, eventually, it was time to head home. Goodbyes were said (sad!) and I powerwalked home to the apartment and my roomies. 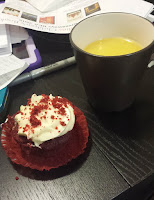 Because there were six girls and only two keys, we had to do some creative planning to make sure no one got locked out of the apartment. I knew I'd be the last one home that night so I texted Emilie to say I was on my way so she'd let me in when I buzzed. When I opened the door to our place I was greeted with the sweetest surprise: five girls yelling, "Happy birthday!", cupcakes, and mimosas. The cupcakes were from Donna Bell's Bakeshop - which was opened by Pauley Perrette (Abby on NCIS) (boy, was my sister jealous). I had the red velvet cake and a mug (well, two) of mimosa before heading off to bed.

My first day at BEA was a success and I didn't get lost. I couldn't wait to see what the second day, and my birthday!, had in store!