Life as a Bookworm: A Reader in Australia

Many of you know that I had a trip of a lifetime a couple of months ago. Thanks to my superstar family, I was able to accompany my boyfriend, Luke, and his dad as they travelled to Australia to visit their family. It was, in a word, incredible. I've been meaning to write about the trip for ages (we've been back for over two months now) but just haven't gotten around to it. I discovered a solution for this procrastination: writing multiple posts! In this one I will strictly talk about the bookish things I did and encountered while I was there. In another post (which will come sooner rather than later, I hope) I'll write about the awesome things we did and saw.

First up...when going on a sixteen day vacation, which includes a mother effing long plane ride (thankfully, with no mother effing snakes...sorry, bad joke), what does a bookworm plan to pack first? Books, of course. 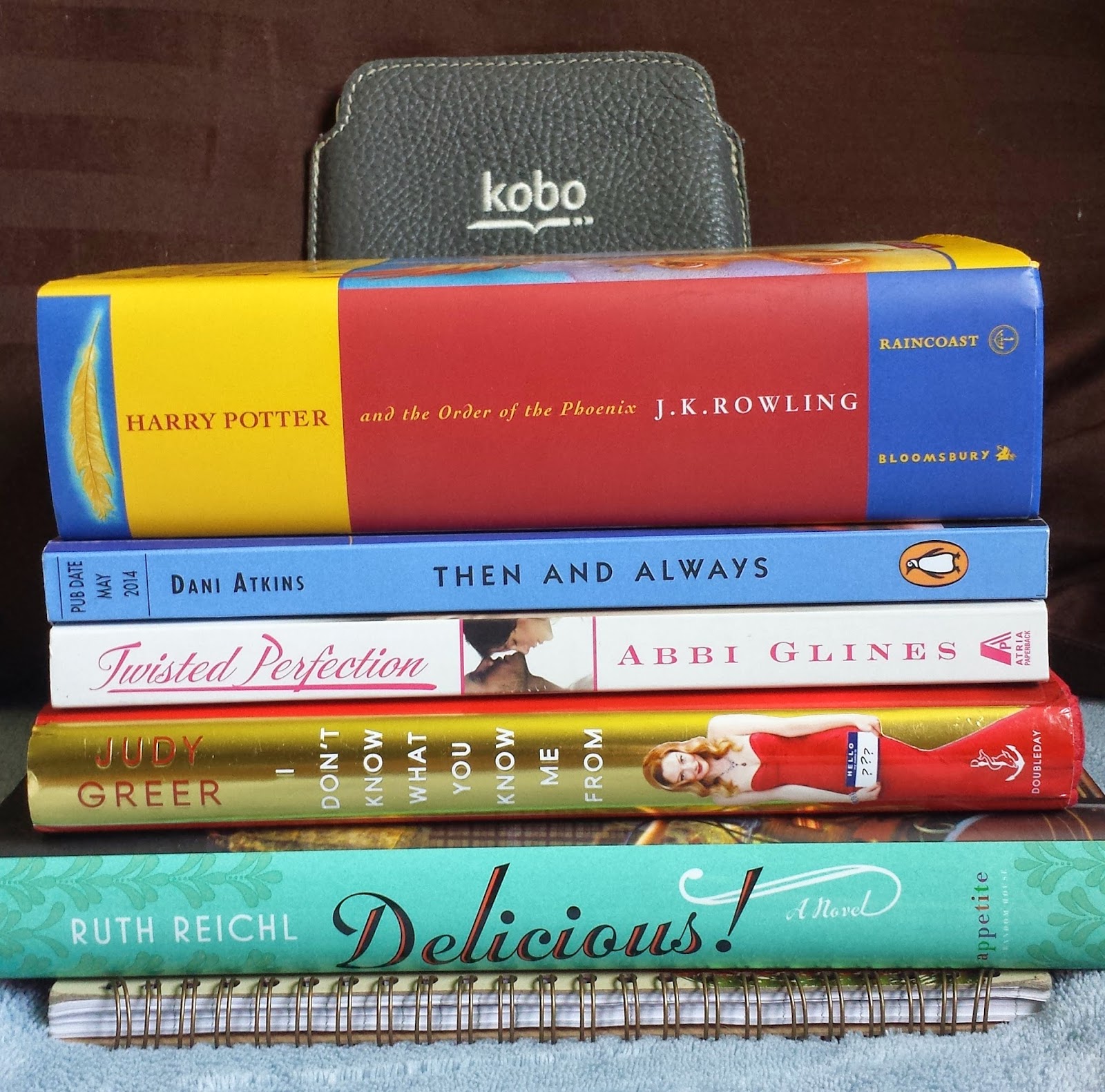 This was the stack that accompanied me to the other side of the world. My plan was to complete the following (links lead to reviews):

Delicious! - Ruth Reichl
Then and Always - Dani Atkins
Harry Potter and the Order of the Phoenix - J.K. Rowling
Cure for the Common Break Up - Beth Kendrick
I Don't Know What You Know Me From - Judy Greer
The Never Never Sisters - L. Alison Heller
The Man Test - Amanda Askell
Love and Chaos - Gemma Burgess (which I just realized isn't in the picture...annoying...and I'm too lazy to retake it!)
Twisted Perfection - Abbi Glines

That may seem ambitious, even for a speedy reader like myself but I'm happy to report that I have now read all of them, with the exception of Twisted Perfection. Woot!

My sister and I went to Florida two and a half years ago and I read on the plane with no issue. We would be flying for almost 20 hours all together this time around which meant tons of time for reading! Part way through our flight to LA I realized the worst: I could no longer read on a plane. Nooooooo. A headache hit almost as soon as I tried to focus on the pages so that plan was out. I managed to get a few pages read here and there on all flights but it just wasn't enough. Ah well.

I hadn't actually intended on taking Delicious! with me. I was about two thirds of the way through by the day we left and I just couldn't leave it behind. I finished that one on our first or second day there when we were being pretty low key and just hanging around the house (and recovering from our jet lag). We were staying with Luke's aunt and uncle and since they are both readers, they had no problem with me snuggling on the couch with my book. Once I finished Delicious! I finished Then and Always (so-so), Cure for the Common Break Up (loved), which I had to have read for blog tours, and The Never Never Sisters (ok but ultimately forgettable) in quick succession.

Early on in our visit, I was brought to the bookstore in the small town of Kingsliff (next to the tinier town we were staying in). It's called Boardwalk Books and it was delightful. It was here I first realized how accustomed I've become to using my phone's camera. It's easy to take a sneaky picture of a store or something with a phone but not so much with a point and shoot (and especially not with the boyfriend's fancy pants camera). I really wanted a picture of the store but it just would have been too awkward! So just imagine a super cute little bookstore, ok? It was interesting to see the different book covers (I actually saw Delicious! there with a lovely bright blue cover). Some were the Canadian covers, some English, some American. And the prices! Hoo boy. I saw The Cuckoo's Calling there in a trade paperback size (not the small pocket book paperback but larger). Amazon.com has the print copy listed at $18.00 (before discounts) and Chapters Indigo has it listed at $20.00 (before discounts). In the store in Australia? $30. The price of a hardcover in Canada. Ack.

My sole purchase in the bookstore? This beauty: 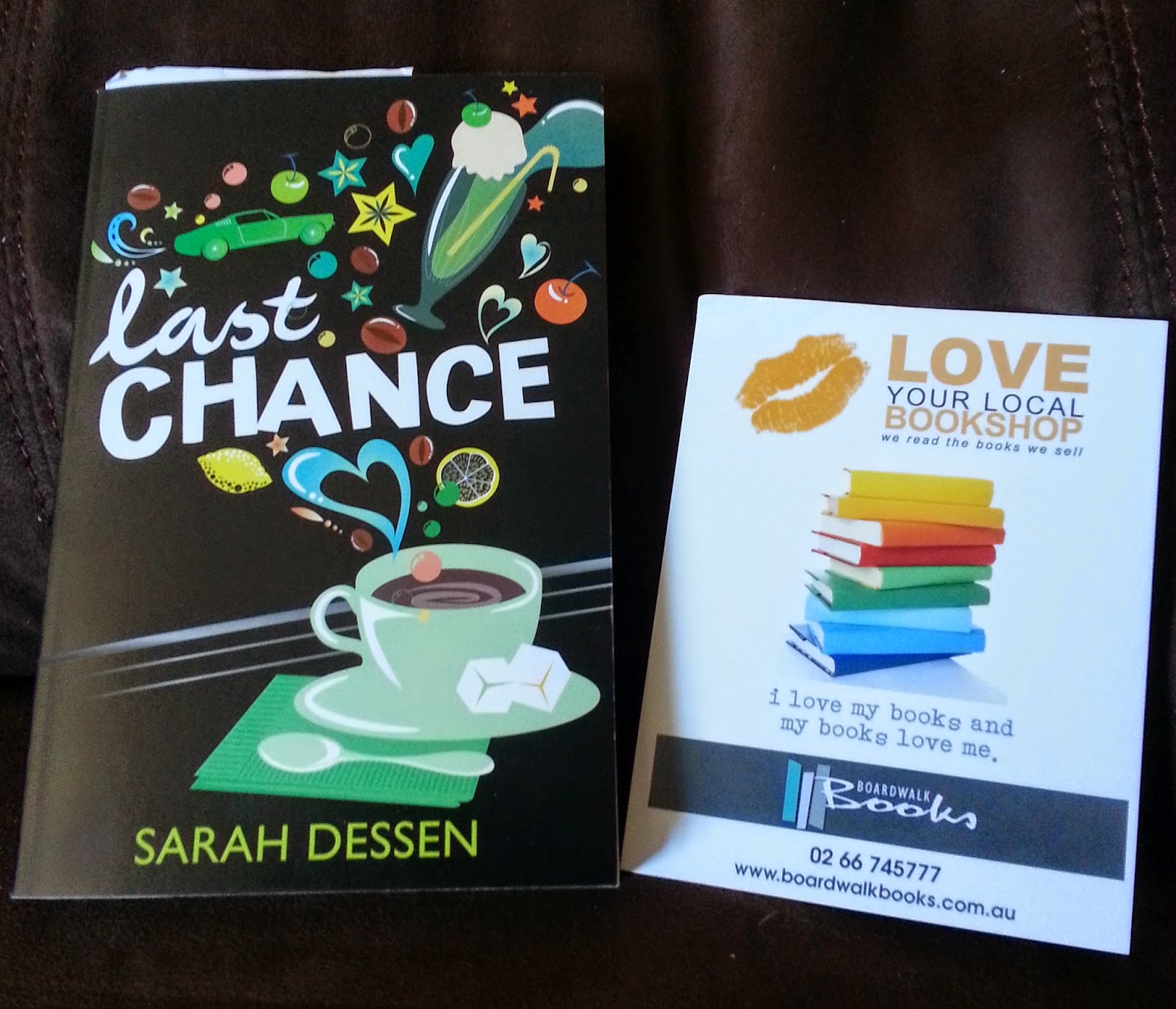 This is the British cover and title of Sarah Dessen's Keeping the Moon. I already own that one but I don't have this cover. I just had to have it. She's my favourite author, after all.

I had brought my laptop with me on our trip because I knew I'd have to do some blogging. And, ok, I may be mildly addicted to social media. Here was my second reading related problem: no wifi. It may seem ridiculous but I just about lost my mind. On the one hand, it was really awesome to not have a constantly dinging phone and to be able to really be present in the moment. Highly recommended for all trips. BUT. I had blogging to do as I had assumed I would have wifi and didn't plan ahead and schedule posts. So, I did what any bookworm without wifi would do...I went to the library! The Kingscliff library was pretty small but it seemed to get the job done for its patrons. I didn't look around too much since I only had limited time there. Unlike my local library, you could only use the wifi (with the accompanying password) for two hours. My favourite thing about the library was the scenery. It was nestled into some trees and it was really nice to look out at the greenery while writing. The only downside of its locale was the need for the snake warning sign. Thankfully I never saw any snakes while I was there! 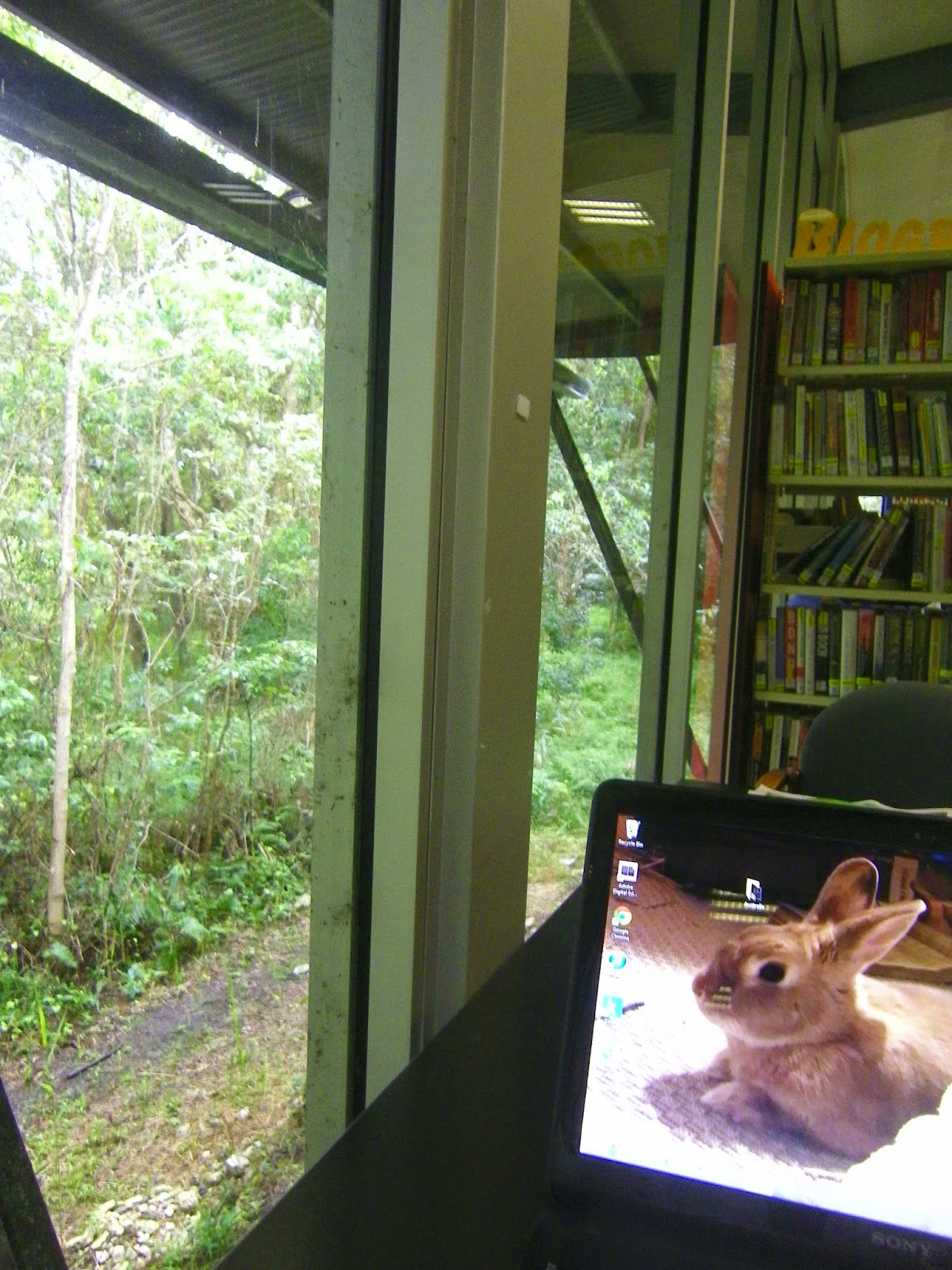 The second week of our trip had us staying in a farm house with Luke's uncle's son and his wife and his son and his girlfriend (Jodie). (Confused yet? Welcome to my vacation...I needed a family tree!) One of the first things I did was check out the bookshelves they had in the house. It was a holiday rental house and I was happy to see they had a good variety of books for the tenants to browse. Including two books by Canadians! If I remember correctly there was a Rohinton Mistry novel and a Margaret Atwood novel (there were also a couple of Atwood books in the bookstore). 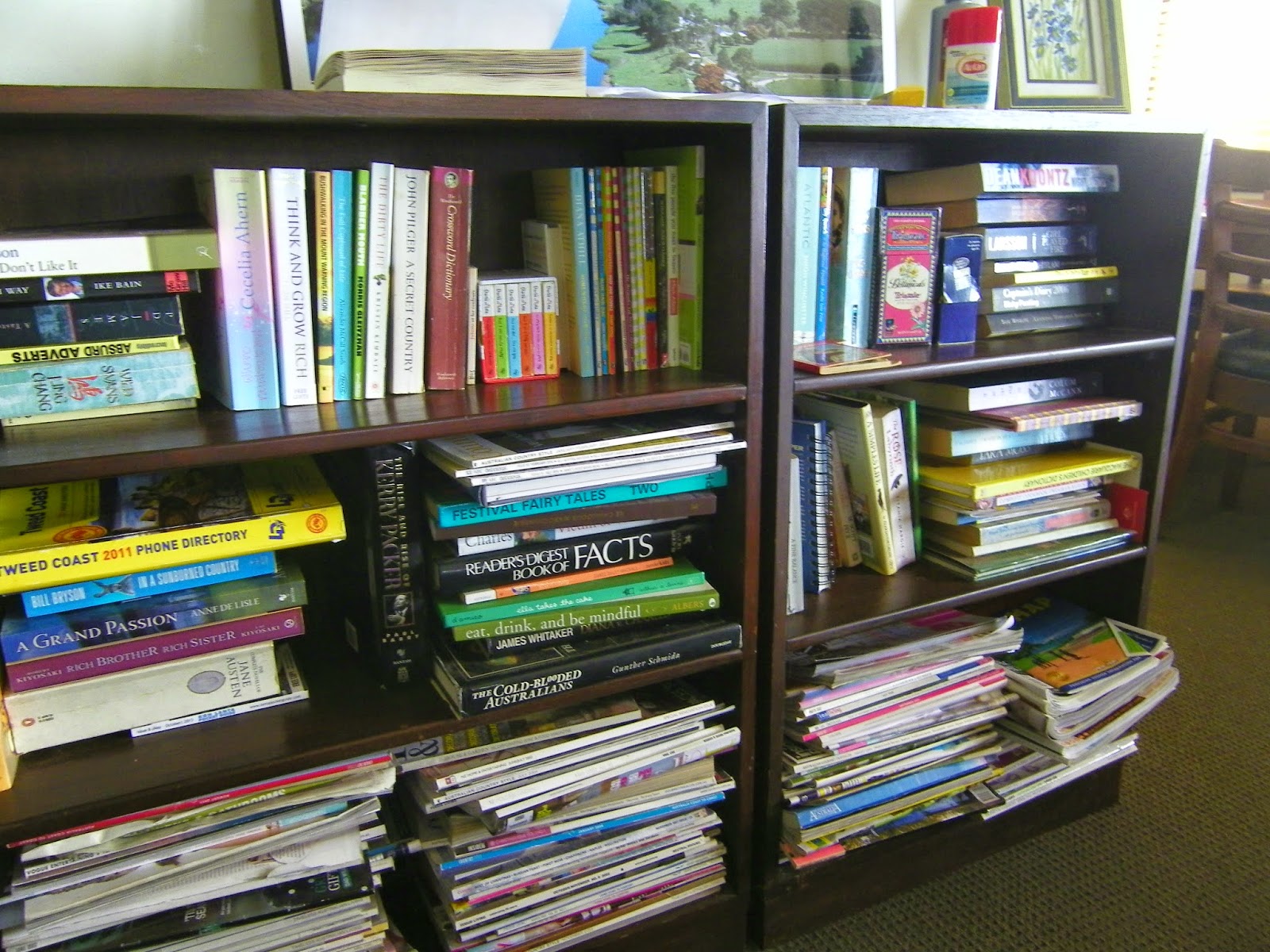 This farmhouse gave this bookworm a couple of awesome things. The first was a fellow twenty something female reader. Jodie and I hit it off right away, especially when we realized we were both huge readers. She was reading a Nicholas Sparks novel when she arrived, which was a departure from her usual reads, and our discussion evolved from there. She actually gave me that Sparks book to take home with me since I hadn't read it yet. Not only was that very nice of her, it's also cool because its cover is one I wouldn't be able to get here. Once I learned she had read and loved The Hunger Games I told her she needed to read Divergent asap. She agreed and a month or so later I got a tweet from her saying she read it and did love it. Book pusher success! Then, just a week or so ago, she sent me another tweet in which expressed her displeasure for the end of Allegiant. Oops. :)

The second awesome thing about this house was the view we had. Oh my goodness, it was beautiful. My favourite reading spot was on the second floor balcony. It was so easy to get up at 7am, have a tea and biscuits, and read. Just look at this! 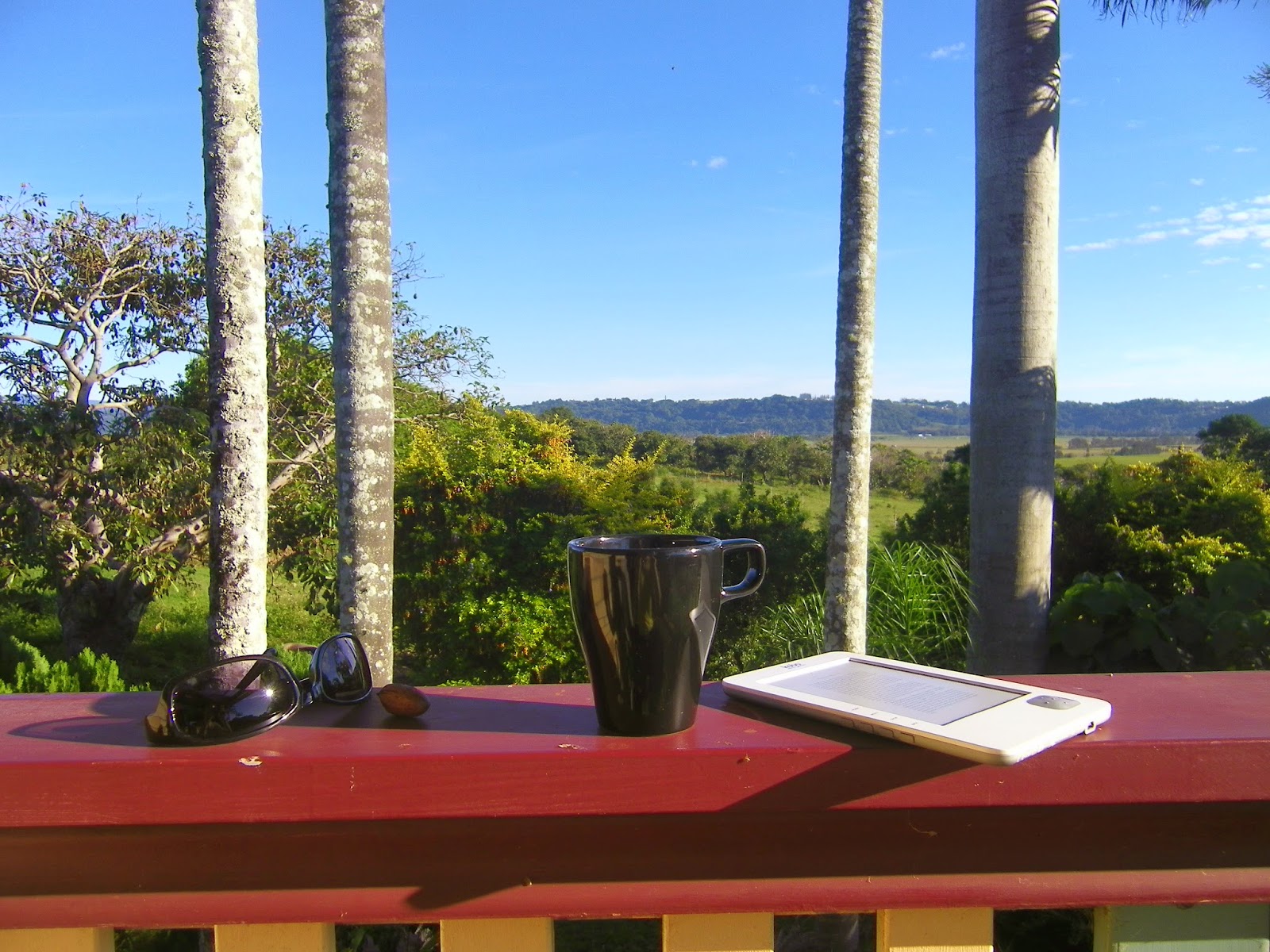 I spent a fair bit of time out there... 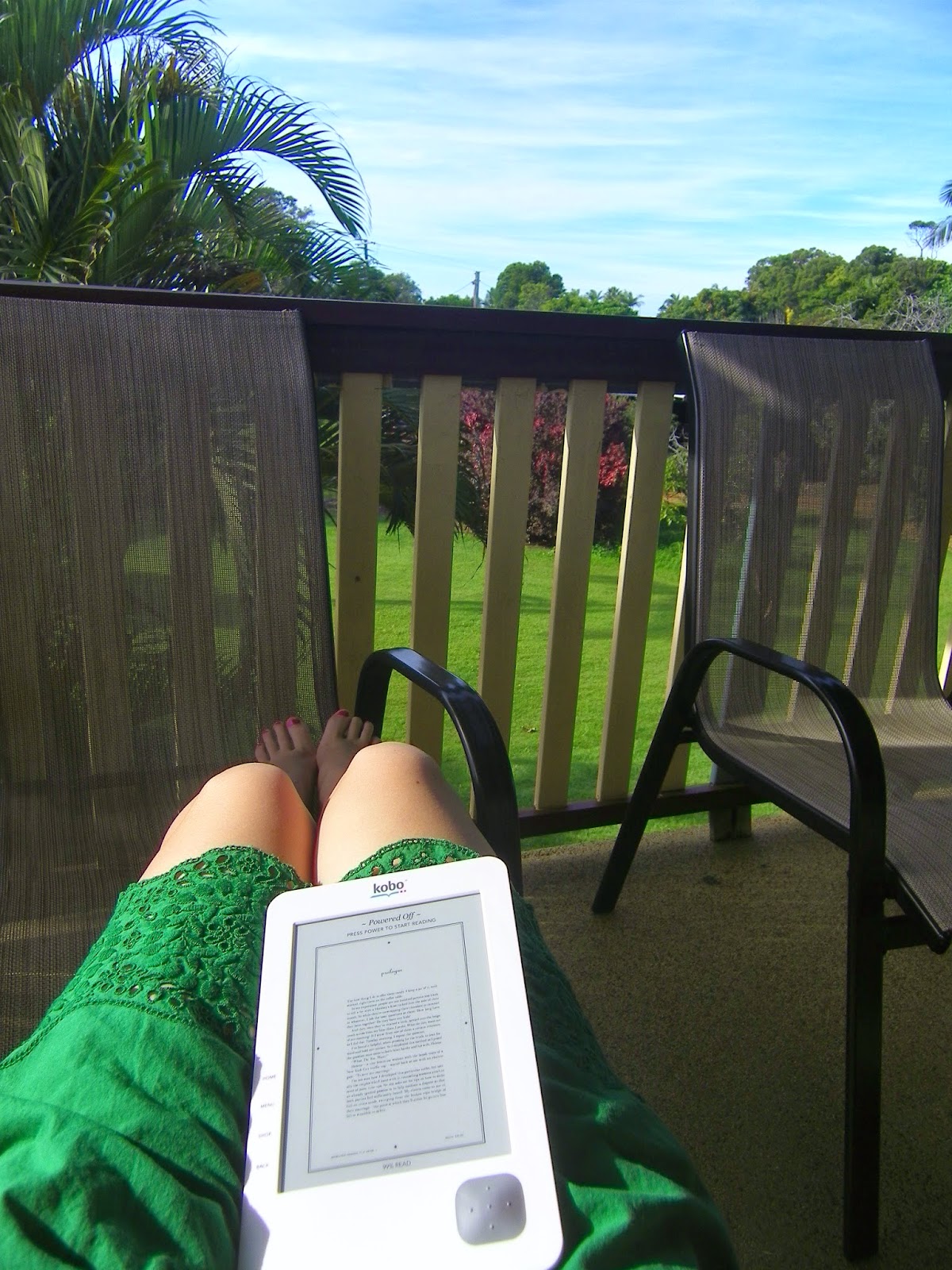 I also got some reading done on my birthday in a different, but equally beautiful, spot:

Sigh. I would like to go back now, please.

As I mentioned, I got almost every single book read (or at least started) while I was away. I saved Harry Potter and the Order of the Phoenix for the day before and day of my birthday as an extra treat. We stayed in a hotel the night before and while Luke and his dad watched TV, I happily read and drank some tea (hey, that rhymes...). Love and Chaos was a perfect holiday read - it's about a group of twentysomething girls in Brooklyn. The Man Test let me down, sadly, so I rushed to finish it before I got on the plane in Brisbane. I started I Don't Know What You Know Me From on the plane from Brisbane to LA and got a fair bit done before the headache took over. This was also a great non-fiction vacation read (and a great read overall) and I got another chunk done in LA while waiting for our flight back to Toronto.

And that's that. The bookish part of my wonderfully awesome trip to Australia. Stay tuned for another post (or maybe two...) on the rest of my vacation. Spoiler alert: there will be koala pictures!
Posted by Books Etc. at 8:19 AM