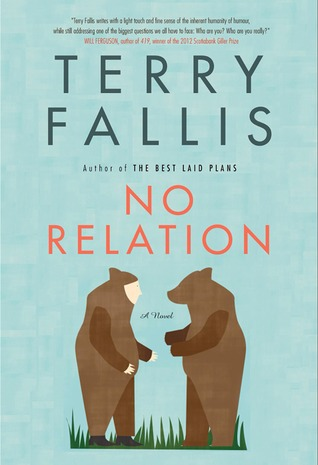 Believe it or not, No Relation is my first Terry Fallis novel. I have no excuse either - all three of his previous novels are in my house! I figured it was high time to finally read one of Fallis' books so when I had the chance to review his latest book, I jumped at it. I'm really glad I read it and I found it to be a good read and it was really funny.


This is the story of a young copywriter in New York City. He's worked at the same agency for fifteen years, and with a recent promotion under his belt, life is good. Then, one morning this copywriter finds himself unceremoniously fired from his job, and after he catches his live-in girlfriend moving out of their apartment a couple hours later, he's also single. Believe it or not, these aren't the biggest problems in this copywriter's life. There's something bigger, something that has been haunting him his whole life, something that he'll never be able to shake. Meet Earnest Hemmingway.
What's in a name? Well, if you share your moniker with the likes of some of the most revered, infamous, and sometimes dreaded names in history, plenty. This is Earnest's lifelong plight, but something more recent is on his plate: His father is pressuring him to come home and play an active role in running the family clothing business. And as a complex familial battle plays out, Earnest's inherited name leads him in unexpected directions. Wry, clever, and utterly engaging, No Relation is Terry Fallis at the top of his form.

I found No Relation to be a good novel. That being said, I didn't love it as much as I'd expected to. There's no denying that Fallis is a good writer, and a funny one, but there was something keeping me from loving this book. And I'm almost positive whatever this something is, it's a personal thing. I have no problem recommending this novel to others. It just wasn't the perfect book for me.

The humour in this novel isn't going to be for everyone but I thought it was hilarious. It was sort of a dry wit, and very clever. I don't have any good examples because it's hard to share the funniness out of context!

There was a lot going on in this novel but, for the most part, everything worked well together. I loved meeting all of the others in the Name Fame group (talk about a cast of characters!). I loved the family dynamics (even if I was getting very frustrated with Earnest's father, EH3!). In fact, I could have happily read a whole novel from sister Sarah's perspective. The mystery of the struggling family business was much more interesting to me than the quest to vanquish Hemingway's ghost (it's not as sci-fi as that sounds, trust me). I enjoyed that part because there were some entertaining and sweet moments, and it allowed for seeing some new locations, but it just wasn't my favourite part of the book.

Even though I wasn't super in love with No Relation, I still plan on reading all of Terry Fallis' other novels and I will definitely be keeping an eye on what he comes out with next.

*A copy of this novel was received from the publisher, Random House of Canada, in exchange for an honest review.*
Posted by Books Etc. at 9:02 AM