Review: The One and Only 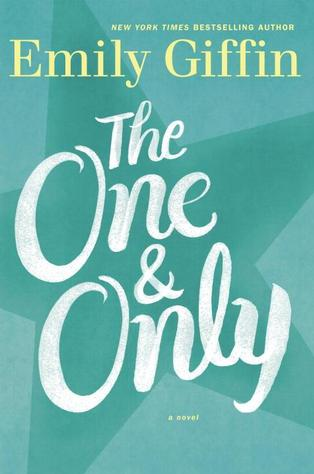 Emily Giffin is one of my autobuy authors. I'm always ridiculously excited for her new book and her latest, The One & Only, was no exception. I had been looking forward to this one for well over a year, ever since I learned that Giffin had switched publishers and was going to be publishing with Random House for her upcoming book. I scored an ARC (thank you, Lindsey!) and when I was finally able to set aside some time to read it I was rewarded with a typical Giffin novel, heartfelt, with a mix of serious and humorous, and realistic. All in all, an enjoyable read.


Thirty-three-year-old Shea Rigsby has spent her entire life in Walker, Texas—a small college town that lives and dies by football, a passion she unabashedly shares. Raised alongside her best friend, Lucy, the daughter of Walker’s legendary head coach, Clive Carr, Shea was too devoted to her hometown team to leave. Instead she stayed in Walker for college, even taking a job in the university athletic department after graduation, where she has remained for more than a decade.
But when an unexpected tragedy strikes the tight-knit Walker community, Shea’s comfortable world is upended, and she begins to wonder if the life she’s chosen is really enough for her. As she finally gives up her safety net to set out on an unexpected path, Shea discovers unsettling truths about the people and things she has always trusted most—and is forced to confront her deepest desires, fears, and secrets.
Thoughtful, funny, and brilliantly observed, The One & Only is a luminous novel about finding your passion, following your heart, and, most of all, believing in something bigger than yourself...the one and only thing that truly makes life worth living.

Giffin is well known for tackling issues that are a little bit uncomfortable to read about. Most of the time the issue is infidelity, which isn't a favourite topic for many people. This time around, she writes about another difficult topic: falling in love with someone you're not supposed to fall in love with. The synopsis doesn't give away who she falls for so I'm not going to either. What I'll say is that I sort of anticipated it and I was very conflicted about it. At first I was just as weirded out as I knew others would be but, as the story went on, I found myself desperately hoping that they could overcome the adversity they were facing (had to throw in a sports cliche!).

Cover talk time. I would guess that this cover looks different than her others because she changed publishers. That would be a fair assumption, yes? In a way it's too bad because I really did love the other covers. But, I think the folks at Random House created a cover that had the same feel as the others but was still original. (Not so) fun fact: Giffin had posted something on her Facebook page ages and ages ago asking what colour we thought her next cover would be. I actually guessed teal! I thought it made the most sense. Little did I know the colour would actually reflect part of the novel. Did you pick up the fact that Walker's colour is teal, just like the cover?

I have to admit that, at times, I found myself wondering if I would have loved this book as much if it had been written by a no-name author. Did I enjoy it simply because Giffin wrote it and I've been eagerly gobbling up her books ever since I discovered Something Borrowed? I have no idea. I feel like I probably would have picked this one up anyway (especially with a catchy cover) because I wouldn't have been put off by the football storyline (I think a lot of people seriously disliked that part), even though I'm not personally a football fan. If I'm completely honest, I bet I would have given an unknown author three stars instead of the four I gave The One and Only. Right now I'm choosing not to read too much into that!

I really liked Emily Giffin's latest novel. I didn't love it and I don't think The One & Only is one of her best. It's still enjoyable and if you like Giffin and her usual storylines, I think you'll like this novel, too. I can't wait to hear what everyone else thinks of this one!

*A copy of this novel was provided by the publisher, Random House of Canada, in exchange for an honest review.*
Posted by Books Etc. at 7:16 AM

Email ThisBlogThis!Share to TwitterShare to FacebookShare to Pinterest
Labels: Emily Giffin, new release, The One and Only