Review: Listen to the Squawking Chicken 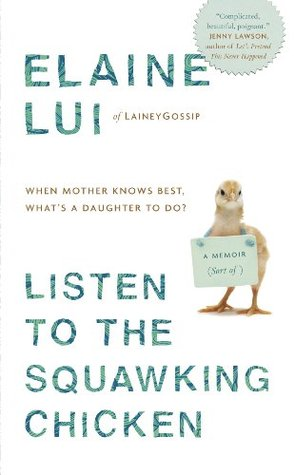 Many people know Elaine Lui as Lainey Gossip, the voice behind a hugely popular gossip blog. I've been aware of the site for awhile but I'm not a consistent reader and follower. The Lainey I know is the one who co-hosts the new Canadian talk show, The Social. I like the show because all the women have different personalities and opinions and I watched it almost every day while I wasn't working. When I heard that Lainey was writing a book, a memoir of sorts, I knew I wanted to check it out. She has strong writing skills and an equally strong personality, so I knew I was in for a good read when I picked up Listen to the Squawking Chicken: When Mother Knows Best, What's a Daughter To Do? A Memoir (Sort Of).


Most people think I’m exaggerating at first when I talk about the Chinese Squawking Chicken. But once they actually spend some time with her, they understand. They get it. Right away. She’s Chinese, she squawks like a chicken, she is totally nuts, and I am totally dependent on her.
When Elaine Lui was growing up, her mother told her, “Why do you need to prepare for the good things that happen? They’re good. They won’t hurt you. My job is to prepare you for the hard times, and teach you how to avoid them, whenever possible.” Neither traditionally Eastern nor conventionally Western, the Squawking Chicken raised her daughter drawing on Chinese fortune-telling, feng shui blackmail, good old-fashioned ghost stories, and shame and embarrassment in equal measure. And despite years of chafing against her mother’s parenting style, Elaine came to recognize the hidden wisdom—and immeasurable value—in her rather unorthodox upbringing.
Listen to the Squawking Chicken lays bare the playbook of unusual advice and warnings used to teach Elaine about hard work (“Miss Hong Kong is a whore”), humility (“I should have given birth to a piece of barbecue pork”), love and friendship, family loyalty (“Where’s my money?”), style and deportment (“Don’t be low classy”), finding one’s own voice (“Walk like an elephant, squawk like a chicken”) among other essentials. Along the way, Elaine poignantly reveals how her mother earned the nickname “Tsiahng Gai” or “squawking chicken” growing up in Hong Kong, enduring and rising from the ashes of her own hard times.
Listen to the Squawking Chicken is a loving mother-daughter memoir that will have readers laughing out loud, gasping in shock, and reconsidering the honesty and guts it takes to be a parent.

Since I had been watching The Social for so long, I had an idea of what the Squawking Chicken was like. I absolutely loved getting to know more about her, her parenting style, and Lainey as I read this book.

I grew up in a small town a few hours north of Toronto. I mention this because there was hardly any diversity in my town. I could probably still tell you the name of every person of colour (other than the large number of Native Canadians) in my high school, and I graduated nine years ago. Why is this important? It's not, really. But while I was reading this book I realized how little I knew about Chinese culture. I had never heard of Filial Piety, for example. Very basically, that's taking care of your parents and having your happiness be dependent on theirs (instead of parents putting their child's happiness first, which what Westerners do). I liked learning more about mahjong and feng shui. And I liked seeing how Lui's world was shaped by Eastern and Western influences.

One of the best things about this book was that it was totally Lainey. I read the book in her voice (which makes me think that the audiobook, which she narrates, would be amazing to listen to) and her sharp wit and brash personality really came through.

I also loved how candid Lui was. Memoirs are, by definition, factual. But sometimes, just sometimes, they're not completely truthful. They paint a rosier picture of the subject than is perhaps 100% accurate. That wasn't the case with this book. Of course, I can't say that for certain since I haven't lived Lainey's or the Squawking Chicken's lives but there are so many stories in this book that laid it all out there and I'm so happy she did.

Listen to the Squawking Chicken was such a great read and a really awesome, and unique, mother/daughter story. The Squawking Chicken is unlike any mother you have ever met before which is probably why her daughter, Elaine Lui aka Lainey Gossip, is so unique as well. I really enjoyed reading Lui's "sort of memoir" and I think so many others will as well. Pick this one up the next time you're at the store or your library. I don't think you'll be disappointed! And bonus: this would be a great Mother's Day gift for the reading mom in your life!

*A copy of this novel was provided by the publisher, Random House of Canada, in exchange for an honest review.*
Posted by Books Etc. at 8:02 AM