Review: My Life With The Walter Boys 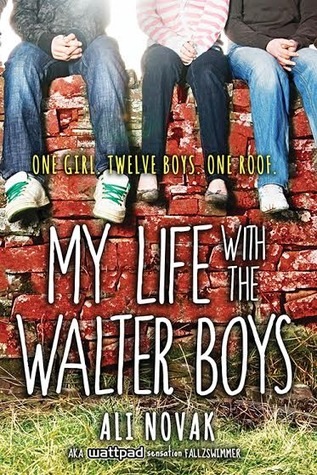 I love contemporary young adult novels. So when I got the chance to read the newly published My Life with the Walter Boys by Ali Novak, I was pretty excited. I was sucked into this debut novel and I really enjoyed the time I spent reading it.

Here's the (very short) synopsis from Goodreads (which differs from others I've seen!):


Sixteen-year old Jackie Howard knows nothing about her new guardian Katherine Walter when she moves from New York to Colorado. After discovering that Katherine has twelve boys, Jackie fears that living in the Walter house isn't going to be easy. It's just icing on the cake that the boys look like Abercrombie models...

This was one of those books that I really loved reading but am aware that it may not be for everyone. It's not, exactly, a great book. There were a few problems and little things that irked me. I felt like twelve boys (well, eleven) was too much. I couldn't keep track of all of them! It added a lot of confusion that didn't need to be there. Novak could have cut out six boys and the story would have still had the effect she wanted. Two of the boys were actually nephews/cousins and it drove me crazy that it took until almost the end of the book to find out why they were staying there - where were their parents? I also couldn't understand how cruel the boys were being and that their parents didn't do much of anything about it. I get that raising twelve kids, now thirteen, would be rough but you need to have some sort of handle on your kids. Finally, how did the parents not say anything when Jackie and one of the boys started dating? They had a rule that whenever one of the boys was alone in a room with her the door had to stay open. Fine. But really? No talk about dating someone who's living in the same house as you? All of these things were fairly minor and, even though they annoyed me, it didn't take away from my overall enjoyment of the book.

I've gotten into the practice of always reading the acknowledgements and the about the author pages in the books I read. Part of it is because I've been pleasantly surprised to see my own name in the acknowledgements and I know how important it is for the people whose names are in there, but also because I like learning what I can about the author. When reading about Ali Novak I learned that she's only 22, started writing this book when she was just 15, and was a Wattpad sensation. I find that this sort of thing, young authors being noticed because of online platforms or social media, happening more often and I think it's kind of awesome. Of course, I'm also a bit jealous that she's published a book by 22 while I, at the same age, had just finished a fifth year of post secondary school because I didn't know what I wanted to do with my life (and now, at almost 27, am still wondering...). But seriously, I like how things are changing in publishing and that books like these are getting a chance to find readers.

As I was nearing the end of the book I realized that I was likely reading what was to be the first in the series. As I was preparing this review, I saw on Goodreads that it will become a series. This is both exciting and not. Let's start with the negatives...it seems like every YA (and new adult) book out there starts as a story that could totally be a standalone and then it turns into a series. Also, this is another series that is going to switch perspectives (book two, My Life as a Walter Boy, is Cole's story and, side note, the cover has a totally different feel than this book...not sure I like it). However, it's hard to be annoyed about a book being turned into a series when I know authors like to revisit characters as much as the readers do. I truly do want to read more about Jackie and the Walter boys.

So now that I've written all sorts of other things...what, exactly, did I love about this book? What made me rate it five stars? It was a really lovely story and I enjoyed every single second I spent reading this book. When I get that immersed in a story it's usually going to be a five star. I loved reading about how Jackie dealt with being thrown into the Walter household. This book reminded me of Jennifer Echols' novels The Boys Next Door/Endless Summer and I loved these books for the same reason - a girl trying to navigate adolescence while immersed in a world filled with boys. So much fun to read about.

I really liked that there was a balance of humorous and heart-wrenching moments. I laughed out loud and teared up. And the emotional aspect of the story didn't just have to do with the fact that Jackie's family had died in a car accident (though that was devastating and I just wanted to give Jackie a big hug). Novak reminded me what it was like to be a teenage girl and trying to figure out who you like and who likes you. Such a range of emotions!

Overall, My Life With The Walter Boys was a really great read. If you're looking for a contemporary YA book, pick up this one. Ali Novak has written an incredibly enjoyable novel. I still can't quite get over that this was her debut! I cannot wait to read the next book in the series and get into Cole's head!

*An eARC was provided by the Canadian distributor, Raincoast Books, in exchange for an honest review.*
Posted by Books Etc. at 6:44 AM