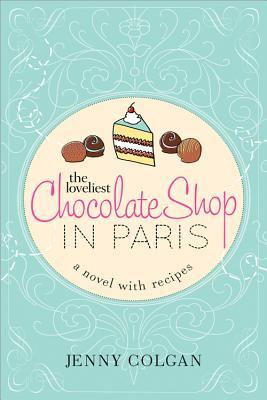 I was expecting a super sweet and fun read when I started The Loveliest Chocolate Shop in Paris by Jenny Colgan. What I got was a chick lit story with much more depth than expected and a story that will make you think about the choices you make in life and living every day to the fullest.


As dawn breaks over the Pont Neuf, and the cobbled alleyways of Paris come to life, Anna Trent is already awake and at work; mixing and stirring the finest, smoothest, richest chocolate; made entirely by hand, it is sold to the grandes dames of Paris.
It's a huge shift from the chocolate factory she worked in at home in the north of England. But when an accident changed everything, Anna was thrown back in touch with her French teacher, Claire, who offered her the chance of a lifetime - to work in Paris with her former sweetheart, Thierry, a master chocolatier.
With old wounds about to be uncovered and healed, Anna is set to discover more about real chocolate - and herself - than she ever dreamed.

It took me ages to finish this novel. That was, in part, due to the fact that I was glued to my TV watching the Olympics and out visiting friends over the couple of days it took me to read the book. It was also because I couldn't bring myself to read the book because I wasn't totally into it. I wanted to finish it so I could move on to my next read but I had no real desire to finish it. It wasn't bad, don't get me wrong. I think many people would love it much more than I did. Maybe I wasn't in the mood for this story. It could also be because I really was expecting a typical Brit chick lit story and there were more serious issues discussed than I anticipated.

I do think the novel should have been shorter. Goodreads tells me it's 416 pages, my eARC said it was 384. I did a quick look at the chick lit novels I've read this year and can see that most of them are between 200 and 300 pages. More pages means more story which is usually awesome...except when it seems to be unnecessary. I think there should have been some trimming done - especially at the beginning, which I found to be very slow.

The story was told in two perspectives, which I both liked and disliked. The majority of the story was told in first person, through Anna's eyes. We also got to see Claire's perspective in the present, in third person, and her past, also in third person and italicized and set apart from the rest of the story (if that makes sense...). It was a little jarring but I really did like Claire's story. In fact, I think it could be a lovely historical story in its own right.

My favourite part of the entire book was the setting. I've never been to Paris (someday, maybe) but I felt like the book really showed what the city is really like. The people who live there, not the tourists. The shops. The buildings. It was all so clear and I loved reading the scenes where Claire experiences the secrets Paris has to offer. And, of course, I loved every single scene that took place in the chocolate shop. Yum.

I liked that the romance kept me on my toes. It wasn't exactly typical. I found myself wondering if what I thought was going to happen actually would happen. It wasn't super romantic either. The male love interest was a little...brash, I suppose, and you never really know where he stands. I'm not usually a huge fan of epilogues or final chapters that totally and perfectly wrap things up but I was glad that the last chapter in this book let me know exactly how the characters were doing after the traumatic event that occurs near the end of the novel. And I don't just mean that I was glad to know if there was a romantic Happily Ever After or not. I really did need to know if the characters were all ok. I may not have loved them all but I wanted to see them do well.

I'll say it again: I may not have been thrilled by Jenny Colgan's novel The Loveliest Chocolate Shop in Paris but that doesn't mean you won't be. If you like your chick lit with a lot of depth, read this one. If you want to read about the real Paris, read this one. I hope you enjoy it!

*An advanced ecopy of this novel was provided by the publisher via Netgalley in exchange for an honest review.*
Posted by Books Etc. at 6:16 AM