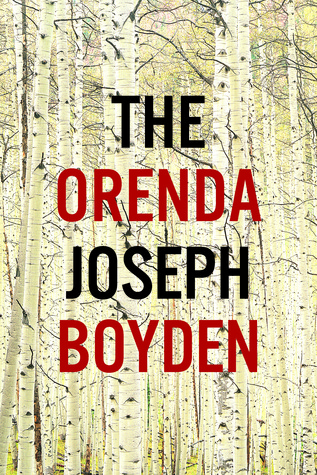 Time for another reading confession: I had never read a Joseph Boyden novel before picking up The Orenda. This might not seem like a big deal to some people but I feel like in Canada it is a huge deal. I knew his name and his novels but I just hadn't picked one up to read myself. When I heard of his latest, released last fall, I knew I wanted to read it. Why? Because it tells the story of the Hurons and they lived in the area where I grew up. I (belatedly) put a reserve in for the book, waited forever, got the book, didn't have time to read it in a week, returned it, re-reserved it, waited forever, got the book, and proceeded to devour it in one day. The Orenda is an amazing novel and everyone, especially Canadians, should read it.


A visceral portrait of life at a crossroads, The Orenda opens with a brutal massacre and the kidnapping of the young Iroquois Snow Falls, a spirited girl with a special gift. Her captor, Bird, is an elder and one of the Huron Nation’s great warriors and statesmen. It has been years since the murder of his family and yet they are never far from his mind. In Snow Falls, Bird recognizes the ghost of his lost daughter and sees the girl possesses powerful magic that will be useful to him on the troubled road ahead. Bird’s people have battled the Iroquois for as long as he can remember, but both tribes now face a new, more dangerous threat from afar.
Christophe, a charismatic Jesuit missionary, has found his calling amongst the Huron and devotes himself to learning and understanding their customs and language in order to lead them to Christ. An emissary from distant lands, he brings much more than his faith to the new world.
As these three souls dance each other through intricately woven acts of duplicity, small battles erupt into bigger wars and a nation emerges from worlds in flux.

I found that I had to take frequent breaks when reading this novel because of how realistic it was. And that realism included a lot of violence. Yes, I found some of the scenes particularly hard to read (especially when a tribe was 'caressing' - torturing - their prisoners) and I'm sure my scrunched up face would have looked hilarious to anyone watching me read. But as much as I hate reading about violence, I knew it had to be included. Leaving it out would have left huge holes in this story. This is just one example of how Boyden does an amazing job of inserting the reader into the story through the writing and the details he gives.

I loved that there were three viewpoints in this story. Truthfully, it did get a little confusing at times because each chapter was told from the perspective of a different character and it sometimes took me a few sentences to figure out who was telling this part of the story. The three characters have very different viewpoints on their world. One, Bird, is a powerful man in his tribe and he has lost his family to his enemy. Another, Snow Falls, was captured as a young girl and adopted by Bird. Finally, Christophe is one of the Jesuits who was sent to convert the Natives. We can see how the Hurons felt towards the Jesuits, they called them crows or charcoals, and how the missionaries perceived the Hurons, or sauvages as they called them. Through Bird we learn what it was like to hunt and protect the village. Through Snow Falls we learn what it would have been like to become a woman in a Huron village. Through Christophe we learn how hard it was for the missionaries to convert the Natives and learn the ways of the tribes. Having just one perspective would not have done this story justice and the three viewpoints are woven together wonderfully.

The Orenda is one of the five finalists in this year's Canada Reads competition. The theme for this year's contest is books that could change the nation. While I think this novel would have made its way into the finals no matter what the theme was (it seemed like everyone was talking about, and loving, this book when it was released), I do think the category is very fitting for this book. Why? Because more attention needs to be paid to the Native history in our country. I haven't read any of the other finalists' novels and I don't know if I'll get to them before the debates (being held in March). So, I wonder, is it wrong to root for The Orenda because it's the only one I've read? :)

I want to get back to the historical aspect of this novel and why I wanted to read it in the first place. I grew up in Midland and I knew that the Hurons used to live in that area. We have Saint-Marie Among the Hurons and the Huronia Museum. There's a reserve close by on Christian Island and once those students reached high school age, they took the ferry and a bus to come into the school in town. Other than those facts and somehow retaining the knowledge that the three sisters are corn, beans, and squash, I don't remember learning much about Native history growing up. Thinking about that now, I find it incredibly sad. I had no idea the Hurons were essentially wiped out during the Huron-Iroquois wars. I didn't know how Christian Island even became settled. I couldn't remember where Samuel de Champlain and Jean de Brébeuf lived and I certainly had no idea St. Ignace or the missionary Gabriel Lalemant even existed. Reading this novel made me interested in Midland's history and by doing some research (admittedly just on Wikipedia, at least for now) and paying attention to some of the places names mentioned in the book, I think I figured out where some of The Orenda was set and who some characters, the missionaries in particular, were based on. I hope that others who read this will feel the same way and will start to look into this history more themselves.

And can we just take a moment to ogle this cover? Go on, scroll back up to the top. I'll wait. *hums tunelessly* I can't say exactly why I love it but I do.

The Orenda is a novel that everyone should read. Joseph Boyden has put the spotlight on a time period that doesn't get the respect or attention it deserves. The story he tells is just a small part of the overall Canadian story but this historical fiction work will, hopefully, make readers interested in learning more about their nation's history. This post is especially timely as The Orenda is now out in paperback in Canada (Americans, the novel will be released in hardcover in May). Read this book. You won't regret it.
Posted by Books Etc. at 6:26 AM